Ariel Ruggeri has cut back on going out with friends after work and is staying in more on the weekends.

But she’s working toward a goal popular among younger millennials: She wants to save.

A Bankrate Financial Security Index survey finds 3 in 5 U.S. adults are limiting their monthly spending. The most common reason is to increase savings, and that’s particularly true for Americans between ages 18 and 26. About three-quarters of them (74 percent) say they need to put more money away.

“When unplanned expenses arise, nothing is more reassuring than having money socked away in savings,” McBride says.  “And for longer term goals, time is your greatest ally.” 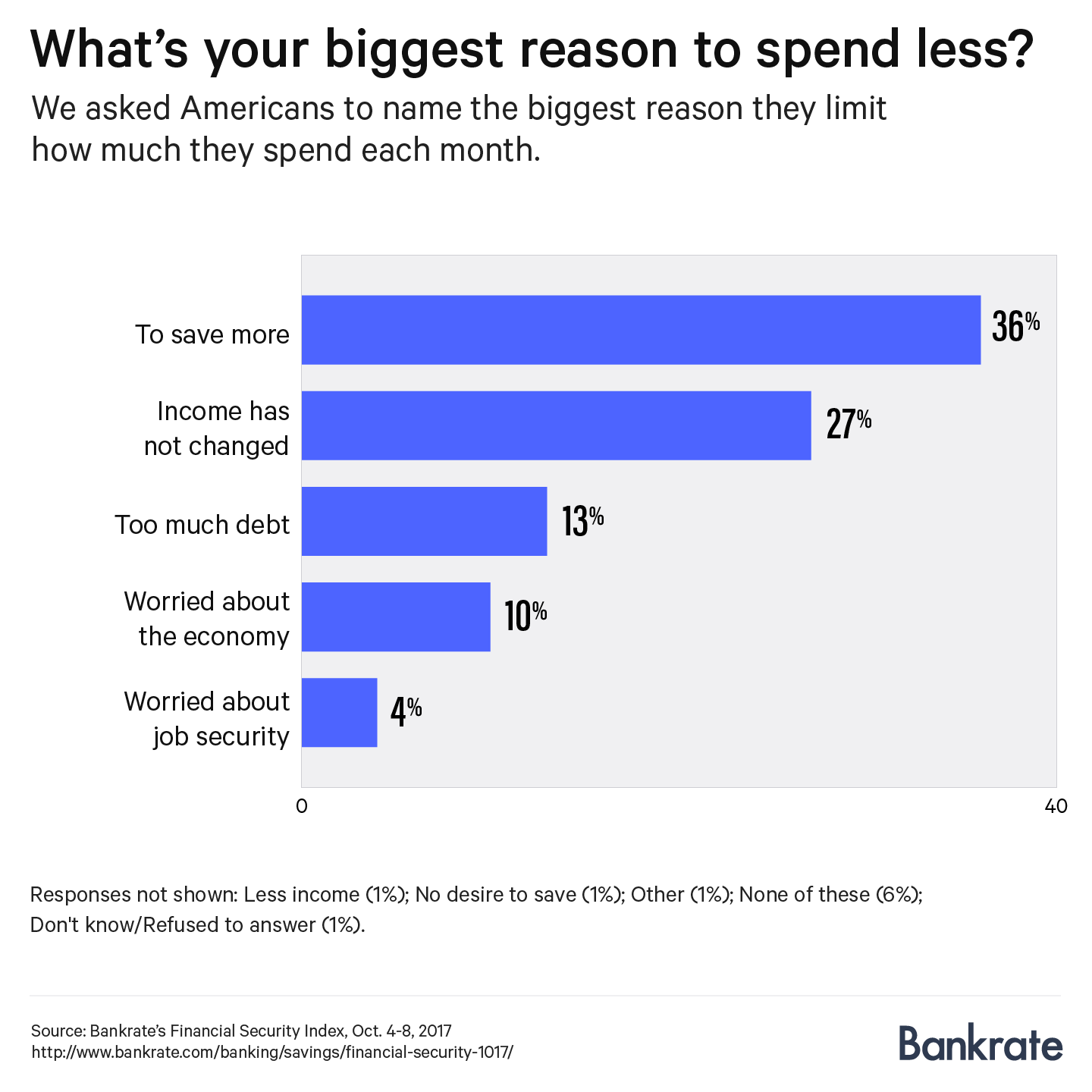 Millennials commit to save

Ruggeri decided on Oct. 1 that it was time to save.

She was frittering away her paycheck without much thought — and without having any savings for emergencies.

Bringing her lunch to work, instead of spending $15 every day, has proven relatively easy. Trimming her social calendar has been tougher. Nevertheless, she has been able to save about $700.

Jordan Slavik also has tried to find ways to stretch a dollar, and also has found challenges.

“It’s been somewhat ebb and flow,” says Slavik, a 25-year-old University of Maryland grad student. “There have been times when my wife and I buckled down, and then life happens and you get away from your plans.”

A bit of life that recently happened was the birth of their daughter. To help keep down costs as they save up to buy a house sometime soon, Slavik and his wife have decided to use cloth diapers and homemade cleaning sprays.

No time to waste

Young workers are right to be concerned about amping up their savings – both for the short and the long term.

Only 4 in 10 Americans have savings that could cover an unexpected $500 expense, according to an earlier Bankrate study.

Meanwhile nearly half of all households don’t have enough retirement money put aside to keep up their current standard of living in their later years, according to the Center for Retirement Research at Boston College.

No matter what age you are, it’s paramount to have an emergency fund comprising three to six months’ worth of expenses, and to stash away in a retirement account at least 10 percent of what you earn.

Katharine Perry, associate financial consultant at Pittsburgh-based Fort Pitt Capital Group, tells clients to document where each dollar is going, and then question if it could be better used elsewhere, such as in a high-yield savings account or 401(k).

“Don’t spend just to keep up with your peers,” Perry says.

Other reasons for spending cutbacks

Among Americans of all ages who are being careful with spending, saving is the top reason, cited by 36 percent in the survey.

Another 27 percent tell Bankrate they’ve scaled back because they haven’t received a pay raise. Stagnant income can put a strain on your finances, especially as health care and other costs rise.

And, 13 percent say debt is the main culprit behind their reduced spending. Credit card debt is at an all-time high, as are student loans. Jordan Slavik says he’s holding down spending not only because he wants to save but also because of college IOUs.

It’s critical to address credit card debt, because it can saddle you with high interest charges and damage your credit score. Balance transfer credit cards can help give you more time to pay off your debt without accumulating any new interest. 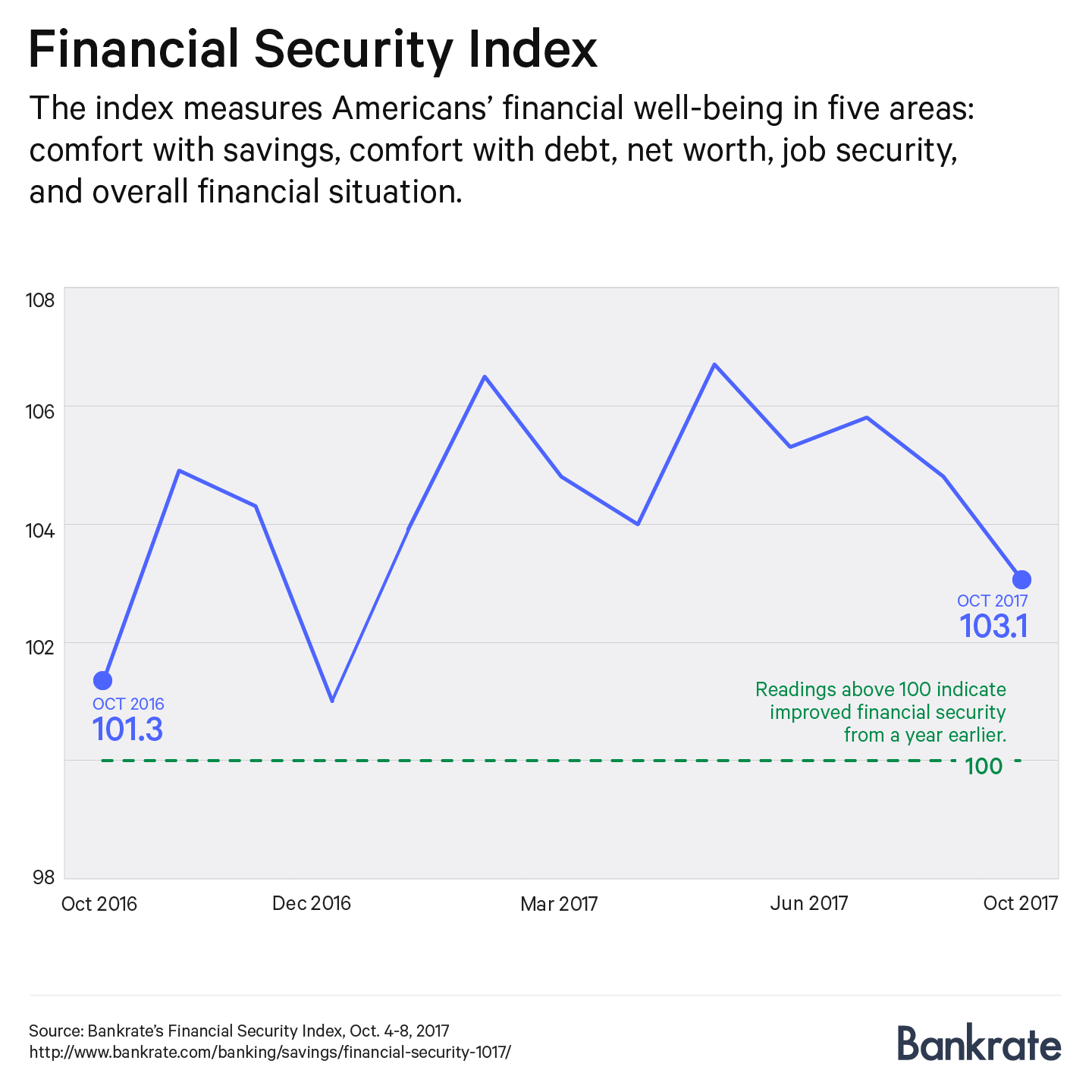 Financial security down but still positive

The Bankrate Financial Security Index fell in October for the second month in a row, to 103.1. While any reading over 100 indicates improved financial security versus a year ago, the current reading is still the lowest since January.

Americans’ feelings about their job security, net worth and overall financial situation — three of the five components making up the index — all have gone up from where they were 12 months ago, while comfort levels with savings have gone down. Comfort levels with debt are unchanged.

Bankrate’s survey was conducted by SSRS, which obtained telephone interviews with a nationally representative sample of 1,008 adults living in the continental U.S. Interviews were conducted Oct. 4-8 via landline and cellphone, and the statistical results are weighted to correct known demographic discrepancies. The margin of sampling error for the complete set of weighted data is plus or minus 3.8 percentage points.