Way to go, savers! There are more of you out there, putting more money away in case of a financial emergency.

Only 24 percent of adults now say they have no money saved for an emergency like a layoff or a huge medical bill, according to Bankrate’s June Financial Security Index survey. That’s the lowest level since polling began in 2011.

Also, 31 percent have what’s considered an adequate savings cushion: enough to cover six months’ worth of expenses or more. That’s the highest Bankrate has seen in the seven years we’ve been asking about that.

But, looking at the flip side, the findings mean about a quarter of Americans still don’t have any emergency fund. And more than two-thirds are short on savings.

If you’re in either of those groups, it’s time to get on board! Shop for a savings account and up your savings game today. 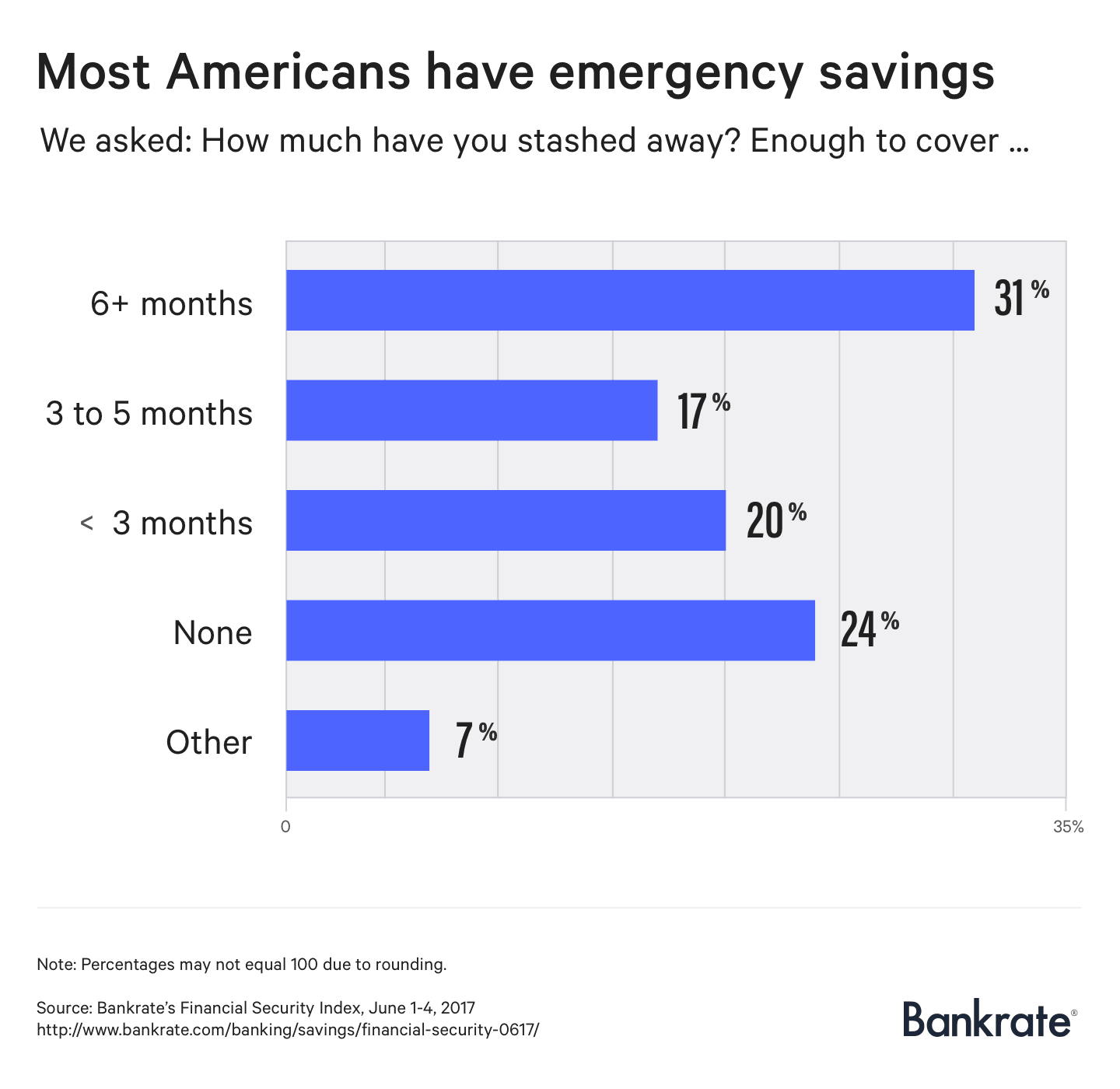 Getting into the habit

Barely saving can be just as bad as not socking away anything. Blair and Ryan Critch of Fort Lauderdale, Florida, learned that the hard way.

When the housing market crashed, they lost everything and had to file for bankruptcy. Back then, they had emergency savings to cover just two months.

“We wish we had had more money saved up in the bank,” Blair Critch says.

She became a network marketing expert, and her husband opened a real estate office, Ocean400 International Realty. Now with eight months’ worth of emergency savings and over a million dollars in earnings, the couple are teaching their sons the value of saving for a rainy day.

Building an emergency fund starts with automating your savings.

“You have to be in the habit of regularly contributing to your savings, ideally, with a direct deposit from each and every paycheck,” says Greg McBride, CFA, Bankrate’s chief financial analyst.

Falling short of the goal

Experts recommend having enough savings to cover expenses for three to six months. If you’re an entrepreneur or breadwinner, McBride says, you may need to save more.

Bankrate’s survey finds 1 in 5 adults has some savings but not enough to pay the bills for the three-month minimum.

To help you reach the three-month savings target, put any extra money you make into a high-yield savings or money market account. If you get a bonus at work, for example, avoid the temptation to upgrade your house or car, says financial planner Brian White, president and owner of Century Financial.

“Save the entire amount and continue to live as if you never got a bonus,” he says.

Moving up the ladder, 17 percent of Americans have enough savings to cover three to five months’ worth of expenses. Younger millennials — those between ages 18 and 26 — are most likely to fall into this camp.

“A lot of them (millennials) have seen their parents suffer financially through the recession, and so they are trying to be savvier with their money,” says consumer savings expert Andrea Woroch.

That leaves the group maintaining adequate savings, enough to cover expenses for at least six months. The survey shows it represents 31 percent of Americans — the highest in seven years. 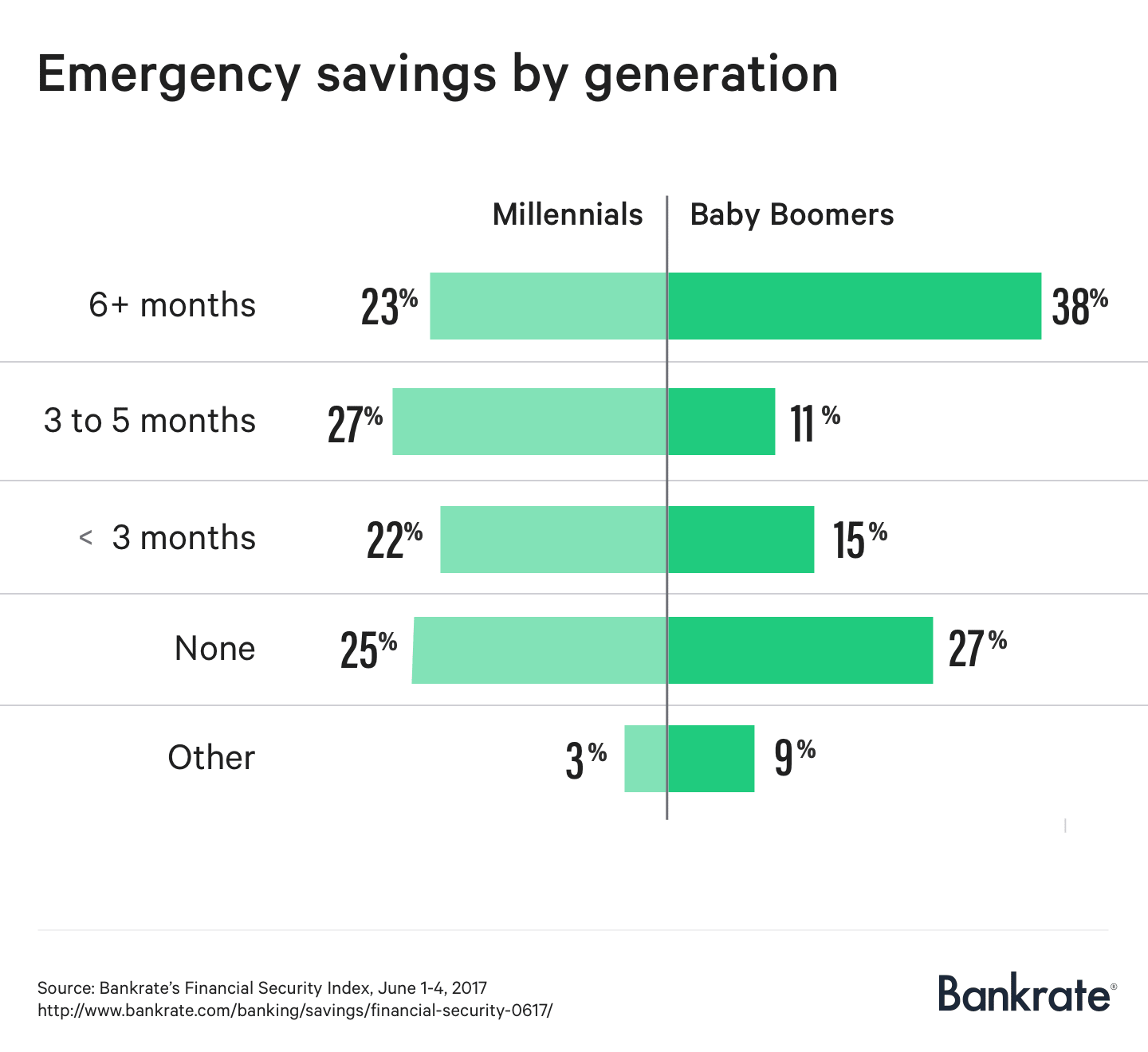 To take your emergency savings to the next level, Woroch suggests doing freelance work or selling unwanted items. Comparison-shopping and couponing offer other ways to save money and grow your rainy day fund.

Consider investing in a certificate of deposit as well. Compare deals among the top CD rates.

If you’re struggling to save for emergencies and retirement at the same time, find out whether you can open a Roth IRA.

“You can always use the Roth IRA to pull out any contributions you have made at any given time that’s tax-free and that’s penalty-free,” says investment adviser Brent Sutherland, owner of Ntellivest.

Bankrate’s Financial Security Index itself has reached an all-time high, reflecting the confidence that recently led the Federal Reserve to hike interest rates for the third time in six months. 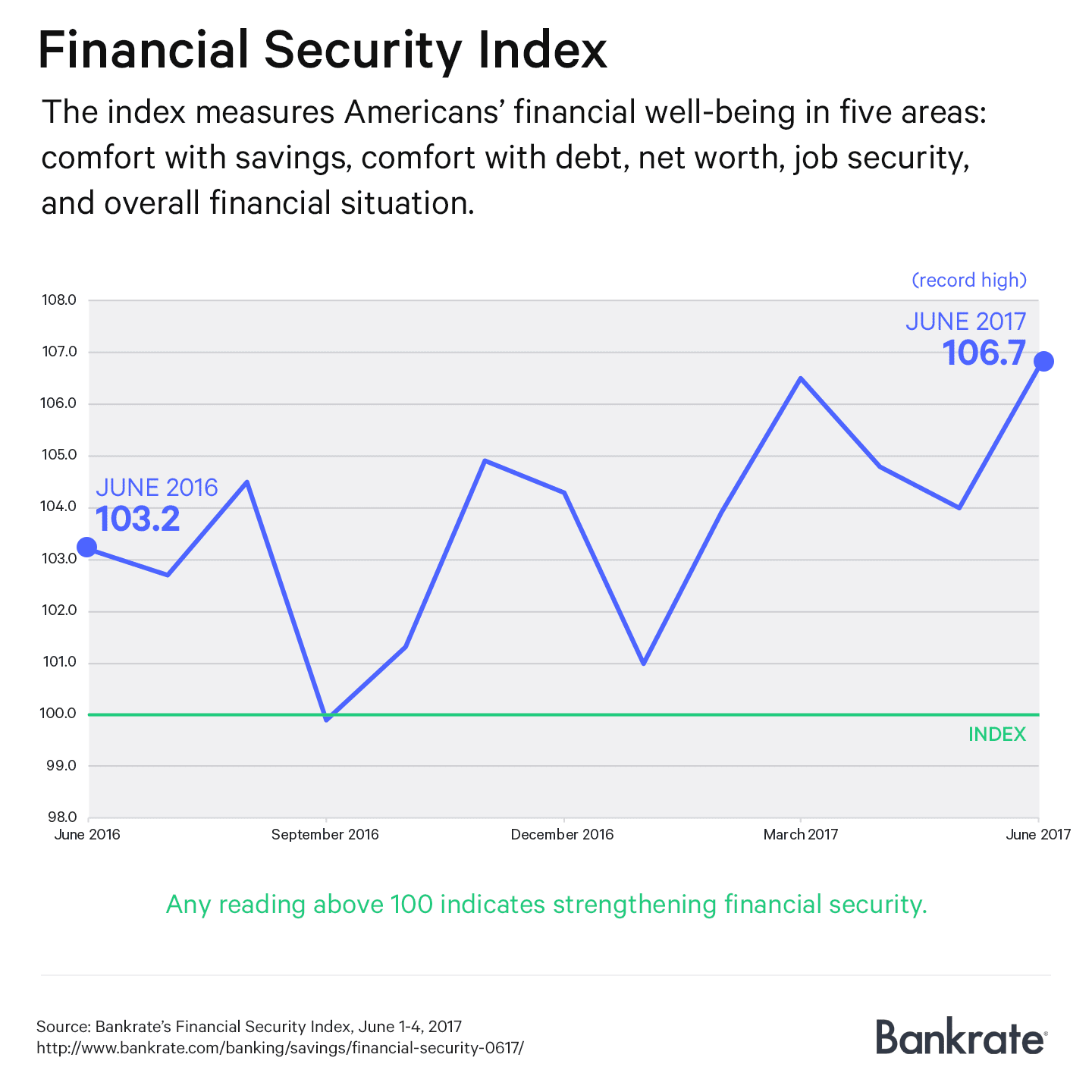 The index tracks Americans’ job security, net worth, comfort levels with their savings and debt, and overall financial situation. All five components show improvement from last June and last month.

The net worth reading is the strongest ever, with Americans who say their net worth is higher than a year ago outnumbering those who say it’s lower by a ratio of 3 to 1.

The survey was conducted by Princeton Survey Research Associates International. PSRAI obtained telephone interviews with a nationally representative sample of 1,003 adults living in the continental United States. Interviews were conducted June 1-4. The margin of sampling error for the complete set of weighted data is plus or minus 3.7 percentage points.