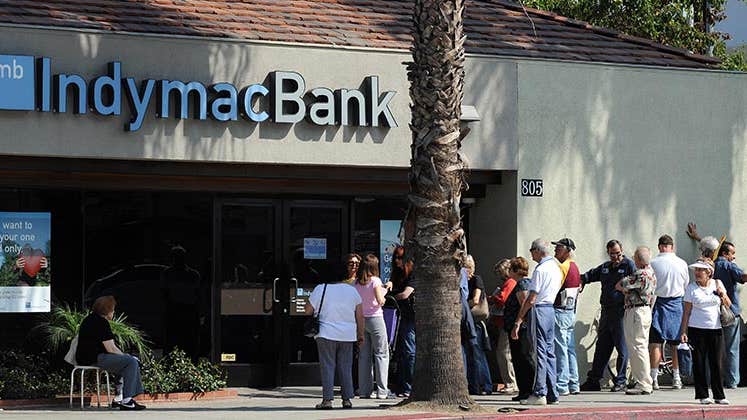 Most bank failures end in a sale — the Federal Deposit Insurance Corp. takes on the defunct bank’s troubled assets, a healthy bank buys the rest, and customers’ accounts keep right on going. But when a buyer can’t be found, things can get more complicated for account holders.

The process of permanently closing a bank and its branches, selling off any assets and using the proceeds to settle as many of the bank’s remaining liabilities as possible. Typically, customer accounts are closed and checks are mailed to account holders for the amount of their insured deposits.

In a typical bank failure and sale, you may see a different name on the bank’s door and some changes to your account’s terms and conditions, but you don’t have to do much to keep money flowing in and out of your checking account.

“Essentially, the FDIC comes in on Friday afternoon after closing, relieves the existing management of authority and takes everything over, and usually by the following Monday morning they’ve reopened under the banner of the acquiring bank,” says Rebel Cole, professor of finance at DePaul University in Chicago.

But in rare cases — about 6% of bank failures since 2000 — the FDIC has been unable to find a buyer for the bank.

When this happens, the FDIC tries to sweeten the deal by offering just the deposit accounts for sale. If that fails, the only option left is usually liquidating the bank, cutting account holders a check for their insured deposits, and trying to help account holders move on as best they can. The FDIC is most likely to pursue this option if the bank is very small or if most of the deposits are from institutional investors or large businesses, Cole says.

The last time a liquidation happened was Sept. 13, 2013, when The Community’s Bank of Bridgeport, Connecticut, was closed down by the FDIC.

Ultimately, getting your money back is the biggest concern in a bank failure, and the FDIC is the reason no one has lost a penny of insured deposits since the agency was founded in 1933. Still, that doesn’t mean having your checking account suddenly stop working is entirely painless.

For one thing, bank failures are sudden and unexpected — by necessity. To prevent a mass exodus from the bank before it’s taken over, the FDIC keeps its troubled-bank list a closely guarded secret.

You can deposit your paycheck on a Friday afternoon and return Monday to make a withdrawal, only to find the bank out of business for good.

After that happens, generally speaking, any payments that haven’t cleared the account, including checks, will fail. Those bounced checks won’t go against your credit, but account holders are responsible for making sure the bills are ultimately paid, not the FDIC.

Direct deposits into your account at the failed bank may also need to be quickly rerouted to a new account to avoid bouncing back.

One bright spot: Former account holders who show up to branches will find FDIC staff inside, ready to answer questions and offer whatever assistance they can.

In some cases, the FDIC will reopen defunct banks as FDIC-controlled entities for a limited time, often with the help of a local institution, to “provide continuity of service to the depositors and minimize the problems the resolution is imposing on the institution’s depositors,” Cole says.

When New Frontier Bank of Greeley, Colorado, failed on Friday, April 10, 2009, it reopened the next Monday as Deposit Insurance National Bank of Greeley and continued checking services, including direct deposit, until May 8, when it was shut down for good.

If a bank is big and important enough to the local economy, the FDIC may keep it going for much longer. After the California-based IndyMac Bank failed, it stayed open from July 14, 2008, until March 2009, when the deposits were picked up by OneWest Bank.