Payday doesn’t come soon enough for many workers trying to keep their finances in order during the coronavirus crisis.

Companies such as Earnin and Even make it possible to get advanced access to wages. But critics and consumer advocates say these programs can be harmful for people constantly falling behind on bill payments.

One alternative may be early direct deposit, a feature becoming more popular among banks and credit unions.

Early wage access programs seek to solve the problem of having to wait two weeks to get paid, a big issue for frequent overdrafters and consumers living hand to mouth. The idea is to get a portion of your take-home pay in advance, before your paycheck is scheduled to arrive. When your paycheck finally comes, however, you’ll have less money at your disposal.

Terms and conditions vary depending on the way a program is set up. In some cases, fees are charged. There may also be rules controlling how often you can get access to part of your check before payday.

Research shows that participants use advanced wage access benefits frequently, and in some cases, dozens of times per year. Issues that arise are similar to those faced by consumers burdened by payday lenders, says Lauren Saunders, associate director of the National Consumer Law Center (NCLC).

“They are better than a payday loan,” Saunders says. “The cost is lower. They don’t engage in the same harassing, debt collection activities. But they have a lot of the same problems: a balloon payment that leaves you in a bad position, fees that add up and overdraft or (non-sufficient funds) NSF fees for those services that debit the bank account.”

Others agree that the programs, though convenient, can make a difficult financial situation worse for consumers who struggle with managing their finances.

“The relief may be short-term, and I use the term palliative, meaning it doesn’t get to the underlying problem that people often have and it can result in just falling further behind if nothing else changes,” says Corey Stone, entrepreneur in residence at the Financial Health Network.

Class action lawsuits filed against Earnin say the optional tip customers are encouraged to pay is the equivalent of paying fees and interest on a loan. The complaints also claim that the risks of using the app — like incurring overdraft and insufficient funds fees — had not been clearly disclosed. The company has been investigated by others, including the New York Department of Financial Services.

The NCLC released a brief in March highlighting the problems with advanced wage access programs. Though they differ in their approach — with some offering early access to wages through employers and others providing the service directly to employees — what consumers often end up with is essentially a short-term loan, the NCLC says.

The companies providing early wage access disagree. Earnin, for example, insists that unlike a lending arrangement, customers have no legal obligation to repay anything or cover any mandatory fees. Whether they leave a tip doesn’t affect their ability to use the app.

“Earnin’s core product, Cash Out, allows people to track and access wages they have already earned with no mandatory fees,” says company spokesperson RJ Bardsley. “Earnin falls under the CFPB’s rules governing no-fee products. I would suggest that, actually, the traditional payday cycle means you’re basically giving your employer an interest-free loan for two to four weeks, depending on the pay cycle.”

Investigations across multiple states aim to determine whether early access services are considered loans that should be subject to lending laws, says Saunders from the NCLC.

Consumers who want to use early wage access programs should consider the consequences of doing so.

“Think twice about whether you’re going to be able to handle the next pay period if there’s a hole in your paycheck,” Saunders says. “Wean yourself off of it. Take out less if you need to the next time.”

It’s best to refrain from using the services often and to reserve them for emergency situations only. Better yet, try to grow an emergency fund in a high-yield savings account that you can tap into, if needed, without paying fees or getting caught up in a debt cycle. Don’t have emergency savings? There are ways to change that.

Another option is to open an account at a bank that offers early direct deposit. With this feature, banks and credit unions can usually provide full paychecks up to two days early. Prepaid debit card providers offer early direct deposit, too. Some — like Green Dot and Walmart’s MoneyCard — note that government benefits may be accessible up to four days early.

Typically, there’s a delay between when a deposit arrives at a bank and when those funds are made available. There’s no risk or additional cost for the bank to make those funds accessible to customers immediately, says Stone from the Financial Health Network. There aren’t any risks for consumers either and no additional fees besides any attached to the bank account itself.

“We offer early direct deposit because it delivers a significant benefit to our customers,” says Wesley Wright, chief operating officer at Varo. “Most Americans live paycheck to paycheck. Getting paid one to two days early allows them to pay crucial bills on time, and go shopping for family essentials earlier in the week.” 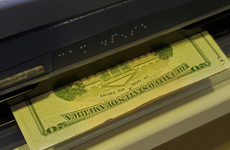 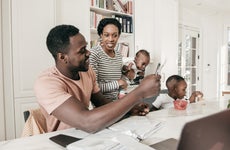 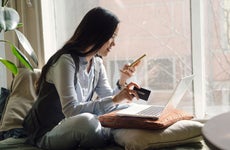 Online cash advance: What is it and what are its alternatives? 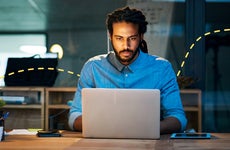 What is direct deposit? Here’s how it works