Robert Svaia is about to make a choice that he says will feel like a chore.

The day will come in about two months’ time, on the first Tuesday of November, when hundreds of millions of other Americans will also confront a similar consequential decision. Except the 25-year-old Chicago-based designer wishes he could see it that way, when he heads to the polls to cast a vote for either former Vice President Joe Biden or President Donald Trump during the 2020 presidential election.

“I will be voting for Biden, but it’s difficult to look at Biden with optimism,” Svaia says. “I don’t think anyone is going to be jumping out of their seats if he wins. People are exhausted, and maybe they let out a sigh of relief a little bit, but nothing is really going to fundamentally change the next day.”

In a pivotal election, many young voters remain unsure on at least one key issue

Political analysts are calling the November vote one of the most pivotal in modern history. But young people — many of whom are coming of age during an unprecedented pandemic while others have grown up in the shadow of some of the worst economic downturns and terrorist attacks in American history — have set the stage for a pervasive generational gap that has also become a political one.

That might be the driving force behind the results of a new Bankrate survey, which found that younger voters were more likely than older individuals to not know which candidate would be better for their personal financial situation.

More than a quarter (27 percent) of Generation Z (those between the ages of 18 and 23) and 23 percent of millennials (ages 24-39) said they were undecided over whether the Democratic or Republican ticket would be better for their personal finances. That compares with 18 percent of Generation X (ages 40-55), 6 percent of baby boomers (ages 56-74) and 3 percent of the Silent Generation (age 75 and older). 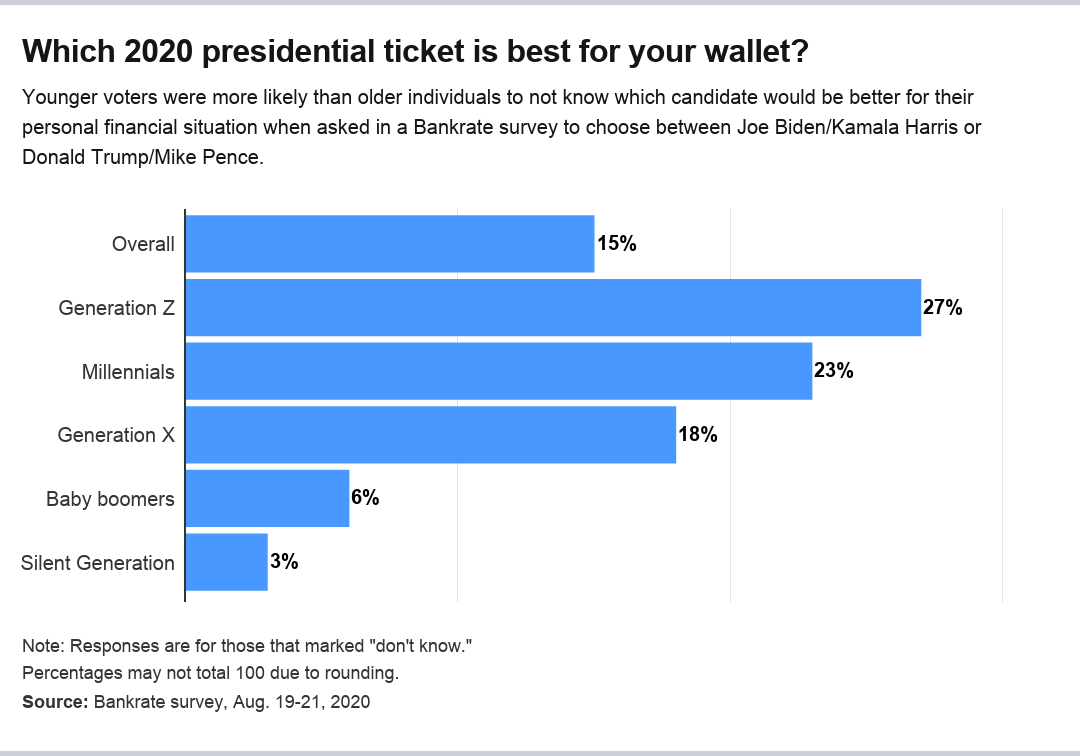 “A substantial number of younger people indicated they are undecided on at least the personal finance question,” says Mark Hamrick, Bankrate’s senior economic analyst. “Since we do not know their intention to vote overall, we cannot say for certain how many have yet to decide, but undoubtedly there are some.”

Experts, however, believe that the young voter disillusionment issue is only part of the story. At the heart of the divide might also be financial literacy, campaign messaging and a uniting opinion that personal finance might not be what young voters are keeping their eyes on.

“Just because these issues don’t rise to the top doesn’t mean they aren’t important issues for young people. But financial issues really aren’t at the front-and-center,” says Rey Junco, director of research at Tufts University’s Center for Information and Research on Civic Learning and Engagement.

From health care to taxes, Biden and Trump’s policies can impact your wallet

Biden and Trump haven’t been quiet on the personal finance front. In one way or another, virtually all of the candidates’ policies are wallet-impacting.

Biden has adopted many of the progressive education and college-affordability policies donned by Sen. Bernie Sanders of Vermont, including making tuition at colleges and universities free for families who make less than $125,000 a year. The candidate also wants to exempt individuals who earn $25,000 or less a year from making payments on those educational loans, while ensuring that everyone else pays no more than 5 percent of their discretionary income for up to 20 years, after which that debt would be cancelled.

Meanwhile, Trump’s push to roll back long-term capital gains taxes, explore another tax cut and create new tax credits could free up cash for Americans, while offering a modest boost to economic growth that some analysts say may spur job-creating investments.

“Nobody has a plank in their platform about personal financial health,” Junco says. “Candidates just don’t go out there and say, ‘I’m going to make you more money or your income is going to be better when I’m president.’ They say things like, ‘I want to pause payroll taxes or reduce taxes,’ which are all personal finance. But that messaging is important.”

Are young people at an economic disadvantage?

Svaia says he never looked at the 2020 elections from a personal finance perspective and is more so interested in what candidates’ policies mean for social issues, with some of his top policy priorities being Medicare for All and cancelling student loan debt.

The Chicago resident has seen that opinion shared among other young voters and notes that others might not care about the personal finance issues as much because they feel resigned to a lifetime of uneven and disparate economic opportunity, which first started in the aftermath of the Great Recession and has only been exacerbated at the hands of the coronavirus’ economic upheaval.

“We just don’t have access to the same investments that other generations have had in the past,” Svaia says. “Young people like myself have accepted that we’re at a disadvantage economically because of an entire system that was really designed against our generation.”

Svaia says he’s seen colleagues who graduated 10 years ago, in the aftermath of the Great Recession, who are now in a similar stage of their careers as him, even though he graduated in 2016. He foresees that repeating again. “People who graduate in 2021 are also going to be at a setback because of low hiring,” he says.

Still, he sees financial literacy as another culprit for why young voters don’t know whether Biden or Trump would offer a better outcome for their finances. “The hope is that maybe a Democratic president might do something with students, which could free up some money for savings or other investments,” Svaia says. “But I mean, I don’t know if the stock market would be less volatile in a Biden administration than Trump.”

One financial adviser’s push to talk about politics more

Many have approached him with questions about what kinds of investment decisions they should make in the run up to the 2020 elections, including whether they should sell any of their assets if Biden or Trump wins the presidency. He finds himself cautioning them to diversify their portfolios but make little adjustment after that.

“The people that least want to talk about politics are advisers, but it’s the elephant in the room,” Kahler says. “The first thing we need to be willing to do is talk about it, and I don’t know how you move past anything by not talking about it or sweeping it under the rug. It really sets things up for misunderstanding.”

Kahler has clients all across the age spectrum, but most of them are older. Still, he has seen a growing sentiment among younger Americans that Biden doesn’t align with their ideologies.

But he also has witnessed confusion among young voters about how to specifically define the ideologies they agree with and the problems they take issue with, such as capitalism and socialism. Part of that might be because of a lack of personal finance education in schools, as well as a lack of experience.

“They just don’t have the years of living to where they can form a hard-and-fast opinion,” he says. “As much as they’re more focused on the social issues than the financial issues, which makes sense, they haven’t had time to accumulate wealth, get their careers established and start earning money.”

The listening component is going to be important, particularly to voters like Svaia. He says he feels like politicians aren’t learning about young voters and the issues they are passionate about. He blames that partially on the way the system is set up, with minimum age requirements for senators, representatives and presidents.

“The current power structure in this country is older and wealthier, and it’s just not equipped to handle the issues that we’ve faced based on our experiences,” Svaia says.

But regardless of Americans’ political views, it’s hard to ignore how much these divided times have the power to shape individuals’ personal finances. It wouldn’t be a bad idea to build up a fund for emergencies, as lawmakers in Congress are gridlocked over enacting more aid.

Meanwhile, Kahler recommends the same advice to everyday Americans that he says to clients: Diversify your assets, and don’t make impulsive decisions. Younger Americans may also be able to afford having 100 percent of their assets in an index fund and weather election volatility, but that advice might not apply to older Americans who are thinking about retiring soon.

“There’s a huge slice, and always has been a huge slice, of Americans that don’t pay attention, that don’t vote or only pay attention a week before the election,” he says. “You’ve got to look at politics and say, well, ‘How concerned are you? How important is this? And is this something to get in place today?’ Because if there’s a Democratic sweep and a bunch of bells and whistles in the tax code go away, you’ll never be able to access [them] again. And boy, you better hop on that bandwagon right now, because you can’t wait until after the election to get this in place.”