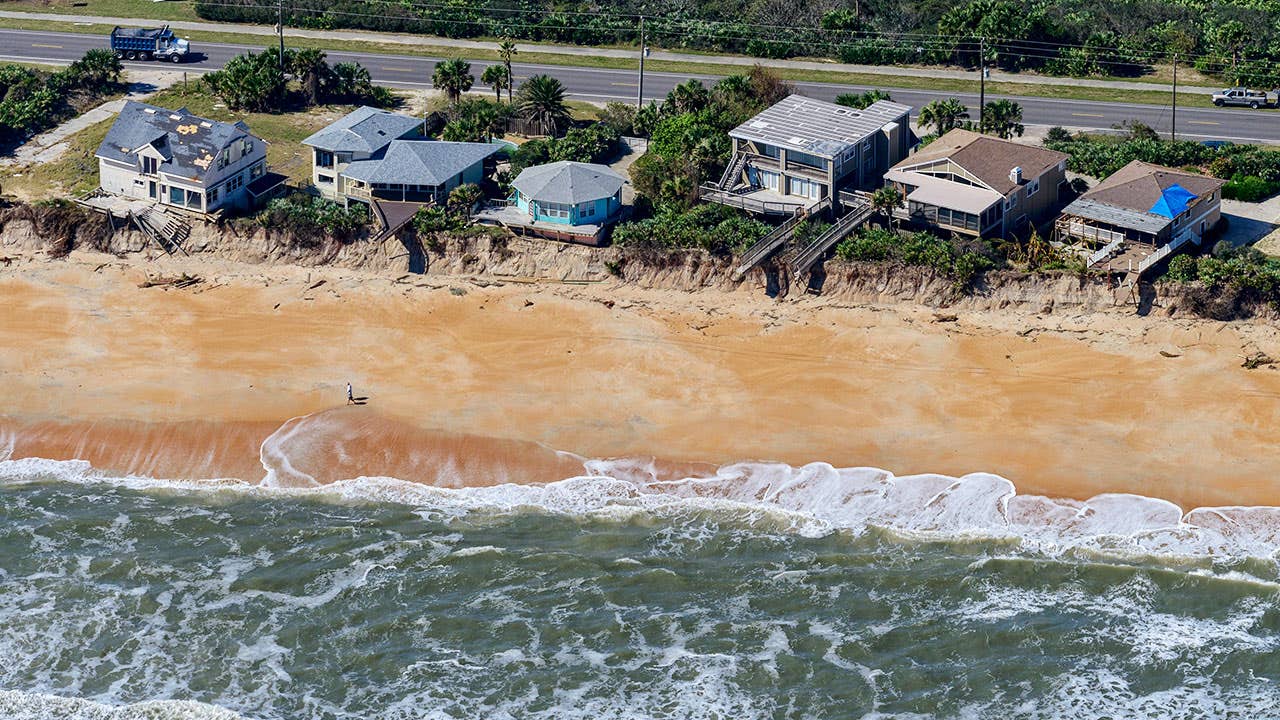 When Simon Mercs moved to Daytona Beach, Florida, 40 years ago, he had to walk across a half mile of soft, coquina-dotted sand, through warm tidepools and across sand bars before his toes ever touched the Atlantic Ocean. Today, the same beach has severely eroded, shortening his trek to about 20 feet.

Like the coastal cities on the Eastern Seaboard, Daytona Beach is battling extreme erosion caused by storm waves and rising tides.

“I moved to Daytona in 1974 when I was 14. It was a huge beach, it was absolutely amazing. That’s all gone now. Today, when there’s a big storm, there is no beach,” Mercs, who owns The Kit Factory, says.

For about 2,000 years sea level has been stable. There were periods of warming and cooling but nothing drastic. In the last 150 years, since the Industrial Revolution, sea levels have taken off like a rocket and now it’s one inch per decade, 1.25 inches to be exact, of sea level rise, says Josh Willis, climate scientist at NASA.

This is something you can’t ignore if you want to buy a house on a coast. There are places that used to get hit with storms only once a century, known as 100-year storms, now they’re getting hit every 10 years, Willis points out.

“You might buy a house with a 30-year mortgage and you might be okay for two-thirds of it, but then you’re going to get slammed,” Willis says. “You start asking yourself if it’s not cheaper to move.”

For homeowners on the Eastern Seaboard, the impact of tidal flooding, caused by sea level rise, is enormous. The property value loss between 2005 and 2017 in 15 East Coast states, Alabama, and Mississippi was $15.8 billion, according to analysis by non-profit group First Street Foundation and Columbia University.

As hurricane season approaches, officially beginning on June 1 (although the season has started earlier four of the past six years), many residents on the East Coast are still recovering from last year’s devastating storms.

In 2018, two record-breaking hurricanes, Hurricane Florence in September, followed by Hurricane Michael in October, claimed nearly 100 lives and caused billions of dollars in damage across Florida and the Carolinas. Communities like Mexico Beach, Florida, which was all but demolished by Michael, the first category five hurricane to make landfall since 1992, are still recovering from the disaster.

But for people like Mercs, a longtime resident who doesn’t plan on leaving, hurricane season is a risk that doesn’t outweigh the rewards. His own experience with hurricanes cost him a leg but left him more prepared to face these violent storms.

In 2004, a sheet of plywood Mercs used to protect his windows from Hurricane Frances came loose in the storm, so he climbed a ladder to nail it back onto the frame. But a powerful wind tore the plywood off the house as Mercs clung to it, sending him soaring.

“A huge gust caught me and I was thrown over the house like the Silver Surfer, and then I came crashing down,” he says.

While he was in the hospital for his injuries, he got a difficult-to-treat staph infection called MRSA, short for methicillin-resistant staphylococcus aureus. The only option was to amputate his leg, he says.

Fifteen years after Frances, Mercs has swapped the plywood for steel reinforced shutters, steel panels, and double-glass pane windows. He’s also bought back-up generators, a rain barrel and keeps a firearm ready. The firearm, he says, is important if a storm has lasted a couple weeks — which is usually when looters and other criminals surface, he says. All told, he’s poured more than $20,000 in upgrades, which he considers a worthwhile investment.

“I’ve lived through so many hurricanes, but I love it here. I’m a beach guy. I love the sound of the waves and the smell of the salt air,” he says.

And he’s not alone. Many homebuyers are undeterred by the dangers of sea levels rising, says Frederick Peters, CEO of Warburg Realty in New York.

“While New Yorkers are certainly aware of the dangers of sea level rise, especially as it relates to the many parts of the city which are low-lying, it has remained an out-of-sight, out-of-mind issue for many buyers and owners in threatened locations,” Peters says.

Like Mercs, rather than moving away, New Yorkers are looking for ways to make their homes and investment properties more resistant to storms. For example, many buildings are moving boilers from the basement to the roof, where they’re less likely to be damaged by flooding.

After superstorm Sandy, beach communities like the Rockaways have focused on flood prevention, such as elevating homes off the floodplain, as housing is being rebuilt.

“Make sure apartment buildings have emergency plans which ensure that both electric and heat can be provided in the event of flooding,” Peters advises.

Before you fall in love with a house, find out if it’s in a flood or catastrophe zone, says Mike Gulla, director of underwriting at Hippo Insurance. But beware, in many states sellers don’t have to disclose whether the home has ever flooded or if flood insurance is required.

In fact, 21 states — including some of the most flood-prone, like Florida, Missouri and New York, have some of the worst disclosure laws, according to a joint report by the Natural Resources Defense Council (NRDC) and Columbia University’s Sabin Center for Climate Change Law.

“Every day, homebuyers apply for a loan, get approved and then realize they’re in a flood plain or high catastrophe zone or a high brushfire zone. And that’s when they find out their insurance is as much as their mortgage payment,” Gulla says.

To get more information, go to FEMA’s website and enter the address of the house you want to buy to see if it’s in a flood zone. This will give you some idea about your risks and whether you need flood insurance. Also, talk to people who have lived in the area for many years to get a sense of what kind of weather-related damage the house and neighborhood has faced.

In South Florida, Port St. Lucie homeowner Guy Lofgren bought creek-front property with ocean access, which required flood insurance. The owners had to disclose that the property was previously underwater.

“All of the homes in the gated community had water within feet of their doors. I was told by one of the neighbors to build either on pilings or just a foot or two higher than the rest of the homes,” Lofgren says.

2. Find out how much complete insurance coverage will cost

Makes sure you have adequate, up-to-date insurance to coverage. And, before you buy, find out how much adequate insurance in your area will cost — in some instances, it can be unaffordable.

This is especially important because as hurricane season nears, insurance companies can halt new coverage and make changes to existing coverage if a hurricane is approaching landfall.

The best thing to do is review your coverage with your insurance agent. You want to make sure that your policy covers everything you expect it to. Many homeowners have found out the hard way that they didn’t have sufficient coverage after a massive storm hit.

There are insurance policies for different types of dwellings, including manufactured homes and ranches or farm homes.

3. What materials and techniques were used in construction of the house?

Not all homes were designed to battle big storms or protect against major flooding. Before you buy, find out how the home was built and with what type of materials. In areas across Florida and Texas, where hurricanes have devastated communities, building codes have been updated to make sure buildings can better withstand powerful storms.

This is an important consideration when buying a home where natural disasters are likely to strike, says Christian Adams, CEO of Repair Pricer.

“In the countries where I’ve visited hurricane-prone areas, houses are built with breeze block, steel, and concrete. It’s kind of concerning when I see timber-frame homes being built. As a homebuyer I’d ask what are the construction techniques?” Adams says.