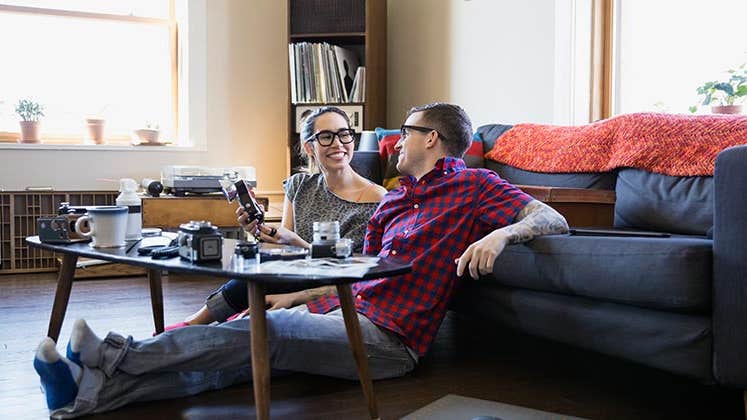 Engaged couples are often bombarded with choices — from color schemes to seating arrangements to cake flavors. One choice, perhaps the most daunting one, isn’t whether to go with beef or fish, though. It’s whether to buy a house before or after marriage.

Marital status is not the most important factor couples should consider when deciding when they should buy a house. Instead, couples should focus on their partner’s financial history, creating a realistic budget and considering worst-case scenarios regarding their relationship.

Molly Phillips married her husband, Graham Phillips, in 2013, but the couple did not purchase a home together until a year later. They took their time in making the decision, considering all the pros and cons of renting versus buying.

“The main reason we chose to buy when we did was thinking about the future and where our money will be,” says Molly Phillips. “When you buy a home, even if you’re incredibly in debt, you’re making payments towards your investment. It would have been incredibly hard to save as much as we would have wanted in addition to paying rent. This way, at least we are putting our money directly towards something that will benefit us in the long run.”

Banks typically underwrite each individual on the application, whether or not the applicants are married.

The Phillipses are now the norm, according to TD Bank’s annual Mortgage Service index. The index found that the majority of homebuyers — 74 percent — purchased their home after they were married. Ray Rodriguez, the regional mortgage sales manager for the greater New York City area at TD Bank, acknowledged that planning a wedding is often an incredibly stressful event for most couples. If you add the process of buying a house on top of that, the pressure can be overwhelming.

“You need to consider whether you are mentally prepared. Buying a home is a stressful process,” says Rodriguez. “I bought my first home when I was engaged. Planning a wedding, working and buying home (all at the same time) adds major stress to your life.”

So, when is the smartest time to buy a home? Before or after marriage? There isn’t one right answer, according to Rodriguez. He emphasizes that every situation is different, but whether or not the two people buying a home together are legally wed doesn’t make a difference when determining the loan amount they would qualify for and the interest rate. Banks typically underwrite each individual on the application, whether or not the applicants are married.

“As a bank we look at each person individually,” says Rodriguez. “There’s no rule on how we are going to underwrite each individual. From a credit score standpoint, it doesn’t matter whether they are married or not.”

RATE SEARCH: Find a mortgage lender you can trust.

Whether or not you have a ring on your finger might not affect your ability to buy a home, but your spouse’s credit score will. A lender typically takes both credit scores into consideration when determining the loan value and interest rate, so it’s important to understand your partner’s financial situation when deciding whether to purchase a home together. If two people are on the loan — and each person has three credit scores — Rodriguez says they use the middle score for each person. Out of those two scores, they use the lower score.

“If the lower of the two middle credit scores is below the standard guideline, that’s going to kill the loan,” says Rodriguez. “Rates are often attached to credit scores, and higher credit scores get a lower interest rate.”

A major hurdle in purchasing a home that many couples, especially younger ones, might experience is one that they might not normally consider: student loan debt.

“One of the things in your credit score is debt, says Rodriguez. “If your spouse has a lot of student loan debt, it could affect their credit score, which could affect your interest rate and how much you can ultimately borrow.”

When Sarah Litz and her husband, Rick Litz, bought their first home together in Elgin, Illinois, less than a year before they were married, they simplified the process by putting the house under Sarah’s name only.

“I have great credit, our commitment to each other was there and we already had a combined bank account and still split the mortgage and the bills,” Sarah Litz says. “We put a down payment on the house and had a small wedding with immediate friends and family only at our new home. I grew up around the wedding industry, and see how much people blow, and didn’t want to do that and not have as large of a down payment on the house.”

Sarah Litz says they are ultimately happy with their decision to buy their home before marriage, and that it helped them get to know each other even better before they said “I do.” After purchasing their first home, the couple upgraded to a bigger house in the same area.

“I wouldn’t go back,” she says. “I mean, I won’t ever be the bride in a beautiful wedding dress, but I may not have as much debt as some who did, depending on their financial situation, that is.”

Be sure to take your time when making this major life decision. If you get divorced and are both on the mortgage, things could get messy. It might not be romantic to think about the real-life consequences of what might happen if things take a turn for the worse while newly engaged, but it’s realistic and necessary. If you get divorced while both on the mortgage, what exactly happens next varies from state to state, according to Rodriguez.

“If you both are on the mortgage and have to make mortgage payments, one person would have to buy the other person out, which would be a large financial obligation,” says Rodriguez. “You have to look at worst-case scenarios. Sometimes it’s uncomfortable.”

Rodriguez recommends sitting down and making a budget, and including everything in addition to the mortgage, like closing costs and down payments. Buying a home takes time, planning and budgeting: TD Bank’s index found that nearly half of survey respondents took more than six months searching for a home.

That’s exactly what Andreana Taormina and her fiance, Peter Caruso, did. The two will wed on New Year’s Eve this year, and they’ve taken their time in creating a housing plan that best fits their financial situation.

“Some factors were about saving our money for the wedding, our financial income, and also obeying my parents’ rules with not moving in together before marriage and saving enough money until we can afford a house,” Taormina says. “My fiancé currently has his own home that he is renting out to somebody. After we are married, the renters will move out right before the wedding and it will be our home.”

RATE SEARCH: Get preapproved for a mortgage today.