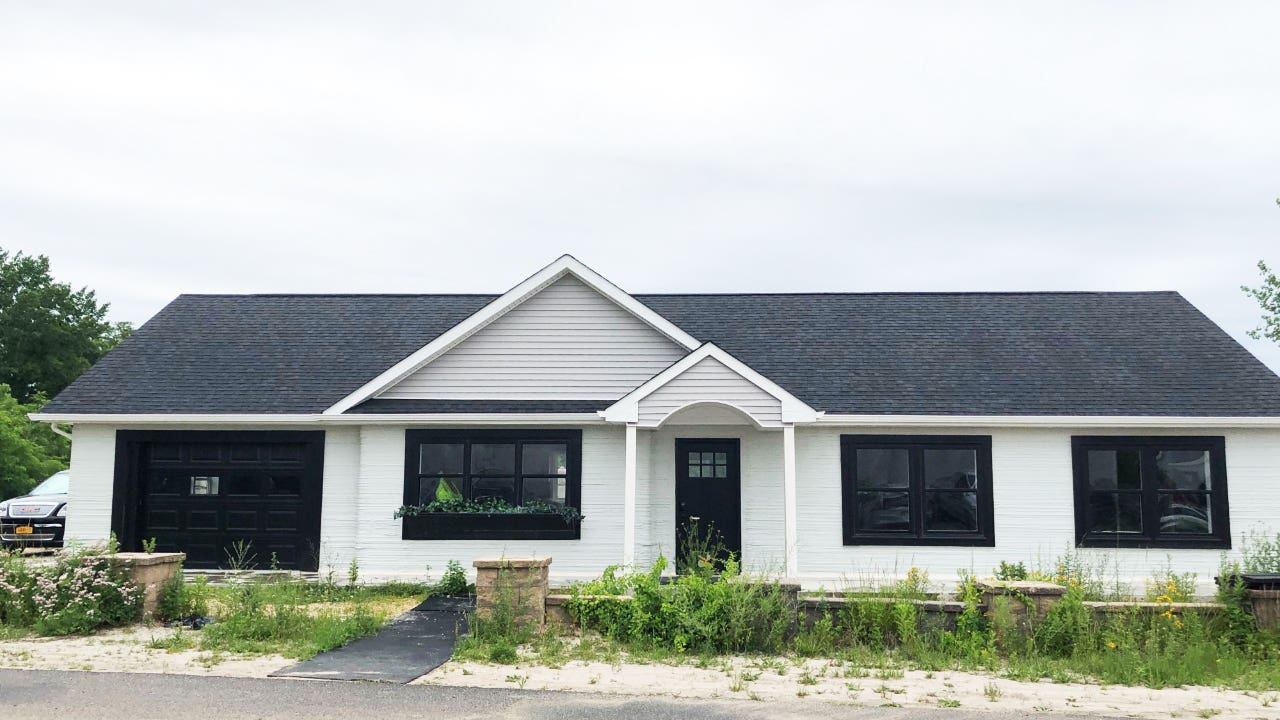 If you didn’t notice your only neighbor was a concrete manufacturing facility, it would be easy to think that 1843 Middle Road in Calverton, New York, was just another new, modern suburban home with some unusual siding.

That’s kind of the point. The house is actually a prototype for residences 3D-printed using concrete. Kirk Andersen, director of operations at SQ4D, the company behind the structure, said it’s meant as a proof of concept to show how livable the futuristic-sounding home actually is.

“This is one of the biggest 3D printed things in the world,” he said. “It’s a 1,900 square foot home, the proof that we can put a couple bedrooms, fit you out with a bathroom and you can decorate it however you want on the inside.”

Concrete construction is already popular in some parts of the country, but in many areas, it’s still seen as novel compared to traditional wood framing.

How does 3-D house printing work?

For the prototype, Andersen said, the foundation was poured traditionally and the roof uses wood support struts, but the main body of the house was printed using a 3D concrete printer.

The design for the house is determined by a computer program, which directs the 3D printing gantries how to move around the building site. Andersen said the floorplan can be redesigned by tweaking the computer code, leading to an almost infinite number of potential layouts.

For now, his company is focused on manufacturing single-story homes, which Andersen said are less architecturally complex than multi-story ones.

The prototype also has most of its utilities like electrical conduits on the exterior of the walls, but future models will have those pieces of infrastructure printed internally.

What’s the outlook for this construction method?

Concrete construction, along with other off-site building methods has some key advantages, especially in the current climate where supply chains are running tight and lumber prices are spiking.

“There’s an overarching theme that builders are looking for alternatives to onsite, stick-built construction,” said Devin Perry, executive director of business improvement programs at the National Association of Home Builders. “You’ve seen an uptick in interest due to labor and material constraints.”

He added that concrete homes are already popular in areas where natural disasters like hurricanes and wildfires make wood-framed houses more costly to maintain, and surging lumber prices are giving alternative building methods a further boost.

“Your upfront cost with material and some of the advanced construction methods exceed the typical wood-based, stick-built construction,” he said, but “the cost of concrete has not kept pace with the recent increase in lumber, so it’s becoming more affordable.”

Plus, Perry added, concrete homes tend to have lower maintenance and energy costs, so there’s downstream savings for homeowners.

He also acknowledged that concrete construction can be more carbon-intensive than traditional wood frame houses, but because of higher energy efficiency, most concrete homes make up that difference after about a decade.

It’s made of concrete. Isn’t that cold?

“You think concrete: cold, because you’re probably in a basement. But there’s millions of people living in concrete homes in Florida and Europe and around the world,” Andersen said.

Although the prototype house in Calverton doesn’t have any insulation, future builds will have insulating foam injected between layers of concrete in the walls. In the photo above, you can see the space in the partially finished walls where the insulation will be installed.

“You can seal concrete many ways. This is concrete, it’s nothing new. I would prefer it over a wood-built home,” Andersen said.

What if I want to remodel later?

This is definitely one complicating factor. Concrete homes are going to be a little more complicated to modify than traditionally-framed ones once construction is completed.

“It’s concrete, nobody’s stopping you, but that’s not where we’re headed,” Andersen said. SQ4D is focused more on constructing affordable starter homes rather than making ones that people will try to remodel significantly over time.

“I’m trying to make something single-story, reasonable size, affordable that you can raise a family in,” he said. “There are affordable housing crises everywhere.”

Concrete houses are durable, but will require maintenance like anything else. Concrete can and will crack, Andersen said, but if those cracks are filled with the correct material, the wall will remain stable for decades to come. The next house his company builds will have a 50-year warranty.

Plus, Andersen said, emergency repairs can be easier on a concrete home in some situations.

“If a flood happens you can power wash this thing out, you’re not replacing drywall,” he said.

Andersen’s company is working on scaling up in New York and expanding to Florida and California. They’ve actually already gone into contract on their first habitable home in Riverhead, New York, where the new owners are expected to move in this summer.

Meanwhile, other companies like Austin-based ICON have already built a community of 3D printed homes in Mexico with more on the way — including a contract with NASA for structures on the Moon.

The technology for 3D printing homes is still being developed, but it is getting a foothold.

“It’s exciting to have more options for homebuilders, and 3D printing can be one of those,” Perry said.

If you’re interested in exploring this method for your own housing needs, it’s worth a quick web search to see what companies are doing this kind of work in your area, and reaching out to see what your options are.