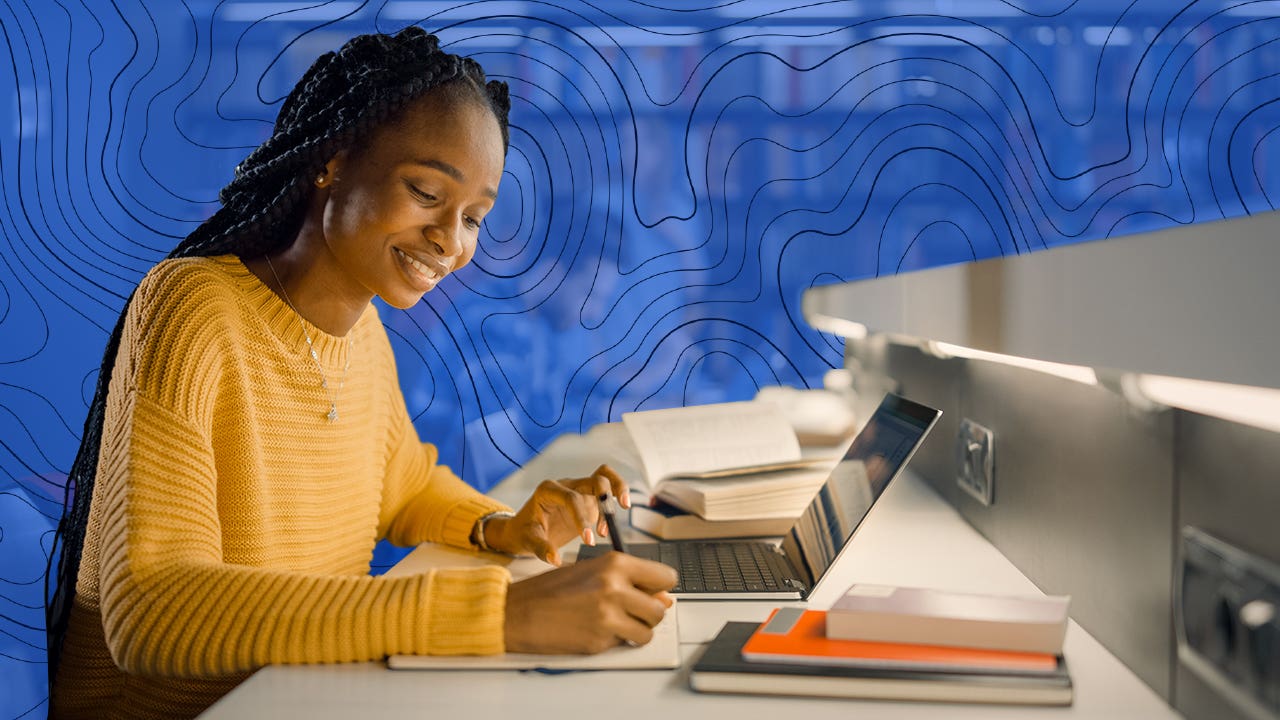 Jeff Ostrowski
Edited By
Chelsea Wing
Edited by
Chelsea Wing
Student loans editor
Chelsea has been with Bankrate since early 2020. She is invested in helping students navigate the high costs of college and breaking down the complexities of student loans.

An engineering degree of any kind offers a clear path to steady employment and a solid income. But one engineering specialty stands out in Bankrate’s latest ranking of the most valuable degrees.

Architectural engineering — a discipline focused on the science of buildings — ranks atop our latest look at 159 college degrees. At the opposite end of the spectrum is visual and performing arts.

For this study, Bankrate looked at the median incomes and unemployment rates of American workers based on the subject of their bachelor’s degrees. The higher the income level and the lower the unemployment rate, the better.

We also factored in how many people with each major went on to earn a higher degree, such as a master’s degree or doctorate. Our index downgraded majors where high percentages of bachelor’s degree holders took on the added time and expense associated with advanced degrees.

The full details of our methodology are below, as well as a breakdown of the most and least valuable college majors.

Architectural engineering rose to No. 1 based on salaries that grads typically earn and the ease of landing a job, along with the comparatively low percentage of grads who went on to earn advanced degrees. The median income for workers who said they majored in architectural engineering was $90,000, and just 1.3 percent of degree holders were unemployed.

The undergraduate curriculum is a demanding one. For instance, architectural engineering majors at Penn State and the University of Texas take a variety of courses in building technologies and materials science. Passing differential equations is a requirement.

“Architectural engineering is all about building sciences,” Miller says. “It merges the structural foundations part of civil engineering with mechanical and electrical engineering, specifically the parts that relate to building.”

The degree nearly guarantees a job. Architectural engineering majors typically line up full-time gigs well before the end of their senior years.

“Engineers are in demand,” Miller says. “If you want to hire one of our students, if you’re not interviewing them now, chances are you’re not going to be able to hire them when they graduate in April.”

Construction services came in as the second-most valuable major, followed by computer engineering. The top 25 majors had a median unemployment rate of just 2.3 percent and median incomes of $93,000.

By comparison, the median income for all Americans holding at least a bachelor’s degree in 2019 was $54,000, and the jobless rate was 2.7 percent, according to the data Bankrate analyzed.

Electrical engineering came in as the highest-paying degree. Americans with electrical engineering degrees reported a median income of $107,000. However, our index downgraded the major because it has a slightly higher unemployment rate (2.3 percent) and a high percentage of graduates who went on to earn advanced degrees (46 percent).

The financial stage isn’t set quite as neatly for those with degrees in the arts. Art-related majors are clustered in the bottom spots of our ranking.

Visual and performing arts ranked as the least-valuable major, largely because the median income for degree holders was just $35,500. In another downside, 3.6 percent of degree holders were unemployed.

Miscellaneous fine arts majors and drama and theater arts majors also ranked at the bottom. These majors had unemployment rates of 4.5 percent or higher and median incomes below $45,000. 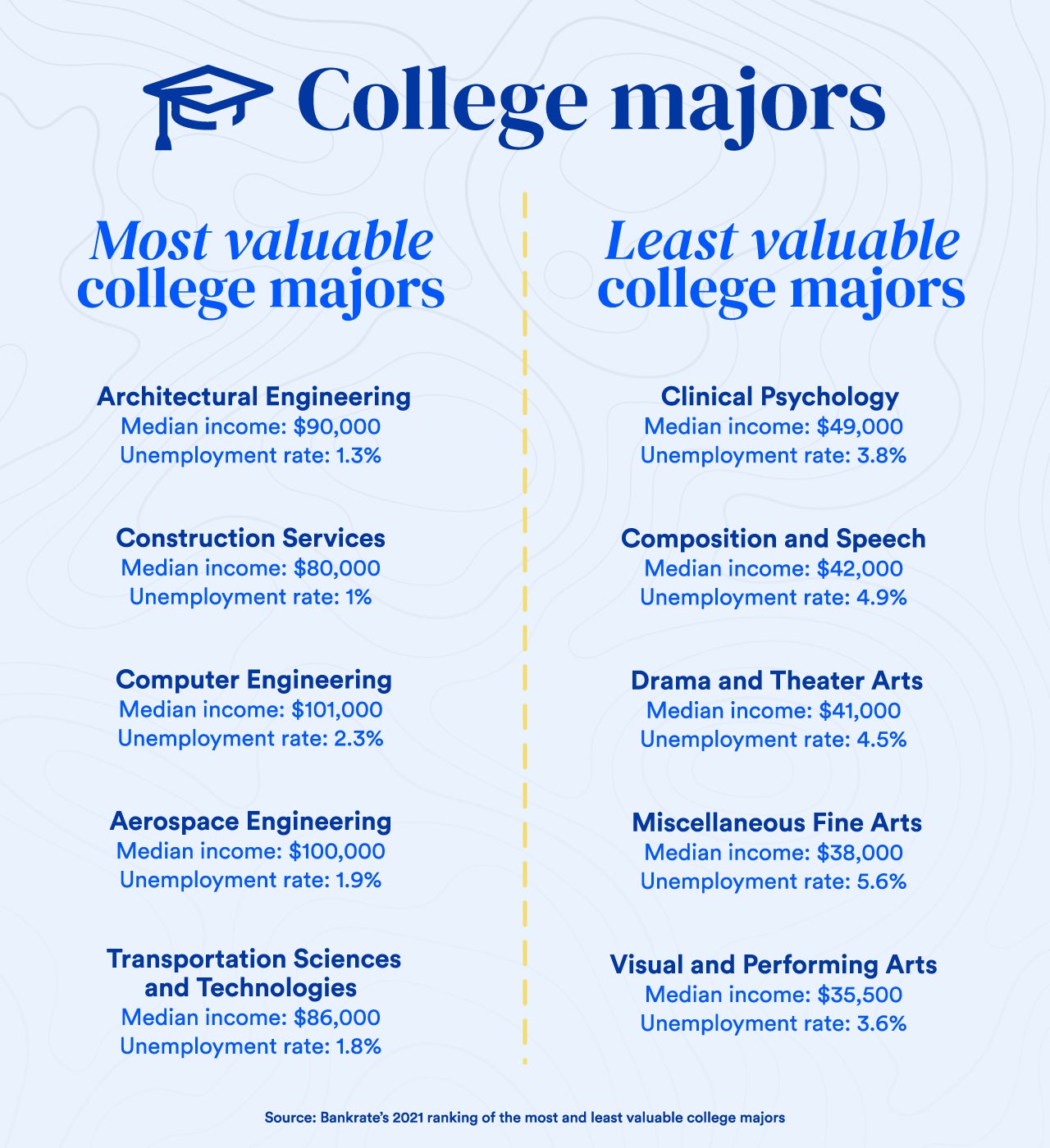 Of course, students shouldn’t pick a college major solely based on future income, unemployment rate and the amount of schooling required. STEM degrees aren’t for everyone; students will be at their most successful when pursuing a field that’s interesting to them. There’s a psychic paycheck for going into a low-paying field such as social work.

Our study also didn’t adjust for such factors as the selectivity of the colleges workers attended or how much they paid for their degrees.

Compared with American workers who didn’t graduate from college, those with bachelor’s degrees earn significantly more over the course of their careers, according to research by economists at the Federal Reserve Bank of New York. In other words, earning a college degree pays off in the long run — even after years of soaring inflation.

But not all college degrees are created equal. Earning an engineering degree while paying in-state tuition is almost certainly a good investment. Paying for a fine arts degree at a private school is a tougher call.

Saving money during and after college

“Consider community college for the first couple of years before transferring to a university for the final years of the program,” McBride says. “Look for scholarships, grants and work-study programs — all of which could defray the out-of-pocket costs of a degree. And calibrate the cost of the school with your earning potential at the other end.”

Don’t overlook living expenses. Students can save money by shopping around for an apartment or taking on roommates rather than living alone.

Even after scholarships and other free money have been accounted for, taking out student loans has become the norm for Americans pursuing bachelor’s degrees. Sixty-two percent of college seniors who graduated from public and private nonprofit colleges in 2019 had student loan debt, according to The Institute for College Access and Success. These borrowers owed an average of $28,950.

To avoid getting bogged down in student debt, make it a priority to repay loans from banks and private lenders before those from the federal government. Unlike private loans, federal loans have the benefit of low interest rates, income-based repayment plans and other borrower protections.

“I’m going to say something that’s very unconventional: I don’t think there’s any rush to pay down your federal loans. Make the minimum payment and shove the extra money in your 401(k) instead,” McBride says. “Every dollar you put away in 20s could be $15 by the time you retire.”

To determine the most valuable majors, Bankrate looked at the most recent data available from the U.S. Census Bureau’s American Community Survey, based on interviews of more than 2 million Americans. Bankrate extracted the 2019 data from IPUMS USA, the clearinghouse of census data hosted by the University of Minnesota.

Bankrate analyzed bachelor’s degree holders who were in the labor force and either employed or seeking work. We looked at the 159 majors reported by at least 250 people in the 2019 ACS. We also examined how many college graduates went on to earn advanced degrees, including master’s degrees or doctorates. To construct our ranking, Bankrate examined three factors (weightings in parentheses): median income (70 percent), unemployment rate (20 percent) and the percentage of people with an advanced degree (10 percent).

Read more From Jeff
Jeff Ostrowski covers mortgages and the housing market. Before joining Bankrate in 2020, he wrote about real estate and the economy for the Palm Beach Post and the South Florida Business Journal.
Edited by
Chelsea Wing
Student loans editor