Dentistry is a lucrative career, with dentists making an average of $180,830 a year. However, you likely won’t earn the highest-level dentistry pay right out of school. In fact, there are a few different factors that affect how much dentists make a year.

If you’re thinking about a career in this high-paying field, here’s what to know about the starting salaries for dentists, dentist incomes for various specialties and whether the pay is worth dental school debt.

The latest data from the Bureau of Labor Statistics (BLS) shows that the average dentist salary is $180,830. Dentists working at private practices can earn even more; the American Dental Association (ADA) found that the average net income in 2020 was $170,164 for general dentists and $323,776 for specialists.

Like other professionals who are early in their career, an entry-level general dentist might earn a lower salary than a more experienced one. According to ZipRecruiter, the national average starting salary for dentists is $58,732, which is significantly less than the national average across the profession. However, this can vary by position, location and employer.

What determines a dentist salary?

The typical income you can expect in this line of work depends on a handful of variables. Below are a few factors that can affect dentistry pay.

The city and state where you practice has a significant effect on how much you’ll earn as a dentist. For example, according to state and area data from the BLS, the average general dentist salary in Illinois is $198,480, while Wyoming- and Vermont-based dentists earn $133,750 and $254,190, respectively.

Even wages between different areas in the same state can vary considerably. For example, in California, general dentists in the San Francisco metropolitan area earn an average wage of $177,420 per year, while Los Angeles dentists earn an average of $137,020.

Dental specialties require two to six years of additional residency training. The ADA recognizes 12 dental specialties, all of which have higher salary potential than a career as a general dentist.

A few examples of top-paying dental specialties and their mean annual wages, according to the BLS, are:

Specialists stand to earn among the top dentist incomes, but this requires more years of education and potentially more dental loan debt to complete that training in an accredited program.

The number of years you’ve practiced as a licensed dentist can also influence your dentistry pay. With more experience, you’ll qualify for more competitive salaries, and you may be able to accept more patients into your practice.

The industry you work for also plays a role in your income. For example, the average income for dentists in offices of dentists is $183,340, according to BLS data, while dentists in general medical and surgical hospitals earn an average of $142,450.

Dentists who work in the private sector, whether general practice or specialty, typically earn more than those in the public sector.

Do dentists get paid well?

Dentists are well paid, but if you’re not picky about your career path in health care, there are other high-paying opportunities. Here are some examples of other medical professionals that make more on average than dentists:

That’s not to say that becoming a dentist isn’t worth it, especially if you’re passionate about the field and your career path will lead to an above-average salary.

Is becoming a dentist worth it?

The earning potential from a dentistry career is competitive, but you’ll also need to factor in the costs of your education if you’re considering whether this career path is worth it. In addition to earning an undergraduate degree, you’ll need to complete an accredited dental school program and advanced training if you want to specialize.

Dental school graduates from the class of 2020 had an average student loan debt of $304,824, according to data from the American Dental Association. This debt total accounts for unpaid undergraduate loans and loans during dental school.

Before committing to taking on the costs of becoming a dentist, consider whether it’s the best profession for you. Here are some tips to help you decide:

SHARE:
Written by Jennifer Calonia Contributing writer
Read more from Jennifer
Jennifer Calonia is an L.A.-based writer and editor. She's covered topics like debt, saving money and credit cards. You can find her work on Business Insider, Forbes and more.
Edited by
Chelsea Wing
Edited by Chelsea Wing Student loans editor
Chelsea has been with Bankrate since early 2020. She is invested in helping students navigate the high costs of college and breaking down the complexities of student loans.
Chelsea Wing
Student loans editor 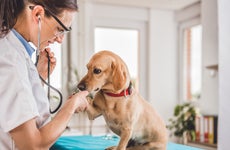 The average veterinarian salary: How much do vets make? 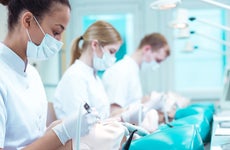 Is dental school worth it? 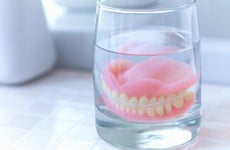 How much do dentures cost? 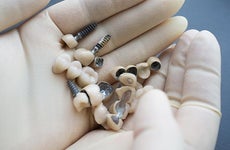 How much do dental implants cost?