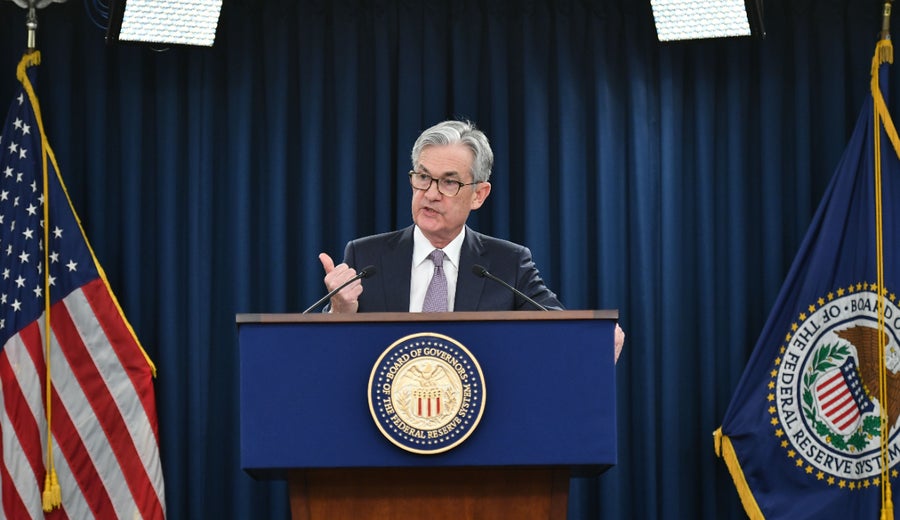 The Federal Reserve left interest rates alone and deferred making any major changes to policy, staying on the sidelines during an intense period of Washington drama as the winner of the U.S. presidential election has yet to be determined.

The Fed’s policymaking arm decided to keep its overnight lending rate pegged at its lowest levels ever, in a target range of 0-0.25 percent. For consumers, it means more downward pressure on savings account and certificate of deposit (CD) yields, while borrowing rates for auto loans, credit cards and home equity lines of credit (HELOC) are likely to edge lower, if at all.

“Economic activity and employment have continued to recover but remain well below their levels at the beginning of the year,” Fed officials wrote in their post-meeting statement released on Thursday. “The Federal Reserve is committed to using its full range of tools to support the U.S. economy in this challenging time, thereby promoting its maximum employment and price stability goals.”

The move was universally expected, even as Fed officials underscore concerns about the U.S. economy requiring more stimulus if it’s going to have a shot at fully rebounding from the worst downturn since the Great Depression. With virus cases surging again across the U.S., reaching their highest levels since the global health crisis first began in March, a second wave of infections is also posing a significant threat to momentum.

“The Fed is perfectly content to fly under the radar this week,” says Greg McBride, CFA, Bankrate chief financial analyst. “The risks to the economic recovery have increased since the Fed last met in September, with rising coronavirus cases, slower job growth, a lack of new stimulus for consumers and small businesses, and now an unresolved presidential election. The Fed has done what they can do at this point, despite saying they have a range of tools still available.”

Experts foresaw Federal Reserve Chairman Jerome Powell & Co. laying low even before Election Day began, a voting process that was expected to take longer than in years past amid the unprecedented coronavirus pandemic that’s sent demand for absentee and mail-in ballots soaring.

Former Vice President Joe Biden’s path to the White House looks much more certain than President Donald Trump’s at this point, but the results are still too soon to call with delays in vote counts from key swing states including Nevada, Arizona, Georgia and Pennsylvania.

Even if Biden is chosen as president, Republicans look fairly likely to maintain control of the Senate, which might dampen the prospect of a bigger fiscal care package comparable to the CARES Act passed in March.

When asked about the results of the election, Powell reiterated that officials don’t make interest rate decisions based on any one outcome.

The election “comes up now and again but it is not at all a central focus of the meeting,” Powell said. “It is a good time to step back and let the institutions of our democracy do their jobs.”

Treasury Secretary Steven Mnuchin and House Speaker Nancy Pelosi in mid-October had made their most concerted effort to bridge the gap between both Republican and Democrats in months, but those talks broke down over lingering policy differences.

Stimulus plans for the economy

Powell has underscored that Americans might be most helped through fiscal aid, rather than the Fed’s traditionally blunt instrument. Still, if the Fed wants to stimulate the economy and provide households with more support, experts say it can adjust the composition of its bond-buying program to be in a position that stimulates the economy, rather than stabilize market functioning.

Powell mentioned that officials discussed how and when to implement such a plan, which would look more similar to the post-financial crisis “quantitative easing” program. “We may reach a view that we need to do more on that front,” Powell said, but its current pace of buying “at least” $120 billion is still a “big” program. Experts say the Fed might be better suited to wait until yields actually need downward pressure, with the 10-year Treasury rate already hovering at a historically low level of around 0.77 percent as of Thursday’s announcement.

“At this stage, there’s not much they need to do or want to do,” says Tom Garretson, CFA, senior portfolio strategist at RBC Wealth Management. “As long as they at least communicate to the market that that tool is in their back pocket, for now, that’s good enough.”

The Fed might also be asked to extend its suite of 13 different credit programs designed to funnel credit to households and companies as well as stabilize market functioning, which are set to expire at the end of this year. Powell indicated during Thursday’s post-meeting press conference that officials are “just now turning to that discussion,” but any such move would have to be made in conjunction with the Treasury Department. Those programs have already been extended once, with the original Sept. 30 expiration date pushed back to Dec. 31.

The Fed’s programs have had little take up so far, though they’ve provided a significant backstop to credit markets. Experts say the Fed might be able to adjust terms of those programs to be more flexible and lenient with risk taking, allowing for more participation. That would provide the economy with more support, though it would have to be approved by Mnuchin.

The last major economic release showed gross domestic product (GDP) — the broadest measure of the financial system’s strength — rebounding at record strength, though it wasn’t enough to offset declines in the first three months of 2020. The U.S. economy is still about 3.5 percent smaller than it was before the pandemic, and officials aren’t expecting it to get fully back on track until at least 2021, according to forecasts last updated in September.

The Labor Department’s widely watched jobs report for October will be released less than a day after officials’ interest rate announcement. Job gains are expected to slow to 590,000 in the month, according to a Bloomberg survey of economists, and unemployment is expected to edge down slightly to 7.6 percent from 7.9 percent.

One of the biggest concerns is that the Fed might be running low on ammunition to help prod the economy back to life. Powell stressed that the Fed isn’t out of ammo, and there is still more the Fed could technically do. But those steps won’t address the overall cause of the volatility and uncertainty, nor will it replace lost demand that might be holding firms back from hiring more workers.

“The credit channels remain open, and those are all very important, but at the end of the day, all that can do is encourage lending and spending,” says Steven Friedman, senior macroeconomist at MacKay Shields. “While they can adjust their purchase program as necessary to support the recovery, it’s really much less effective than fiscal policy at this point.”

Americans have likely already been taking prudent financial steps, almost eight months into the coronavirus crisis. Those include cutting back on expenses as much as possible and ramping up their emergency savings — a cash cushion that experts typically recommend to account for three to six months of individuals’ expenses.

At this point, however, Congressional actions are going to be the biggest game changer for consumers. Fiscal policymakers’ most powerful steps so far to help Americans get through the pandemic have been direct payments of $1,200 (or more) and a supplemental $600 boost to weekly unemployment checks. That provision, however, expired in July, while a separate $300 temporary unemployment insurance (UI) enhancement through an executive order from President Donald Trump has mostly already expired across the U.S.

At the same time, about nine million Americans still have yet to claim their stimulus payments, according to the IRS. If you’ve received notice about having an unclaimed check or are still waiting for your money to arrive, be sure to request it before the final deadline passes on Nov. 21.

Consumers will benefit from shopping around for competitive rates, with interest rates likely holding at historic lows for years to come. Meanwhile, homeowners looking to refinance could shave hundreds of dollars off of their monthly payments, freeing up more change to use for other purposes. Those rates have consistently fallen each week, thanks in part to the Fed’s efforts to keep interest rates at historic lows through its massive bond-buying programs. If consumers refinance, they should consider allocating that extra money to their savings fund.

“Mortgage rates are still at record low levels, so the window of opportunity for homeowners to refinance remains wide open,” McBride says. “This can generate hundreds of dollars of savings each month and tens of thousands of dollars in savings over the life of the loan.”

Americans facing hardship or job loss should also reach out to any lenders or firms they regularly pay a bill to, to see if they can work out some sort of forbearance program. Experts say it’s always worth a shot to ask.