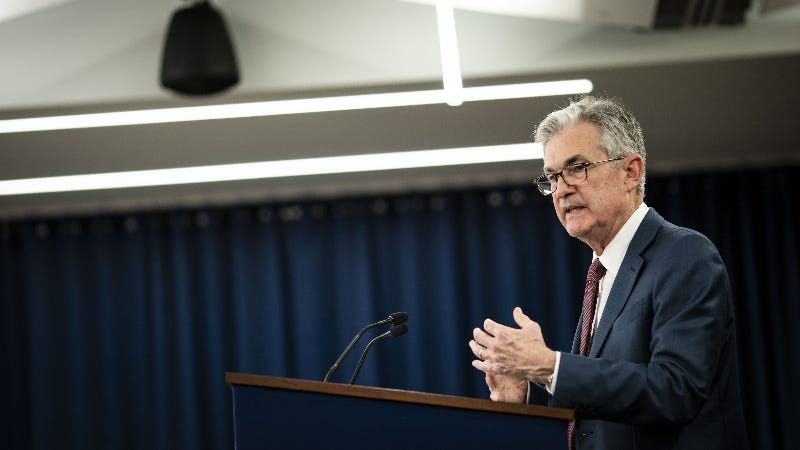 The Federal Reserve left borrowing costs unchanged following its final meeting of the year and signaled that it expects to hold rates steady in 2020, suggesting it’s comfortable with waiting to see how the U.S. economy evolves after three straight reductions.

Officials on the U.S. central bank voted Wednesday to hold the federal funds rate in its target range of 1.5 percent and 1.75 percent. The move comes after policymakers adjusted rates at three consecutive meetings — in July, September and October.

Policymakers at the Fed have been grappling with how to cushion the economy from a hot-and-cold U.S.-China trade war, as well as a decelerating global and domestic economy. Even though the economy hasn’t shown any signs of grinding to a halt, policymakers wanted to be proactive by providing a boost.

“The current stance of monetary policy is appropriate to support sustained expansion of economic activity, strong labor market conditions, and inflation near the Committee’s symmetric 2 percent objective,” the Federal Open Market Committee (FOMC) said in its post-meeting statement, released at 2 p.m. in Washington.

Savers can rejoice the Fed’s decision for the first time in five months. Returns on certificates of deposit (CDs) and savings accounts have plunged this year in response to the Fed’s reductions. With the Fed now on hold, yields likely won’t fall much further — meaning savers can catch their breath.

Meanwhile, borrowers are still in a good place. The federal funds rate is now 75 basis points (or 0.75 percentage points) lower than it was a year ago.

“The Fed says the current level of interest rates is ‘appropriate’ to support the economy,” says Greg McBride, CFA, Bankrate chief financial analyst. “Translation: the Fed is on the sidelines and expects to be there for much or all of 2020.”

After raising rates nine times throughout the current expansion and four times in 2018, the Fed decided to be “patient” with future adjustments in January. That stance then evolved into cutting rates, after Fed officials expected that the economy would need a bit of a boost to fend off risks.

The Fed’s three cuts appear to have already provided some medicine. U.S. employers in November added 266,000 new positions to their payrolls, beating all forecasts. The unemployment rate also dipped to 3.5 percent, a 50-year low, while wages rose 3.1 percent from a year ago.

Economic growth in the third quarter also rose by more than forecast, suggesting momentum is still on firm-footing even amid some natural slowing.

Outside of the data, the picture is also getting brighter. Though President Donald Trump suggested that he wasn’t in a hurry to reach a “phase one” trade deal with China, the two powers announced that they were laying the groundwork for a delay on the next round of tariffs set to go into effect on Dec. 15.

All of these conditions led policymakers to believe that interest rates were in an appropriate place — and would likely continue to be that way, as long as the picture didn’t show any fresh signs of weakness that causes a “material reassessment” of its outlook.

Fed officials echoed that message with December’s announcement, while also further elaborating on what could constitute as a material change.

“The Committee will continue to monitor the implications of incoming information for the economic outlook, including global developments and muted inflation pressures, as it assesses the appropriate path of the target range for the federal funds rate,” the FOMC said in its post-meeting statement.

Powell suggested during the Fed’s post-meeting press conference that, right now, inflation is on his mind. In questioning from journalists, the chief central banker said he would like to see inflation rise “consistently and persistently” past its target of 2 percent before hiking again.

“That’s something we haven’t heard before,” Kantesaria says. “It all points to the long-term concerns that the U.S. could be facing a situation similar to Japan or Europe, where you have stagflation and very low GDP growth.”

It might also be a method of maintaining credibility, says Vincent Reinhart, chief economist and macro strategist at Mellon who spent 24 years at the Fed. The U.S. central bank officially defined its inflation target as 2 percent in 2011, and for most of the time since, it hasn’t sustainably passed that level.

The public also doesn’t expect inflation to run away in the future, according to gauges that measure inflation expectations.

“That gives them some scope to run inflation above goal for awhile,” Reinhart says. “They’ve been below their goal for a while.”

Fed forecasts show no moves in 2020

Among the few changes, Fed officials forecasted a long-run unemployment rate of 4.1 percent, down from 4.2 percent in September. That suggests the Fed’s estimates of full employment were lower than initially forecast, a notable shift.

The FOMC repeated in its post-meeting statement that job gains have been “solid” and the labor market “remains strong.”

In the Fed’s dot plot, 13 out of 17 officials penciled in no rate moves for 2020. It was surprising that so many were in agreement, Reinhart says, especially since there were dissents at the past four meetings.

“It means they talked themselves into being convinced that the fed funds rate is in the right place,” Reinhart says. “This is a committee that is trying to keep a low profile in 2020.”

The December meeting marked the first time since May that all officials agreed on the decision.

But the years ahead are where it gets tricky. Officials had disparate rate forecasts for 2021 and 2022. Five officials wanted no rate changes in 2021, while four wanted one hike, five wanted two hikes, and three wanted three hikes.

It’s likely too soon to read into that, though, McBride says.

“This time last year, the Fed was talking about raising interest rates two or three more times in 2019,” McBride says. “We all know how that turned out.”

Officials’ long-run estimate for the federal funds rate — often referred to as the neutral rate of interest — was 2.5 percent, unchanged from September’s projections.

The Fed is going to have a lot to contend with heading into 2020 — and so will borrowers and savers.

Though the picture is getting brighter, the outlook is still uncertain, with trade agreements being unfinalized. Meanwhile, the presidential election might not directly impact Fed policy, but it could be one of the reasons why the Fed wants to stay on the sidelines next year.

This meeting’s dot plot “is a political document, more so than you would normally expect,” Reinhart says. The dots show that the Fed “has to tighten at some point; they see themselves doing it after the election.”

Savers might not necessarily be celebrating, but they can still find plenty of accounts on the market offering rates 20 times higher than the national average. That, coupled with low inflation, means returns are still coming at a healthy rate.

“No further rate cuts mean the dust will settle and yields on savings accounts, money markets, and CDs will stabilize after retreating since mid-year,” McBride says. “Mortgage rates are a full percentage point lower than this time last year, a boon to homebuyers and refinancers alike. Being able to trim $150 per month out of the household budget by refinancing to a lower rate could be the pay raise homeowners didn’t otherwise get.”

But it’s still not time to sit back and get comfortable. The Fed may say it’s on hold right now, but conditions could change at any time. If the Fed cuts again, it could signal that the economy might not be faring so well. If the Fed hikes, however, debtors who got a good handle on their balances will be thankful.

“It’s a committee that’s got guardrails,” Reinhart says. “With the next policy action, the bar is really high for a hike. It’s still high for a cut, but not as high.”