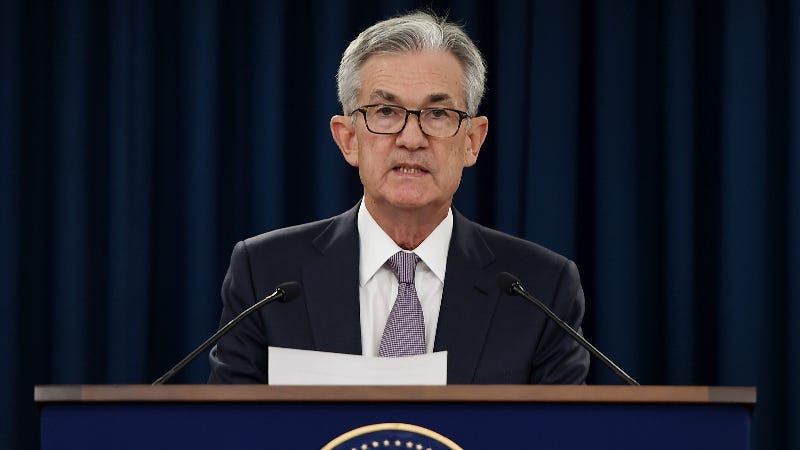 The Federal Open Market Committee (FOMC) lowered its target range for the federal funds rate to 1-1.25 percent. It’s the first emergency move since October 2008, when the U.S. economy was in the midst of its worst crisis since the Great Depression.

Fed Chairman Jerome Powell told journalists in a press conference that risks to the U.S. outlook have changed “materially” and the coronavirus will impact activity “for some time,” even as he cautioned that the U.S. economy’s fundamentals remain strong.

“The outbreak has disrupted economic activity in many countries and prompted significant movements in financial markets,” Powell said.

The rate cut, a unanimous decision, comes less than two weeks before the Fed’s next regularly scheduled meeting, a two-day session that concludes on March 18. Market participants think the Fed will cut rates again at that gathering, according to CME Group’s FedWatch tool.

“The fundamentals of the U.S. economy remain strong. However, the coronavirus poses evolving risks to economic activity,” the FOMC said in a statement, released Tuesday in Washington. “The Committee is closely monitoring developments and their implications for the economic outlook and will use its tools and act as appropriate to support the economy.”

The Fed’s reduction comes on the heel of unprecedented pressure from the Oval Office, with President Donald Trump urging officials to reduce rates in light of the coronavirus fallout as he touts the record-long expansion during his reelection bid.

Nearly an hour after the Fed made its emergency move, the chief executive tweeted that the Fed should enact more stimulus.

The Federal Reserve is cutting but must further ease and, most importantly, come into line with other countries/competitors. We are not playing on a level field. Not fair to USA. It is finally time for the Federal Reserve to LEAD. More easing and cutting!

The cuts come days after investors experienced their worst week for stocks since the financial crisis, with major indices plunging more than 10 percent on fears that the deadly coronavirus was nearing pandemic levels. Cases of the virus, which has already infected more than 90,000 worldwide, have swiftly spread to areas outside of the Chinese city where it originated. Italy, Iran and South Korea are dealing with their own major outbreaks, while more infections are popping up around the U.S.

Officials seeking to contain the spread of the virus have issued quarantines in major cities, including the epicenter of Wuhan, China, with a population of more than 11 million. Companies such as Honda and Nissan have been severed from their major supply chains, amid shuttered factories. Other firms, including Apple, have ceased operations in China entirely to curb the spread of the virus.

Stocks edged higher after the announcement, while the 10-year Treasury yield slipped closer to 1 percent.

“One of the things that’s been different about this Federal Reserve under Chair Powell is they’re far more sensitive and reactive to financial market sentiment than being driven by what’s happening in the underlying economy,” Skancke says. “A decline of that magnitude can and will have a negative effect on the economy.”

But the Fed isn’t out of the woods just yet. Much of the economic impact from the coronavirus is supply-side driven, and if factories are shuttered, it won’t matter if interest rates are lower. Fed reductions also won’t contain the spread of the virus, but they can help boost sentiment.

“The Fed’s decision to cut its rate target by 50 basis points is not surprising,” says George Selgin, senior fellow and director of the Center for Monetary and Financial Alternatives at the Cato Institute. “For some days, markets have been expecting a deeper cut than that. Consequently, had the Fed not announced a cut the decision would have amounted to disappointing news, which would have fueled further panic.”

When it comes to addressing a supply shock, Powell said it will require efforts from multiple entities, including Congress and health care professionals. But rate cuts will provide a boost to the U.S. economy and mainly help avoid additional tightening in financial markets that could ultimately restrain growth, he said.

Rate cuts “will not reduce the rate of infection or fix a broken supply chain. We don’t believe we have all the answers,” Powell said.

They will, however, reduce borrowing costs for U.S. companies who are trying to find alternate sources of intermediate supply, Skancke says.

“The Fed cutting interest rates is not going to open up factories and supply lines coming out of China. It’s not going to produce a car or going to put people back on airplanes,” he says. “In that sense, there is some incremental help and support for the producers and suppliers of goods and servicers in the U.S. as they wait for the disruptions of containment policy to work.”

Breaking down the Fed’s cut

The Fed might not be the last to institute emergency action. The reduction comes merely hours after the Group of Seven — an international economic bloc of industrialized countries — reported that they were willing to act as necessary to support countries struggling to contain the coronavirus fallout. The International Monetary Fund on Monday also pledged to help as necessary, offering economic remedies such as emergency financing and policy advice.

Investors betting on future Fed moves might not be so far from the curve. Goldman Sachs on Monday reported that they were expecting 100 basis points — or a full percentage point — worth of cuts out of the Fed. Officials’ statement that the U.S. central bank will “act as appropriate” to keep shoring up economic growth suggests a willingness to continue cutting.

“What matters most isn’t what the Fed has done today, but what actions it signals for the future,” Selgin says. “A strong commitment by Fed officials to do whatever is needed to accommodate dollar demand, and thereby prevent any persistent decline in overall spending, will ultimately help allay panic more than any single rate cut can.”

An emergency cut is “a very big deal,” Skancke says. Not only is it a 50 basis point reduction, much larger than other cuts from this current Fed, but it’s also made between meetings, suggesting that officials didn’t think they could wait until their regularly scheduled March gathering. But it might be more of a gesture designed to soothe jittery markets, Skancke says.

“I don’t interpret that they are all that much concerned about the trajectory of the U.S. economy,” Skancke says. “They’re concerned that financial markets understand and accept and see that the Fed is engaged and paying attention and ready to take action when action is required.”

The Fed’s latest move comes with clear winners and losers. Borrowers are the direct beneficiaries. When the Fed cuts rates, it makes loans for autos and credit cards cheaper. At the same time, the 10-year Treasury yield has been trading at its lowest ever, pushing down mortgage rates to near record lows, even though they’re not typically linked to Fed moves.

Reductions, however, are a wake-up call for savers, who have already been grappling with interest rates at historic lows. Individuals living on fixed income, who are sensitive to rate moves, may also feel strapped for cash.

Investors may want to hum a cautious tone. While it’s important to keep an eye on the long-haul, it will take more than monetary policy action to calm market choppiness. Congress may be strapped to institute a fiscal policy designed to aid the health response, says Mark Hamrick, Bankrate’s senior economic analyst.

But when the Fed issues an emergency rate cut, it shows that the U.S. economy might be facing some trouble. Now’s the time to prepare an emergency savings fund, so you have a financial cushion in case the broader financial system were to turn south quickly.

“While the statement from the FOMC says the fundamentals of the economy remain strong, central bankers are obviously concerned about developments yet to possibly unfold,” Hamrick says. “Lower rates provide an opportunity for lower cost borrowing including for mortgages which support refinancing and prospective homebuyers. For savers, it will remain important to shop around for the best rates.”