As more kids head back to class, a new survey shows some families saw silver linings to virtual learning during the COVID-19 pandemic, including saving money as a result of having their kids study at home.

But the survey also highlights stark differences in views based on the gender of the parent, the age of the child and the learning model. In general, mothers and parents of teens and hybrid learners hold less rosy views of the educational, financial and mental health effects of remote learning.

One parent, Kristina Rowland, a regional vice-president for Primerica Financial Services who lives in Centennial, Colorado, and who is a former educator, said she and her husband Chris decided to homeschool their three children—Patrick, 13, Gabriel, 11, and Aurora, 7, starting in March 2020.

“Our experience has been amazing,” Rowland said, adding that one of her kids who was being bullied and struggling in school “loves learning again” and the whole family gets to travel together.

The children have had space to pursue special interests like robotics, engineering and the chemistry of cooking. The parents have supplemented lessons with trips, including one to San Antonio, Texas, to see the Alamo while studying American history.

“None of us wants to go back to the way things were before,” she said.

Nearly eight in 10 parents with kids under 18 (79 percent) said their children experienced remote learning at least some of the time over the past year. Almost half of this group (46 percent) said their kids studied fully remotely while 34 percent said theirs engaged in a mix of remote and in-person classes, a Bankrate.com survey of over 2,500 U.S. adults conducted online by YouGov in February found. (See survey methodology.)

“I thought a lot more parents would be itching to get their kids back into the classroom full-time,” said Ted Rossman, senior industry analyst at Bankrate.com. He added: “It’s hard to say whether parents really liked remote learning or if they merely felt it was the best option during a difficult situation.”

But we should learn more as mass COVID-19 vaccination and easing of government restrictions lead many schools to bring teachers and students back. Judging by Bankrate data, Rossman said: “Some parents will be uncomfortable with that, while others will be thrilled.”

Some parents said virtual learning has helped their households save money on school supplies and has had a generally positive impact on family finances.

In fact, 38 percent of U.S. adults with children under age 18 who participated in at least some virtual learning since March 2020 said the situation had a positive impact on their overall money situation and just 18 percent said it has had a negative impact on family finances, the Bankrate survey found.

No matter whether parents perceive a good or bad financial impact, remote learning definitely shifted household spending. In every category, some families said they spent more due to virtual learning while others reported they spent less.

The biggest spending increases found in the survey were in these two categories:

Many families had to reconfigure their homes to create quiet spaces for both children learning online and parents working remotely, said Colin Exelby, CFP and financial blogger whose children switched to full-time virtual learning last fall (his first grader recently started a hybrid model). In some cases, that meant shelling out a significant amount of cash for chairs, desks, dividers, laptops and other items to make the arrangement work.

“Last summer, IKEA was sold out of desks for children … and IKEA is not a small place,” he said.

Those extra expenditures were balanced by cutbacks in spending on school clothes and accessories, with more than one-third (34 percent) of parents saying they spent less in that category. That may have been a big help for many families since school clothes can be a costly item in the family budget, Exelby said.

Sam Zelinka, a personal finance blogger and parent of virtual learners who tracked family expenses through the pandemic, said his family saved a lot by not using daycare for their then-four-year-old for six months. But they spent a lot more in other categories not related to virtual learning (like home improvement and restaurants). They didn’t spend anything on school clothes but did buy their middle child special “Zoom pajamas.”

“In the end, it turned out to be a wash in terms of spending,” Zelinka said.

But virtual education didn’t just change family spending patterns: it also affected many parents’ ability to earn a living. The most common reasons the survey found for financial hardships reported by parents of remote learners were:

“Virtual learning has had a broad effect on parental employment,” Rowland said, adding that the negative impact has worsened as more parents go back to working in person.

Nearly one in four (23 percent) female parents reported that remote learning had a negative impact on family finances while a little more than one in 10 (13 percent) male parents said the same. Data from the Pew Research Center found that more women than men were cutting hours and leaving work at the beginning of the pandemic, then more men started to do the same.

“I know a greater number of moms who stay home now because they have so much to keep track of with hybrid learning,” Rowland said.

Pros (and cons) of online learning go beyond finances

Virtual learning caused hardships for many families, with very real downsides widely reported during the coronavirus pandemic. But some parents of virtual learners saw big benefits over the past year.

More than four out of 10 (43 percent) parents of remote learners said the experience has had a positive effect on their children’s education while one in three (33 percent) said it had a negative effect.

Was your family negatively affected by remote learning? As kids return to in-person schooling, it’s worth thinking ahead to the steps you can take to recover financially. Here are three tips:

Keep an eye on cash flow

If you had to cut back on hours—or even quit your job due to virtual learning—and your kids are going back to school, you may be able to increase your hours or start a job hunt. Focus on getting earnings back on track first. “Cash flow is king,” Exelby said.

Work on paying down debt

The survey found that almost one in four (23 percent) parents of virtual learners say the accumulated credit card debt as a result. If you’ve got debt on high-interest credit cards, look for a credit card with a 0-percent balance transfer offer or another way to restructure that debt to pay it down faster, Exelby advised. And before you throw a stimulus check at your debt, consider whether you’d be better off putting that cash into savings instead, he said.

Consult with a financial planner or create a plan on your own. A good financial plan should include: a way to save for emergencies, a plan to get out of debt, a proper insurance audit to make sure you’re not overpaying or underinsured, and a plan for investment so that someday you can stop working and still eat, Rowland said.

“Having a plan is 100 percent better than not having a plan,” she stressed.

In the meantime, Zelinka said his kids have done well and learned resilience from virtual learning. But he recently found out they both will go back to in-person learning at the end of the school year. And he can’t wait.

“I am very much looking forward to the day when they go back to school,” he said. “I did the math, and there will be exactly 12 days where they are both in school before summer vacation starts.” 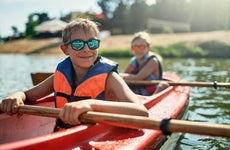 Poll: Many parents will put summer childcare on a credit card this year 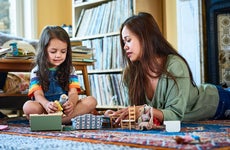 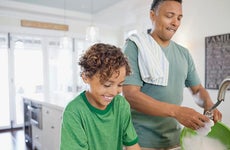