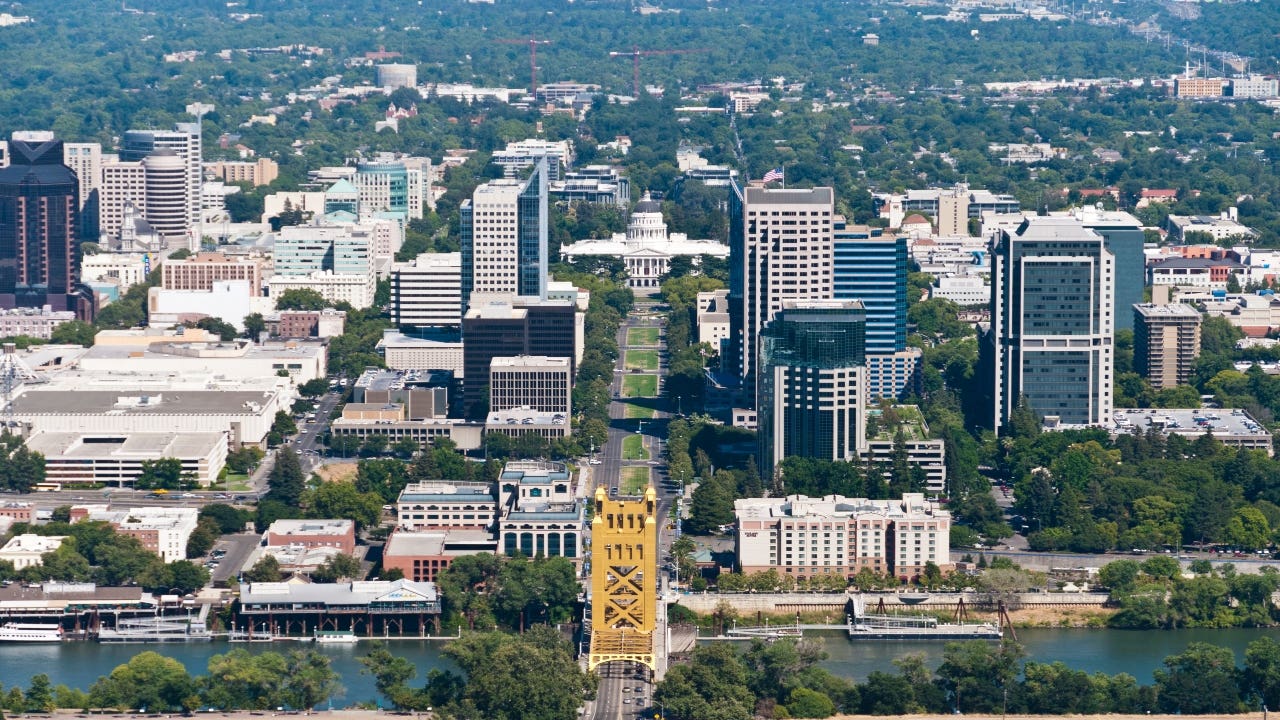 While fewer people have been moving to California in recent years, The Golden State continues to offer a gold standard of living. California ranks sixth in Sharecare’s most recent Community Well-Being Index, which means that residents here have a solid sense of purpose, with good social relationships and pride in where they call home. Some of the biggest companies in the world — including Apple, Alphabet, Netflix, Salesforce and Wells Fargo — also call the state home. Whether you’re coming to California to chase a professional opportunity or simply looking for more reasons to be outdoors, here are the best places in the Far West of the U.S. to put on your list.

Sacramento tops our list of the best places to live in California for one big reason: It’s actually affordable by California standards. The median home price was $460,000 at the end of 2021, according to Redfin, making the capital of California significantly more budget-friendly than many of the other major cities in the state.

Paying less doesn’t mean you get less in terms of enjoying all that California has to offer, however. While Sacramento isn’t next to the beach, you’ll have easy access to Northern California nature, including a 32-mile pathway that winds through the city and stunning hikes in the surrounding area. When you’re done sweating, reward yourself at any of the 50-plus craft breweries in the area, a packed calendar of live music and a culinary scene focused on fresh ingredients from the region’s nearby farms and ranches.

Like a lot of other big cities in California, San Diego lost some residents in the pandemic. However, this coastal city’s bright future means there are reasons to return, with projects like an eight-acre downtown research and development district for life sciences, a massive public space called Seaport San Diego and others in the works.

You don’t have to wait for those to be complete to call San Diego home, though. With a large naval base, the government is one of the city’s biggest employers, and Kaiser Permanente, General Dynamics and SeaWorld all have big operations here as well, so newcomers (or boomerang residents) have an assortment of professional opportunities. The city’s nightlife is top-notch, with plenty of bars and nightclubs in the downtown Gaslamp neighborhood, and during the day, the ocean will be calling your name.

You might see San Francisco on other lists of best places to live in California, but nearby Oakland has a major edge: You might actually be able to afford it. The Bay Area is notorious for insane housing costs, but the median price of a home in Oakland was $800,000 — significantly less expensive than the neighbor across the water.

Oakland offers other ways to save, too, with the ability to walk, bike or use public transit instead of your own car. What also sets Oakland apart — not just in California, but among all big cities — is its diversity. The city is the top-scoring destination in the National Equity Atlas diversity index, so you can expect to be part of a community of different faces, voices, flavors and creative energies here.

Long Beach delivers what seems almost impossible to do in Southern California: the ability to live somewhere without absolutely having to have a car. With a Walk Score of 73, this Los Angeles neighbor allows you to forget where you parked and walk, bike or take advantage of the Metro Blue Line, the region’s light rail system.

While you’ll need plenty of room in your budget to afford Long Beach, the median sale price of a home ($767,000 as of November 2021, Redfin reports) is actually a bargain for Southern California. That price tag gets you exactly what’s implied in the city’s name: more time with sand between your toes. Long Beach also has a blossoming creative scene, renowned street art and a bike-friendly culture for when you want to turn your two feet into two wheels to get around.

If Long Beach is too long of a trek for you to get to Los Angeles, then it’s time to figure out what part of the city you can afford to call home. According to Redfin, the median price of home in Los Angeles was $950,000 near the close of 2021, so you’ll either need a.) a lot of cash or b.) the ability to qualify for a jumbo mortgage.

If you can do it, you’re in for a real treat: a balance of Hollywood glamour with access to incredible hiking and biking in the mountains alongside the ocean. While living here is all about enjoying the SoCal sun, Los Angeles is a hub of work opportunities, particularly in the technology space. A report from CBRE revealed that tech jobs in the L.A. metro area increased by approximately 18 percent between 2015 and 2020 alone. Additionally, L.A. is gearing up to host the 2028 Summer Olympic Games, which means investment in infrastructure that can make an impact for residents long after anyone wins a gold medal. A new Airport Connector System will make getting to LAX — the region’s busiest airport — a reality without getting in a car.

To determine the best places to live in California, we evaluated data from the biggest cities in the state to get a clear picture of which places offer a reason to move here and stay here. What makes a city ideal for you will not be a perfect match for someone else, but there are common factors most everyone looks for when searching for a new place to call home. We assessed these areas:

Keep in mind: This list is simply a place to start for your search. There are plenty of smaller cities, towns and villages in California where you might feel right at home. As you think about starting a new chapter with a move, consider, too, what you want out of life. Once you have an idea, it’s time to start looking at the best mortgage lenders in California to figure out who can help you buy a home in today’s competitive market.