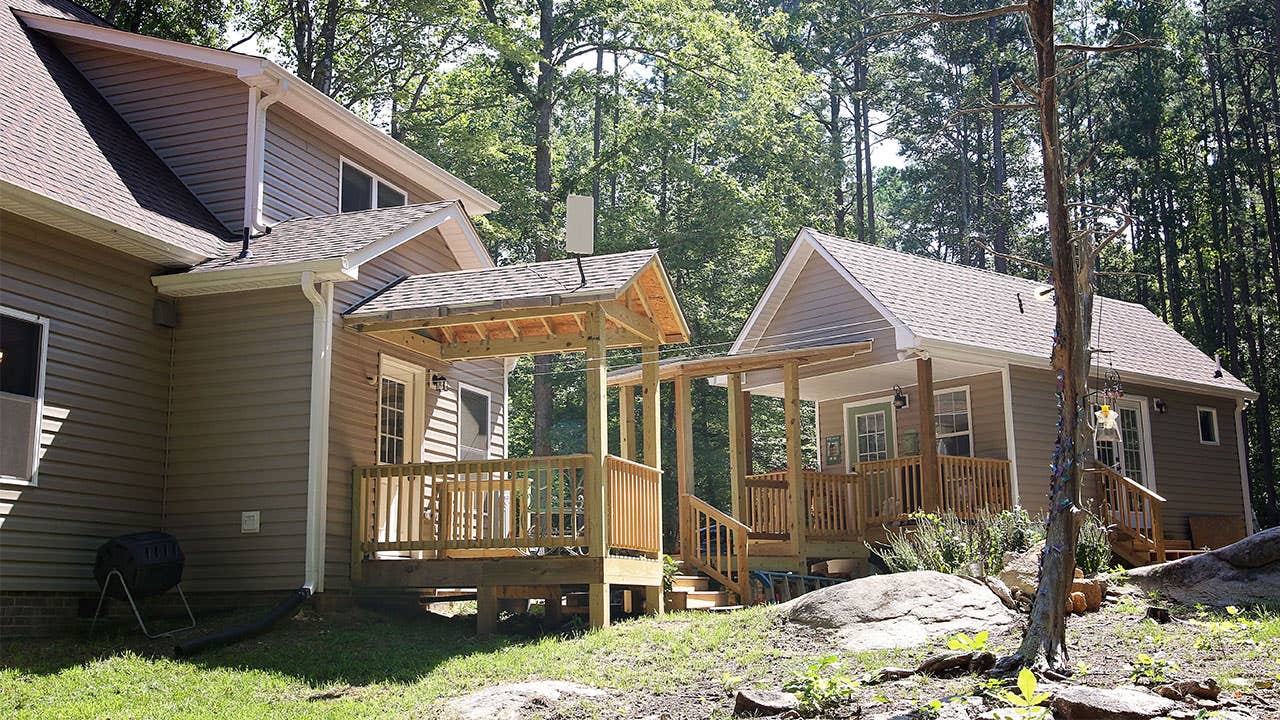 Thirty miles north of Durham, in Roxboro, North Carolina, on 4 acres of land live the Majors: Jon and Victoria and their newborn son, plus Victoria’s mother, Terry Normand. When the Majors bought their property five years ago to build their dream house on it, they didn’t know it would also include a space for Terry.

“My dad ended up passing away, and I really wanted to take care of my mom. She’s getting older and was coming up on her retirement age, and she was still living in Florida,” Victoria says. “We intended to give her some of the property so she could build. We were thinking it would be a completely separate house. And then, come to find out, with North Carolina law, the houses had to be attached.”

The solution was to create a separate tiny house, connected by a breezeway. The Majors and Terry share the same utilities and are just steps away from each other.

Living on the same property, whether in a granny suite or under the same roof, has gained popularity. Multigenerational housing, which consists of two or more adult generations, 25 years or older, in one household has risen to a record 64 million people in 2016, according to a Pew Research Center analysis of census data. This is a 23 percent increase from 2009, when 52 million people lived in multigenerational housing. The trend has been on the rise since the 1970s.

The reasons can be attributed to a number of things, says Domonique Rodriguez with Berkshire Hathaway in Ventura, California. Among them:

“I would say it’s split pretty evenly. I’ve worked with families that need help from in-laws or parents, and I’ve also seen situations where the children felt bad that the dad was living by himself in another city,” Rodriguez says.

Some 24 percent of adults ages 55 to 64 lived in multigenerational housing in 2016, while 21 percent were 65 and older. This is one reason older Americans are less likely to live alone today than they were in 1990, according to Pew Research.

Although living together might solve problems for family members, such as financial or caretaking burdens, it can also create challenges. Experts say everyone should clearly communicate their expectations before moving in together.

There are many needs homebuyers have to consider when shopping for a multigenerational home, including what it will look like, says Melissa O’Brien with Dave Perry-Miller Real Estate in Dallas.

“You have to find a house that suits everyone’s taste. Some people like different architectural styles or interior designs, so you have to come to an agreement about that,” O’Brien says.

The Majors had already built a house when they invited Terry to live on their property. Victoria says she and her mom have different decor and design taste, so she was worried there might be some friction.

“I have a more modern, industrial style and my mom is eclectic. She’s traditional,” Victoria says. “That was a little bit of a problem at first, but we came to an agreement. Since our house was already built, we agreed that she would design the outside to match our house and she could do whatever she wanted with the interior.”

Space is also an essential part of the equation. Decide how much space is needed so that everyone is happy, Rodriguez says.

“You might get a large home but when you move in together it doesn’t quite work, so my first recommendation is to figure out what’s comfortable for your family. If you need that separation, you’re going to need to find something with a guest house,” Rodriguez says.

For clients whose parents move in with them, Rodriguez says, most of them choose to add a mother-in-law suite or guest house onto their existing home.

“What I’ve mainly seen are people staying put in their houses and adding on. Many of them use home equity loans to finance these additions,” Rodriguez says.

Buyers should also be prepared to sacrifice some amenities, like a pool or extra bathroom, in order to get the space they need within their budget.

Find a location convenient for everyone

It can be an uphill battle to find a location that suits everyone’s needs, but usually the family members who work outside the home get a bigger say, O’Brien says.

“Older adults usually want to stay near what’s familiar to them, but that’s not always convenient for the adults who have to commute to work.”

Find a place that offers amenities within walking distance so that retired adults have the option to take public transportation, walk or drive to stores, clubs or other important destinations.

“You don’t want to become the designated driver for your parents if they can’t get around anymore, so pick an area that gives them walkable access to places they like,” Kevin Paffrath, president of Meet Kevin in Santa Barbara, California, says. “I’ve seen people sell houses because of this.”

There are many financial responsibilities and benefits attached to homeownership. On one hand, owners are responsible for property taxes and utility bills. On the other hand, they get tax breaks and can access the equity in their home in the form of cash or credit, via a home equity loan or line of credit.

It’s smart to agree on how bills and assets will be handled before you pick bedrooms.

“Probably one of the biggest things people fight over are financial matters. Find out who’s paying for what up front. That could help you avoid problems later,” Paffrath says.

For older adults who move in with their adult children, Paffrath recommends treating the arrangement like renting a room, rather than trying to allocate equity buildup or tax benefits.

In the Majors’ case, they were able to work out an arrangement with Terry, including privacy boundaries and what percentage of the electric bill each would pay. These conversations were helpful in creating a co-existence that suited everyone, Victoria says.

“It’s funny because, in the beginning, my husband was worried about my mom living so close,” she says. “Now that the baby’s here he says he doesn’t know what we’d do without her.”