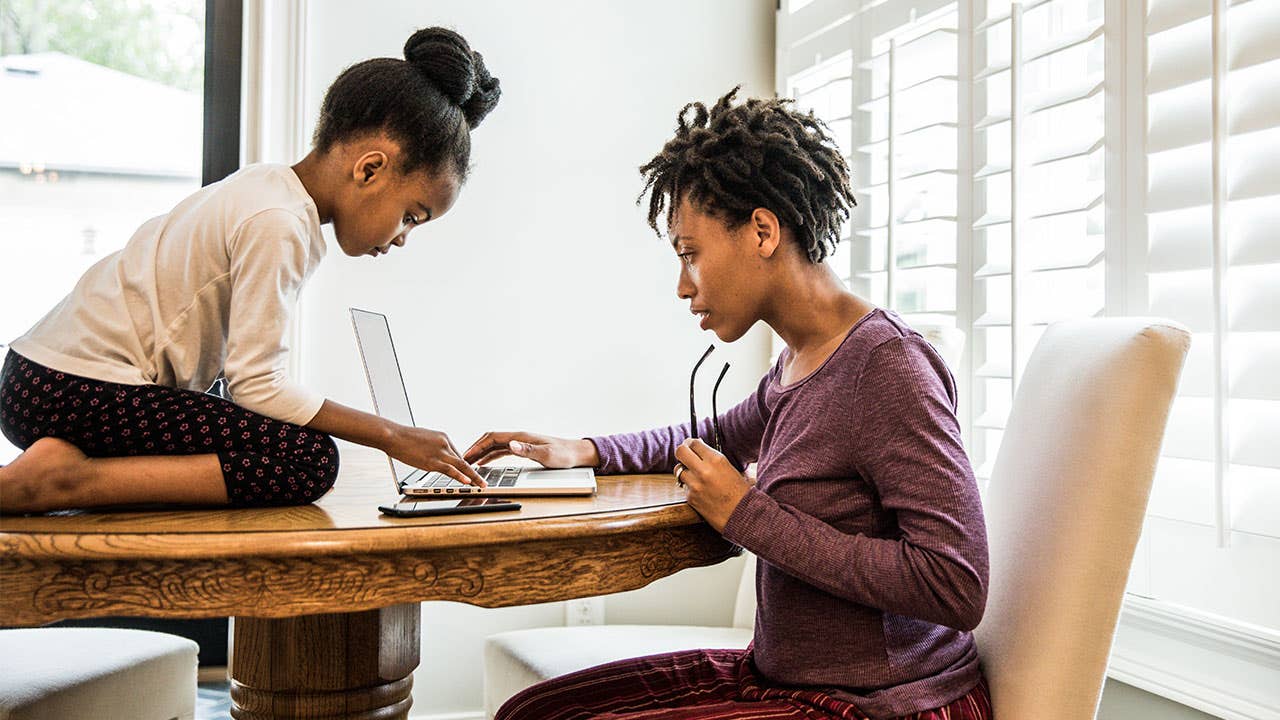 If stress keeps you up at night, you’re not alone.

Sixty-nine percent of Americans say they occasionally lose sleep due to something they’re worried about, a new Bankrate survey reveals.

Research firm GfK Custom Research polled 1,000 Americans on behalf of Bankrate to find out what’s keeping them up at night. Respondents were able to choose more than one answer. 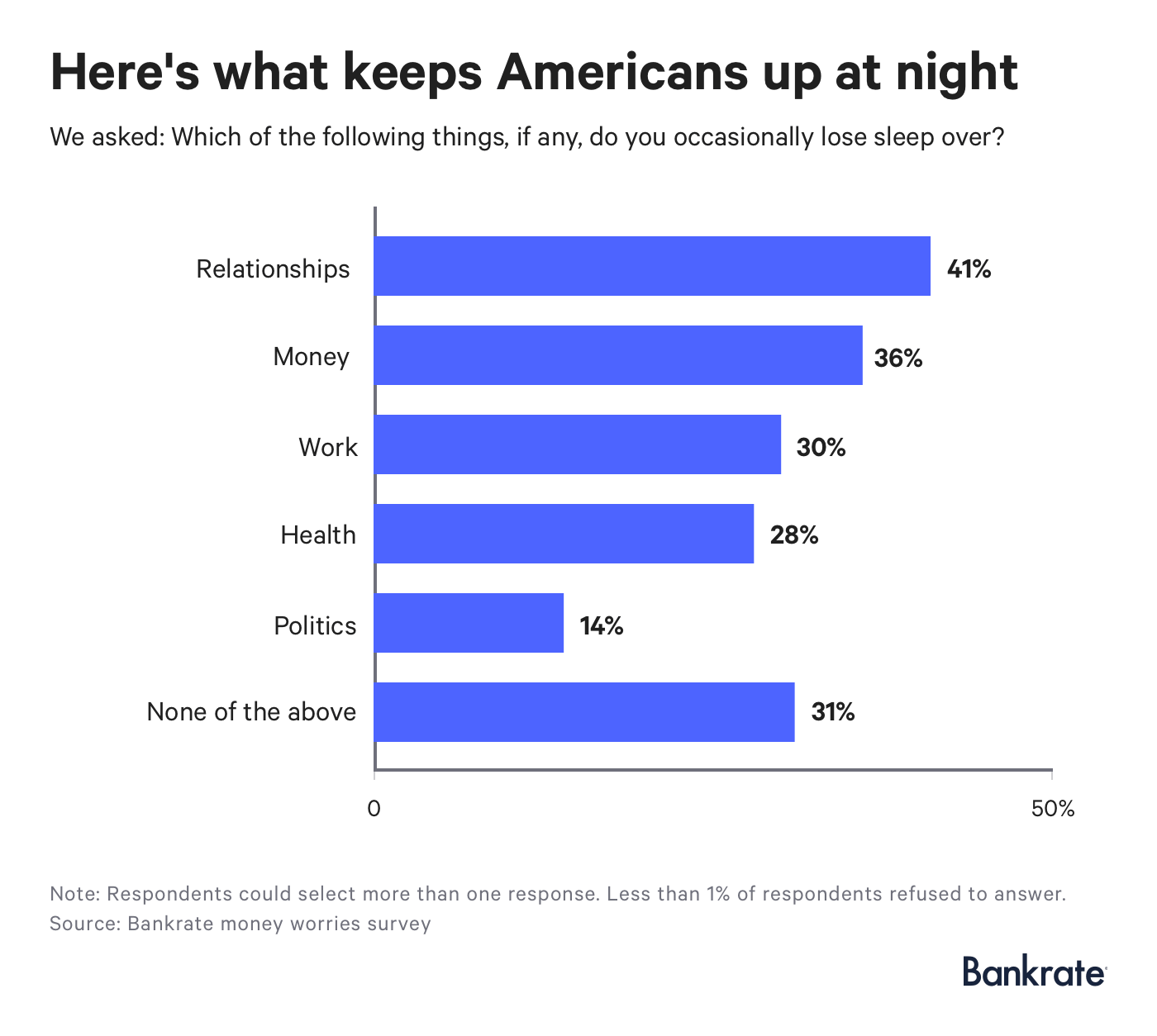 Older millennials (ages 28 to 37) are most likely to say they occasionally lose sleep — 77 percent of them lie awake at night because of something on their minds.

Adults within that age group are going through a transitional stage in their lives, says Mary Alvord, a psychologist and public education coordinator. Many of them are starting families and trying to become financially stable.

Jenny Dempsey, a 34-year-old social media and customer experience manager in Carlsbad, California, says she loses sleep because she’s stressed about her financial situation. She’s also concerned about what’s happening with her family. Her younger sister — who’s also one of her best friends — is working multiple jobs, facing a child custody battle and struggling to keep a roof over her head.

“I am worried all the time about stuff that she’s going through, so I kind of carry it on my own shoulders,” says Dempsey, who also coaches people trying to meet their health and wellness goals.

About 36 percent of people surveyed by Bankrate say they’re not catching enough Zzz’s because they’re worried about money. But that’s not the No. 1 reason Americans say they’re losing sleep. More people (41 percent) say their relationships occasionally cause them to toss and turn at night.

Family-related issues and concerns are particularly problematic. They’re the biggest source of stress among people who lose sleep because they’re up thinking about their relationships.

“If you’re economically secure but someone in your family is not, you might worry about what’s going to happen to them,” says Jennifer Ailshire, a professor at the University of Southern California who has researched the connection between poor sleep and family relationships. “You could have worries from a relationship because you’re actually in conflict with someone. Or it could be a very good relationship, but you’re concerned about a sibling or a parent or an adult child who themselves are going through either economic hard times or their own relationship issues or maybe health scares in their life.”

Half of millennials lose sleep over relationships. Just 36 percent of baby boomers and 42 percent of Gen Xers say the same.

Compared with members of older generations, millennials are also more likely to say they lose sleep because they’re stressed about work (39 percent). That’s true for only 22 percent of baby boomers and 37 percent of Gen Xers.

Why older adults are stressed out

For younger baby boomers (ages 54 to 63), money is the top concern keeping them up at night. Thirty-nine percent say financial worries occasionally keep them from falling asleep.

“The baby boomers — especially the younger ones — are at this really critical period where they need to be saving for retirement. But a lot of people came through the recession and their financial situation is worse because of it,” Ailshire says. “At the same time, school is more expensive. Helping a child buy a house is becoming more expensive, so I think that that particular demographic is really feeling the financial squeeze right now. On top of which, they have aging parents.”

The oldest Americans, of course, are most concerned about health. Twenty-nine percent of survey respondents said they lose sleep thinking about health-related issues.

According to research from the American Psychological Association, 60 percent of adults say personal health concerns or health problems affecting their family are a very or somewhat significant source of stress.

Older millennials are slightly more likely than anyone else to say that money is keeping them up at night. Forty-three percent of them say financial concerns sometimes prevent them from getting a good night’s rest. 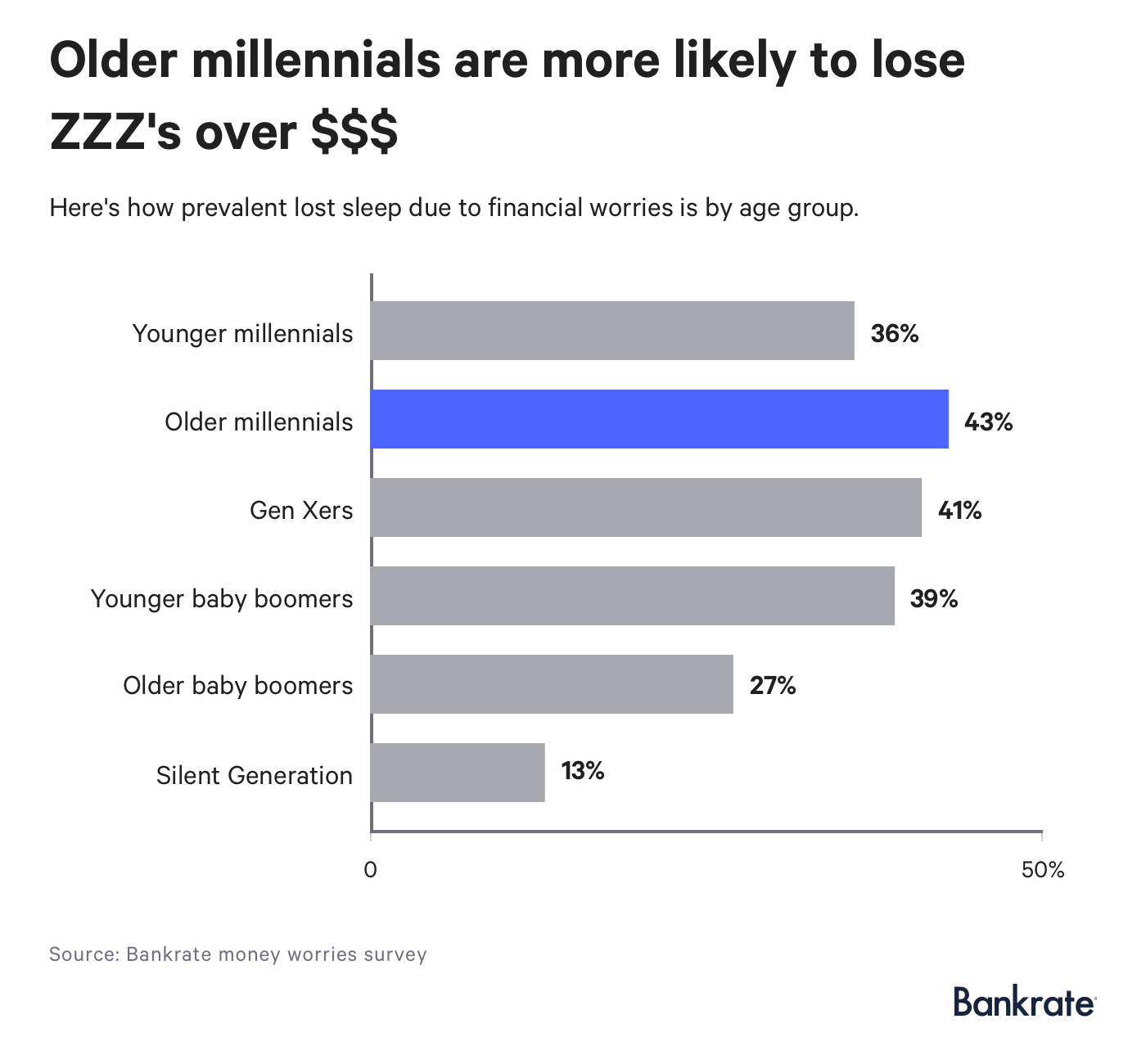 Top financial concerns among all of the participants in the survey include:

Twenty-two percent of Gen Xers and 25 percent of younger baby boomers say they sometimes lose sleep because they’re worried about being able to save enough for retirement. Compared with 6 percent of adults who are older than them, about three times as many millennials (17 percent) say they stay up thinking about their educational costs.

If you can’t sleep, try journaling and writing about what’s worrying you, says Brad Klontz, associate professor of practice at the Financial Psychology Institute.

“Dump this stuff from your brain onto paper. And I think part of us relaxes when we believe that maybe we’re perhaps going to take some steps to fix this stressor.”

Exercising, doing yoga or mediating are other ways to reduce your stress levels and help you calm down before bed, Ailshire says.

Keeping money worries from ruining your chances of getting a good night’s rest often starts with addressing the negative feelings you have about your financial situation.

“Get over the shame, come up with a list of things you need to do and then start asking for help,” Klontz says.

You can always turn to a fee-only financial planner for guidance, particularly if they’re going to act in your own best interest. You can also speak with a nonprofit credit counselor if you have credit-related problems.

Your money troubles won’t go away overnight. Decide what you can do right away to solve them and within the next year to finally nip them in the bud. For example, if saving for retirement is an issue, you can immediately start cutting back on expenses, says Jennifer Faherty, founder of Financial Wealth-being in Ridgewood, New Jersey.

Find a side hustle that can help you earn extra money. Or, find an online site that you can use to sell household items you no longer want, says Donovan Brooks, founder of Storyline Financial Planning in Saint Joseph, Missouri. Long term, you can consider moving or downsizing to save more for retirement, Faherty says.

This study was conducted for Bankrate.com by GfK Custom Research North America on its OmniWeb online omnibus. The sample consists of 1,000 completed interviews, weighted to ensure accurate and reliable representation of the total population, 18 years and older. Fieldwork was undertaken June 29-July 1, 2018. The margin of error for total respondents is +/- 3%.