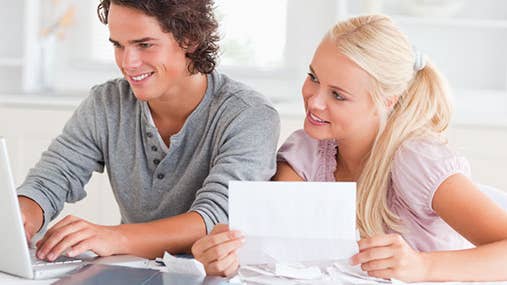 Wedding bells might be ringing, but the jingle of combining your funds into one account might not sound nearly as pleasant. Couples face a lot of money issues when they get together.

Lashonda Rogers of Atlanta has been married for seven years. But back when she tied the knot with her husband, merging finances proved difficult in the beginning of their marriage.

Like what the Rogerses experienced initially, there are risks associated with finances during a couple’s lifetime after the honeymoon is over.

Some of the most common financial problems new couples encounter include overspending and building up a load of debt, and being financially separated and not having a plan, says Charles Schmitz, who, with his wife, has studied and written about marriage.

Here are six tips Bankrate compiled from interviews with Schmitz and Paula Levy, a licensed marriage therapist in Westport, Conn., to help young couples manage their merged finances after walking down the aisle.

Put money on the agenda

“Money is a big issue among couples” says Levy. But not too many recognize it. For newlyweds, the first step is to acknowledge the importance of the money issue and to bring it on the table.

It also helps to begin your financial management by setting up financial goals for one year, five years and 10 years at the initial phase of the marriage, said Schmitz in an email interview.

Rein in the purchases and the debt

According to Schmitz, a large amount of debt is the No.1 cause of stress in a marriage. Much of this debt can start to accrue early on in a marriage when a couple is merging finances but still spending a lot.

“Newly married couples have a tendency to purchase things beyond their economic capacity. They want everything immediately,” said Schmitz. “They get themselves deep in debt before they are ready to handle responsibility.”

Mark Pedersen and Shasha Luo got married early in July. And as much as Pedersen wanted to surprise his new wife with a car, he knew he couldn’t because of the $24,000 student loan he owes. Pedersen says if he does decide to get her a car, “It won’t be brand-new.”

So how do you handle the urge to want things? Schmitz suggested sleeping on it. “You would be surprised at the number of purchases you don’t make if you sleep on it.”

He also said young couples should set a limit for how much they can spend on a purchase.

Nonetheless, spouses can still have some “indulgence” money, Levy says. “Women tend to spend more on clothing while men tend to spend more on electronics. You don’t want to ask your wife for a new Apple product,” she says. Work on a budget so that you can each have an outlet for spending. Otherwise, it can lead to more tension in the relationship.

It can be hard for new couples to merge finances immediately after getting married, but it’s almost always good to establish a joint account, says Levy. She adds, “Separating finances may work fine in a short run because nothing needs to be worked out, but not when you look down the road.”

Expenses that usually need to be covered by the joint account include houses, cars, child care, utilities, etc. It’s important for a couple to outline the monthly budget for the joint account, Schmitz said.

It differs from couple to couple how to share responsibilities to contribute to the joint account. “There’s no right or wrong. You have to figure out what’s reasonable and what’s not for you,” says Levy.

Just take newlyweds Cameron and Cassie Doolady as an example. Cameron Doolady is a veteran and a student at the University of Iowa, while his new wife is a nurse. Although they have different levels of income, they put their money into a joint account.

“Having a shared account forces you to have communication and not to hide secrets,” Cameron Doolady says. “So far, we haven’t had any tension.”

It’s crucial for a couple to be honest and transparent with each other and communicate on a regular basis. Schmitz suggested that couples should discuss their financial status monthly.

“You would be surprised what can irritate your partner when you don’t tell,” Levy says. One of her clients didn’t understand why his wife got so upset after she found out that he lent $1,000 to his friend. He thought it was OK because he’d loaned money to friends when he was single.

Investing is another key area for couples to discuss and decide on together, Levy says. “If an investment fails, your partner has to share the repercussions. It will affect your credit as a couple.”

Set aside an emergency fund

Levy once worked with a couple who initially contributed equally to their joint account. Later, the wife injured her neck and lost her job, making it impossible to keep up the contributions to the joint account. While she wanted her husband to take over her responsibility, he insisted that she make up for the loss with her savings.

“With these tough economic times, young couples don’t have a plan for losing a job, difficult health issues or other situations impacting their finances,” said Schmitz. “Don’t blame each other if things go wrong.”

The couple later decided to put part of their savings into a new emergency account. Now if they run into problems later, they’ll have money to use right away.

When two people get married, not only do they need to merge their finances, but also their lifestyles, according to Levy. For couples with income discrepancies, they may come across situations when one person wants to have a luxury meal or go on a vacation, and the other can’t afford it.

In the Rogerses’ case, despite the fact that they were critical about each other’s spending habits at first, they learned to accept and compromise. They also cut back on their socializing expenses in general to support the other’s hobby.

“You have to plan together,” says Levy. “Otherwise, you are essentially living two different lifestyles under one roof.”

More On Couples And Money: