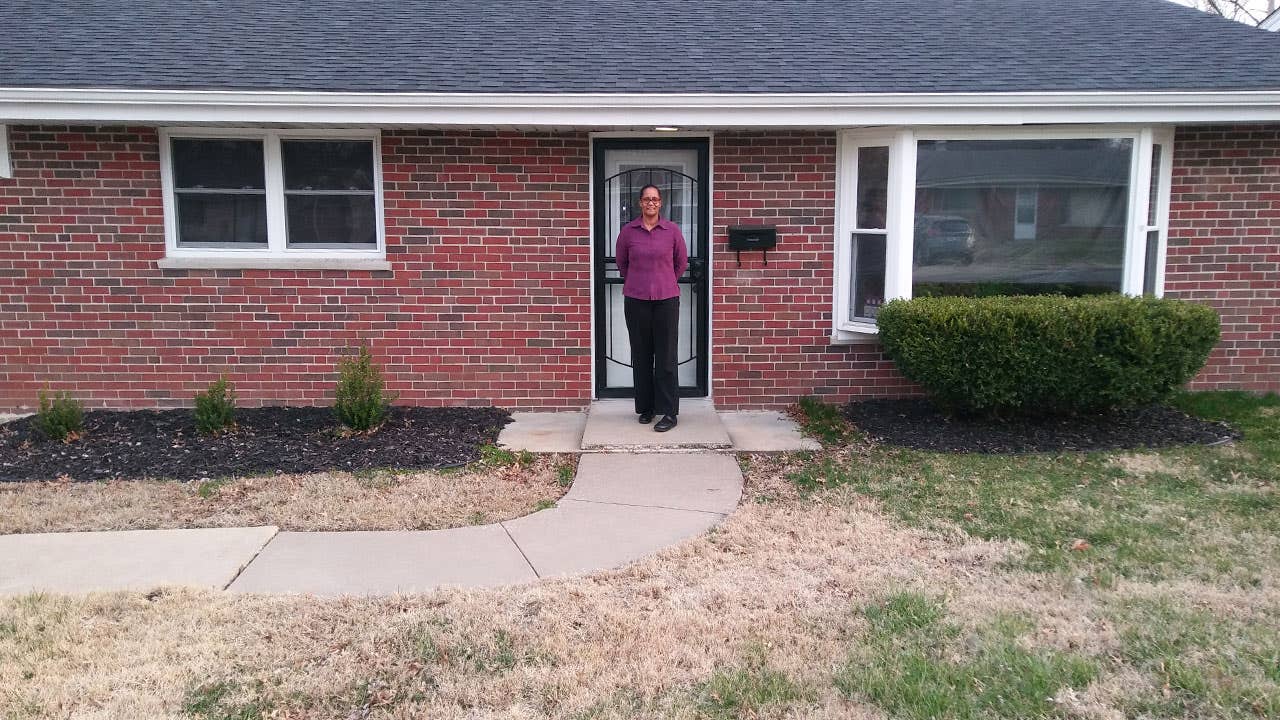 Sharon Townsend’s U.S. Army service in the 1980s was brief, but when she recently decided to buy her first home she discovered that her military benefits last a lifetime.

Townsend assumed homeownership was out of reach because she wound up with poor credit after her divorce, she says. The disabled veteran also had no clue that the U.S. Department of Veterans Affairs (VA) guarantees home loans for military service members, veterans and their families — or that she was eligible to use the program after all these years.

A chance connection with a local real estate agent led her to Veterans United, a mortgage lender that works exclusively with VA borrowers. Her loan officer educated her about VA loans and worked with her to resolve credit blemishes that had previously limited her homebuying options, she says. Veterans United enrolled Townsend into a credit-repair program that she says boosted her credit score from 475 to 670 in just one month by contacting her creditors and utility providers to get derogatory items removed that were old or inaccurate, she says.

“They got me a secured credit card, which also brought my score up,” Townsend tells Bankrate. “I didn’t think I would be able to [buy a home], but they told me they wouldn’t give up on me.” They didn’t. Some months later, Townsend closed on her first home, a newly renovated ranch for $77,000 in Bellefontaine, Missouri, thanks to a VA loan with no money down and no out-of-pocket closing costs. The seller even provided a one-year home warranty.

Townsend is part of a growing number of first-time military homebuyers who are tapping into their VA loan benefits to buy a home over other types of mortgages. According to a March 2019 study by the Consumer Financial Protection Bureau, the share of servicemembers using VA loans to buy their first home has soared since the mortgage crisis. The share was just 30 percent before 2007 and increased to 63 percent by 2009 — and to 78 percent by 2016, the CFPB reported. In 2006 and 2007, conventional mortgages accounted for 60 percent of loans among first-time home-buying servicemembers. By 2016, that share fell to 13 percent by 2016.

There are many benefits to VA loans. Since they are partially guaranteed by the VA, they come with competitive interest rates that are typically lower than conventional loans and other government-backed mortgages. Servicemembers, spouses and dependents can get these loans often without having to come up with a downpayment or pay private mortgage insurance, or PMI, according to the VA’s website. The VA loan benefit also doesn’t expire once you leave the military and extends to eligible spouses, too.

‘This isn’t your grandfather’s VA loan’

One of the biggest misconceptions about VA loans is that some in the industry assume that these loans don’t perform as well as, say, conventional financing, says Chris Birk, director of education with Veterans United.

That is a myth.

“This isn’t your grandfather’s VA loan,” Birk says. “There’s been so much investment in tech and automation that mortgage lenders have done. But there’s still this idea that because it’s a government-backed loan that it’s littered with red tape and bureaucracy, and it’s going to take forever to close.”

In fact, VA purchase loans closed within 54 days, on average, in Dec. 2019 — the same time as FHA loans and just four days later than the 50 days it took for conventional purchase loans to close, according to Ellie Mae.

Furthermore, the average percentage rate of VA loans that closed within a 90-day cycle was in line with other loan-closing rates at 73.1 percent in Dec. 2019, Ellie Mae reported. That’s about 1 percentage point lower than FHA’s average closing rate of 74.2 percent and a tad lower than the 77.8 percent for conventional loans.

To put it simply, VA loans perform well, and sellers shouldn’t shy away from those offers, Birk says.

“There’s a misconception that a zero-down or low down payment loan is inherently risky,” Birk says. “There’s a fixation among lenders on credit and [debt-to-income ratio] as predictors of default. I don’t know if that gives you a holistic picture.”

Lenders who specialize in working with military borrowers say many of their staff members are veterans themselves. Many borrowers they work with have been on multiple deployments, move around often, have service-related disabilities, or sometimes have difficulty readjusting to civilian life. It helps to have a loan officer across the table who has been there and understands their unique needs, says Rob Posner, CEO of NewDay USA, a Maryland-based national VA lender.

“Our goal is to put every veteran in a home who wants to buy a home and can afford to make their mortgage payments,” Posner says.

For many first-time homebuyers, especially servicemembers, saving up enough money for a down payment and closing costs is a major hurdle to homeownership. NewDay rolled out its offers an  “Operation Home” program in December 2018  to match veterans with sellers who are willing to offer a concession that covers closing costs. A disclaimer on its website, though, does state that VA borrowers may pay a higher purchase price or receive a higher interest rate if they pay no closing costs.

In the first four months after the program launched, 80 percent of NewDay VA borrowers received seller concessions of 4 percent to 5 percent toward their closing costs, Posner says. The initiative is successful, in large part, because NewDay fully underwrites its loans upfront, giving sellers more confidence and certainty that the deal will close, he adds.

“It streamlines the process if we are doing the underwriting on the front end; we make a significant investment to do that,” Posner says.

‘More than numbers on a page’

After the housing crisis in 2008-09, conventional lending rules tightened considerably, locking out a large swath of potential homebuyers from accessing mortgage credit. From the ashes of the downturn, online, nonbank lenders surged in number and filled a void left behind by larger banks that pulled back from mortgage lending.

The rise of nonbank lenders provided an opening for companies that wanted to specialize in VA loans to make their mark. Still, there’s a notable education gap among many servicemembers and veterans about their VA loan benefits, says Joshua Potts, a former U.S. Marine and owner/broker of Spartan Realty in Spartan Stafford, Virginia.

A sizable chunk of his business comes from military homebuyers.

“The military does a great job of training you for war, but they don’t train you for getting out (of the service) and for civilian life,” Potts says. “Having a lender that specializes in working with veterans means they’ve become really good at it, which allows that lender to train their folks right and fine-tune the process.”

VA loans come with key perks that other types of financing don’t have. For starters, VA borrowers don’t pay mortgage insurance (PMI) or a down payment. However, there is a 2.30 percent funding fee for regular military members, reservists and National Guard members who are first-time buyers and put zero down, according to the VA. The fee, which is reduced if the service member puts down 5 percent or more,  can be rolled into the mortgage.

Although the VA loan program doesn’t spell out a minimum credit score requirement or maximum debt-to-income (DTI) ratio, most VA lenders have their own standards in place to offset some of their risk. Unlike with other loan types, a borrower’s spotty credit history or a high DTI ratio aren’t automatic disqualifiers for a VA loan, says Kevin Torres, a mortgage product strategist with Navy Federal Credit Union.

“We work closely with our members to find the right mortgage,” says Torres, who notes that Navy Federal has seen the share of its VA loan business among eligible first-time buyers jump from 44 percent in 2008 to 90 percent in 2018. “We take a look at the overall picture, and we look at borrowers as individuals rather than numbers on a page.”