Skip to Main Content
5 min read Published March 14, 2022
Written by
Kellye Guinan
Written by Kellye Guinan
Kellye Guinan
Edited by
Rhys Subitch
Edited by Rhys Subitch Auto loans editor
Rhys has been editing and writing for Bankrate since late 2021. They are passionate about helping readers gain the confidence to take control of their finances by providing clear, well-researched information that breaks down otherwise complex topics into manageable bites.
Rhys Subitch

It’s no secret that used cars are better deals. Depreciation eats away at a car’s value, making it easy to get underwater on a loan — especially if you opt for a luxury vehicle. In fact, the average car costs 17 percent less after one year, according to data from iSeeCars.com.

New cars are also getting much more expensive thanks to inflation and limitations on critical parts. Since 2020, there has been a shortage of semiconductors, which are the main power source for modern cars. Used cars don’t face this shortage, making them a solid investment if you still want the most current features without the current MSRP on most vehicles.

These nine models faced the most depreciation, but many still come with a hefty price tag because of their luxury status and features.

Recent model years have similar safety features, including blind spot alert and collision warnings. Specific features will depend on the model you find. In general, expect to save around $20,000 for similar features when you opt for a used 5 series.

The Hyundai Sonata is one of the best cars to buy used if you want to take advantage of steep depreciation. However, it’s not a luxury car. So while it has an average 36 percent depreciation after the first year, there isn’t much of a difference in price between a new 2022 trim and a used model.

Still, there’s no reason not to take advantage of the savings. Recent model years of the Sonata have similar features compared to 2022 models.

The 2022 Q50 Luxe — the most basic trim offered by Infiniti — has some nice standard features, including lane departure warnings and decent fuel economy for a luxury sedan. Most importantly, similar used trims are around $16,000 less than their new counterparts.

Used models are also relatively cheaper than the Q60, which also made the list. Since the average depreciation is so high, this isn’t shocking. But it does mean that you may be able to find more features for less on similar Infiniti makes.

The Mitsubishi Eclipse Cross is one of just two SUVs that make the list of best cars to buy used. Even the 2022 trims on this model have a relatively low price tag when compared to other SUVs. Because of this, your actual savings won’t be as high as with some of the luxury sedans. Still, a depreciation of over 30 percent after the first year is nothing to scoff at.

The basic trim comes standard with lane departure warnings and hill assist on the 2022 model — these aren’t necessarily standard in older models. You may be able to find them, but as with all used cars, the selection of features depends largely on available inventory.

The Ford Mustang is available in a wide variety of trims — which means a wide variety of starting MSRPs and features. Because of this, depreciation after the first year averages high. However, you’ll have a huge selection of trims and features on the used market. This can inflate the price, which means you may save more with a new car if you aren’t attached to a specific look or feel.

If you have a specific trim in mind, your best bet is to browse used car inventories that carry it. The exact features you’re looking for may or may not have come standard in previous model years, so it pays to spend time in the research phase when on the hunt for a used Mustang with good savings.

While the Mercedes-Benz GLA has a relatively high level of depreciation, it may not be the easiest car to buy used if you want substantial savings. Based on used models listed on trusted websites like Edmunds and KBB, the actual savings off a new GLA may only be a few thousand — as compared to the reported average savings of around $13,000.

Like all vehicles, this depends largely on the features available with the used car. The basic trim for the 2022 model comes with a wide list of standard safety features like brake assist. Older model years may have kept these optional, so ensure your used car has the features you need.

The base model for the Infiniti Q60 has an MSRP of $41,750. Its standard features are luxurious — of course — and include a number of connectivity features. But unlike many current 2022 vehicles, the base Q60 doesn’t have blind spot or lane departure warnings. These are available in pricier models, but you’d likely find a used car with these features for less.

Like other luxury vehicles, used trims of the Q60 vary widely in price. Depending on the features and trim you want, you may end up paying more than you would for a 2022 model with a basic trim. However, for vehicles with similar features, you can expect to save nearly $17,000 on average.

The basic 2022 Nissan Sentra has an MSRP of $19,610. But because of the wide range of optional features, it’s not hard to find used models that cost more than the basic new counterpart. Like the other non-luxury brands on the list, the Nissan Sentra sees a decent amount of depreciation after the first year — but you should only expect to save about $6,000 off MSRP between cars with similar features.

Blind spot warning, rear view monitors and Bluetooth are all standard on the 2022 model. Not all of these were standard on previous models, so you’ll need to carefully browse used car inventories to find a car with your preferred features.

The core model 330i and 330i xDrive sedans have starting MSRPs of $41,450 and $43,450, respectively. But while they start off less expensive than their 5 Series cousins, you’ll save less overall when you opt for used — average savings are just over $15,000 after depreciation.

Still, that’s not a bad discount for a well-known luxury vehicle. Newer used models have many of the same features as the current 2022 version, though exact specifications depend on availability. Overall, expect great horsepower and standard safety and controls that come with most recent models.

Financing a used car vs. new

There aren’t many differences between financing a new versus used car. Most banks and dealerships will offer financing for both — with some restrictions — and you may be able to take advantage of manufacturer financing for certified pre-owned (CPO) vehicles.

Other than these, the process for financing a new versus used car is largely the same. You’ll need excellent credit, strong income and limited debts to qualify for the lowest rates.

Used cars, especially luxury vehicles, are a much better deal than buying new. You’ll still be able to take advantage of modern features and design without the high price tag. Almost every manufacturer also offers CPO vehicles with additional warranties, which means additional protection on your car. And with financing from outside the dealership, you’ll be able to snag a low interest rate on an already cheaper car.

SHARE:
Written by Kellye Guinan
Read more from Kellye
Edited by
Rhys Subitch
Edited by Rhys Subitch Auto loans editor
Rhys has been editing and writing for Bankrate since late 2021. They are passionate about helping readers gain the confidence to take control of their finances by providing clear, well-researched information that breaks down otherwise complex topics into manageable bites.
Rhys Subitch
Auto loans editor 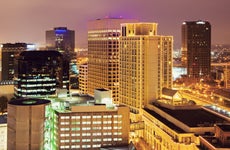 The 10 most affordable big cities for buying a used car 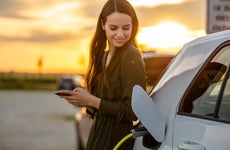 How to shop for a fuel-efficient used car 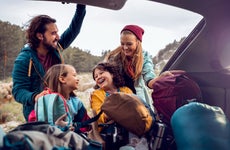