Skip to Main Content
3 minute read Published December 01, 2022
Written by
Kellye Guinan
Written by Kellye Guinan
Kellye Guinan
Edited by
Rhys Subitch
Edited by Rhys Subitch Auto loans editor
Rhys has been editing and writing for Bankrate since late 2021. They are passionate about helping readers gain the confidence to take control of their finances by providing clear, well-researched information that breaks down otherwise complex topics into manageable bites.
Rhys Subitch

The price of used cars continues to climb — with the amount financed up over $7,000 since 2020. In fact, the national average amount financed for a used car in the third quarter of 2022 came to $28,506, according to data from Experian. With new car prices also seeing a significant increase, these 10 cities offer a small break to your wallet.

The average monthly payment for each city was calculated using the average interest rate of a prime borrower (5.38 percent) and a 60-month term. Income statistics were retrieved from the U.S. Department of Justice. And average used car prices by city are from a study of sales conducted in 2021 by iSeeCars. While the exact amount you pay will be up to negotiation, you will at least have an edge when it comes to what to expect on the car lot.

There’s always one good reason to visit Orlando, but here’s another: its average car price is one of the lowest in the US. It’s also a car-heavy city, so if you’re living in the Orlando-Daytona Beach area or nearby, it’s worth a trip to snag a relatively inexpensive used car.

Baltimore has a few public and commuter routes for its buses and trains. But if you’re driving around the city, car shopping won’t put a huge dent in your budget. However, city dwellers may want to confirm the cost of parking and maintaining their vehicle against using Baltimore’s transit options.

Sure, the Harrisburg area makes the list of inexpensive used cars. However, most Pennsylvanians only drive about 11,000 miles a year. This means less paid in insurance, but it could mean you’re taking on a car payment that’s not worth the investment. Balance the amount you plan on driving against the cost before heading to a dealership.

Skirting in at just under $23,000, the Grand Rapids area is an affordable place to buy a used car. But it may not be worth it: Michigan comes in second on the GoBankingRates 2021 list of most expensive states to own a car. Factor insurance, maintenance and fuel with your average monthly payment to ensure you aren’t over budget — even with relatively cheap used cars available.

Ohio is the place to be if you want cities with inexpensive used cars. The Cleveland-Akron area is slightly more expensive than Columbus or Cincinnati — but just barely. And Ohio residents are about on par for miles driven each year, so it makes sense to invest in a reliable used car in one of the three Ohio cities that make the list.

Columbus and Cleveland are almost neck-and-neck when it comes to average car prices. Since there has been a slight shortage on used car lots, the difference in price is up to negotiation at the dealership. Plus, Ohio is the least expensive state to own a car.

Residents of Indiana drive a lot — about 18,000 miles compared to the national average of 13,000 to 14,000 miles. If you are willing to drive to Indianapolis, or already live in the area, it’s a good place to start looking for a used car.

Like Cleveland and Columbus, Cincinnati is also a great place to go if you’re looking for a low average price on a used car. Its average monthly payment is about $20 less than what you’d find in Cleveland. But like any car, the final price is up to negotiation — and the availability of the vehicle you’re looking to buy.

The Hartford-New Haven area is the only state in the Northeast that makes the list. With an average used car price under $22,000, it’s definitely a steal in an otherwise pricey market.

Although these cities have decent prices for used cars, make sure it’s worth the time you will spend driving and visiting dealerships before you make a trip out. And get preapproved ahead of time for an auto loan so you know exactly how much you need to spend.

SHARE:
Written by Kellye Guinan
Read more from Kellye
Edited by
Rhys Subitch
Edited by Rhys Subitch Auto loans editor
Rhys has been editing and writing for Bankrate since late 2021. They are passionate about helping readers gain the confidence to take control of their finances by providing clear, well-researched information that breaks down otherwise complex topics into manageable bites.
Rhys Subitch
Auto loans editor 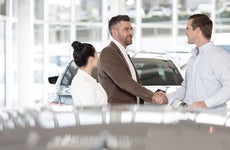 Can you return a car you just bought? 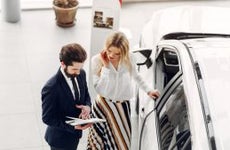 9 car leasing traps you should avoid 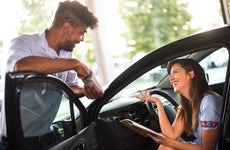 How much is the average down payment on a car?