Skip to Main Content
5 minute read Published June 22, 2022
Written by
Mia Taylor
Written by Mia Taylor Contributing Writer
Mia Taylor is a contributor to Bankrate and an award-winning journalist who has two decades of experience and worked as a staff reporter or contributor for some of the nation's leading newspapers and websites including The Atlanta Journal-Constitution, the San Diego Union-Tribune, TheStreet, MSN and Credit.com.
Mia Taylor
Edited by
Rhys Subitch
Edited by Rhys Subitch Auto loans editor
Rhys has been editing and writing for Bankrate since late 2021. They are passionate about helping readers gain the confidence to take control of their finances by providing clear, well-researched information that breaks down otherwise complex topics into manageable bites.
Rhys Subitch

Car buyers throughout the nation can experience the aftereffects of destructive floods by unknowingly purchasing water-damaged cars. New and used vehicles damaged by significant flood events, like Hurricane Ida in 2021, can find their way to the market in the aftermath of a storm. Carfax data shows that as many as 212,000 vehicles may have been damaged by Hurricane Ida. When flood-impacted cars are resold, unsuspecting buyers often face expensive mechanical and electrical problems that surface months later.

Even if you don’t live in a region where flooding is common you can still inadvertently purchase a car that has water damage. Carfax research also shows that water-damaged vehicles appear in every state, meaning buyers from coast to coast are at risk of purchasing a flood-damaged car.

How to tell if a car has water damage

Water-damaged cars can be hard to spot. They often look fine and may even run well for a little while. Eventually, however, you are likely to face problems as flooded cars rot from the inside out. Here are some of the signs that a car may have water damage:

If you suspect that a vehicle may have water or flood damage, it’s important to do your homework and find out whether your instincts are correct. There are many tools available to help you get to the bottom of this important question, as well as signs to be alert for.

Running a vehicle history report can help uncover issues with a car before you make a purchase. A clear sign of a water-damaged car is one that is branded as such. Departments of motor vehicles require permanent title marks for vehicles that have been badly damaged by floods. If the vehicle was declared totaled, it is supposed to be given a new title entirely that is labeled “salvage” or “flood.” Depending on the state, however, this fact may be indicated by a numeric code.

Carfax and Experian offer flood check tools that allow users to conduct a free check on the history of a car. These platforms simply require entering the VIN of the vehicle in question. When reviewing a car’s history, keep your eye out for vehicles originating from areas that have been affected by flooding. The National Insurance Crime Bureau also provides free online VIN checks that allow consumers to find out whether a car has been declared salvaged.

You will want to look at a vehicle’s history report for any sign that the car has changed hands several times over a short period of time. Be particularly leery of a history that involves buyers in multiple states. This could be a sign of what’s known as car “title washing,” where unscrupulous sellers retitle a car repeatedly to hide its history.

2. Check for signs of water damage

Cars that have been even partially submerged in water often have telltale signs, but they may be subtle, especially if the car has been cleaned up for resale. Pay attention to musty or moldy smells, including those coming from the climate control system.

Note any stains that appear on the car’s interior, engine compartment and trunk. Dirt, sand or mud in odd places and seat belts that sound gritty when they are pulled or retracted are also signs of water damage.

It’s also important to test drive a vehicle, especially one you think may have water or flood damage. Hints to watch out for during a test drive include compromised electrical systems and infotainment systems, which will act up if they have been impacted by water. You will also want to look for signs of smoke during your test drive.

3. Be wary of cars that are priced below market value

There’s a reason for the adage about things being too good to be true. This includes cars being priced well below their market value, which is often a red flag that something is wrong.

Check the typical selling price for the car you are considering buying on independent vehicle pricing sites such as Edmunds and Autotrader. A new or used car priced below market value is a strong indicator the seller is anxious to get rid of it.

Buyers should tread cautiously when a car is being listed for a significant discount. In addition to asking questions about why the car is being offered for much less than it should be, it may be a good idea to have the vehicle looked at by a professional who can identify any problems.

4. Get a professional inspection

It’s always a good idea to hire a certified mechanic or automotive technician to thoroughly look over a car before you buy it, but it’s even more critical to take this step in order to protect yourself from a possibly water-damaged car.

A professional can help ease your mind, especially if the car you are considering has one or more of the warning signs listed here. Be sure that the inspection not only includes obvious signs of water damage but also a thorough test of all the electronics equipment, as problems with these systems can take months to surface.

While a pre-purchase inspection will typically have to be paid for by you, the prospective buyer, it will be money well spent if it prevents you from ending up with a car that is a lemon. You can expect to spend from $100 to $200 for an inspection.

What to do if you bought a water-damaged car

If you’ve purchased a vehicle that has water damage all may not be lost. It is possible to repair the vehicle with an experienced mechanic. But remember, these are not do-it-yourself fixes. It will require a professional who has extensive knowledge of cars.

It’s also worth bearing in mind that repairing a flood-damaged vehicle will not be cheap, so you’ll want to determine whether the car is worth the investment. Especially since flood-damaged cars typically have no resale value.

Flood-damaged vehicles are in use in every state across this country. If you suspect a car may have been impacted by flooding or some other type of water event there are several steps to take including running a vehicle history report, looking for telltale signs of water damage and having the car inspected by a professional. Remember, even if you don’t live in an area impacted by flooding, you could unknowingly end up with a water damaged vehicle.

SHARE:
Written by Mia Taylor Contributing Writer
Read more from Mia
Mia Taylor is a contributor to Bankrate and an award-winning journalist who has two decades of experience and worked as a staff reporter or contributor for some of the nation's leading newspapers and websites including The Atlanta Journal-Constitution, the San Diego Union-Tribune, TheStreet, MSN and Credit.com.
Edited by
Rhys Subitch
Edited by Rhys Subitch Auto loans editor
Rhys has been editing and writing for Bankrate since late 2021. They are passionate about helping readers gain the confidence to take control of their finances by providing clear, well-researched information that breaks down otherwise complex topics into manageable bites.
Rhys Subitch
Auto loans editor 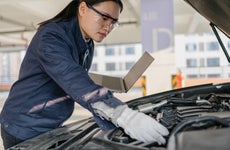 Get an inspection before buying a used car 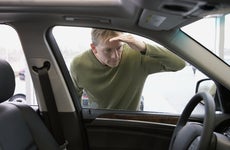 How to tell if you’re buying a stolen car 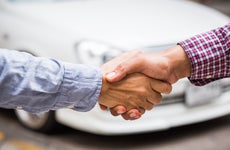 How do you buy a car from a private owner? 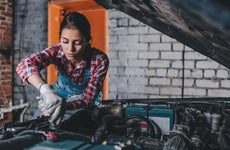 How to navigate used car recalls