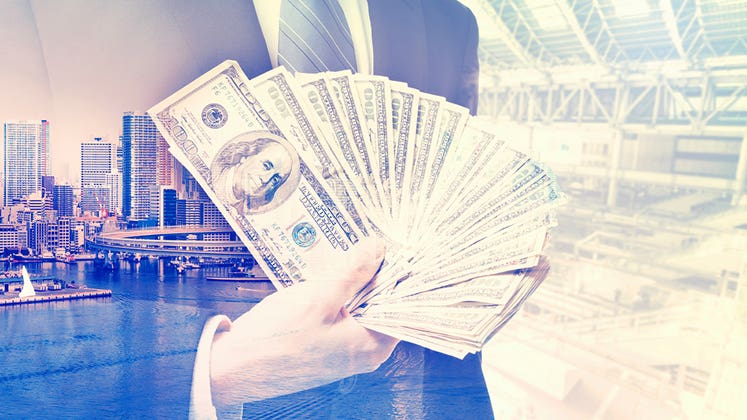 Over the past decade, terrible interest rates on deposits have made savings accounts about as profitable as a career in VCR repair or Beanie Baby collecting.

Fortunately, there is one way to earn a significant return from your bank account, as long as you’re willing to put in a lot of legwork: investing in mutual bank conversions.

A bank that is owned by its members, as opposed to a conventional bank, which is owned by shareholders. Profits from mutual banks are typically returned to members in the form of lower rates on loans and higher rates on deposits.

They can do this for a variety of reasons, says Robert Clark, senior analyst for SNL Financial.

Whatever the reason, mutual bank conversions create an opportunity for depositors, who get the chance to purchase shares in the new bank before they go on sale to the general public.

“It’s like an option — it’s not something you’re required to do,” Clark says. “If you think that it looks like a good deal and you would be comfortable holding stock, knowing that there’s no guarantee that the stock will appreciate, you can participate in the offering.”

That’s something of a unique opportunity for individual investors, says Clark. Usually when an initial public offering is “oversubscribed,” meaning investors want to buy more shares than are available, large investment banks and hedge funds snap them up, leaving little or nothing for individual investors. But in mutual fund conversions, members get to be at the front of the line.

Not much downside for investors

It’s hard to see a downside for conversion investors: They get to keep their money insured by the Federal Deposit Insurance Corp. and earning interest, like at any other bank, along with a chance to earn a higher, 1-time return.

While he’s careful to note that nothing’s guaranteed, Scott Hein, Robert C. Brown chairman in finance at Texas Tech University, says that getting in on the ground floor of a mutual-to-stock conversion typically is pretty lucrative.

“On the initial public offering, it’s frequently the case that stock appreciates markedly on the 1st day of trading,” Hein says. “I think we see something similar on mutual conversions as well, so those people that are original investors do get a pop in their return immediately.”

First-day returns for stockholders in these public offerings average 10% to 15% historically, Clark says.

The right place at the right time

The combination of relatively high returns and low risk in mutual bank conversions has proven so attractive that there are some investors willing to do the legwork involved in seeking out mutual banks that may soon convert in hopes of getting in on the action.

“There are investors who try to open up as many deposit accounts in mutual (banks) as possible,” Clark says. “It’s a small group of people, but some of them actually have a couple of hundred accounts.”

For these investors, the Holy Grail is a mutual bank that converts to a stock bank and is then acquired by another, larger company after the 3-year waiting period required by law, he says. 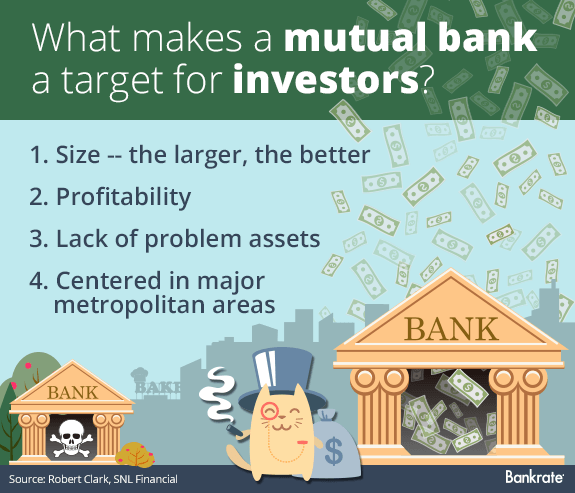 Once they locate a suitable target, investors typically stash into the bank the minimum amount of savings needed to qualify as a bona fide member. Then they watch and wait.

In the meantime, they enjoy the usual benefits of a savings account — liquidity, safety and a (quite small these days) guaranteed return.

“There is an element of safety that you don’t see elsewhere,” Clark says.

Perhaps in order to discourage this type of profiteering, mutual banks sometimes impose rules on which depositors are eligible to participate, says Clark. For instance, the bank may require a depositor to have been a member for more than a year or reach a certain threshold in deposits.

“Deposit amounts could determine how much stock you end up getting allocated if the offering is oversubscribed,” Clark says. “Sometimes you may need $5,000 to get a full allocation of shares. You may need $100,000.”

Mutual banks may also require depositors to reside in a certain city or county.

While mutual bank conversion investing has always been kind of an oddball investment class, it’s gotten somewhat less common for 1 reason: There are fewer mutual banks left for investors to target.

There are only 509 mutual banks in the U.S., Clark says, and since the beginning of 2012, just 45 mutual banks or mutual bank holding companies have converted to stock banks nationwide.

“Conversion activity has slowed. In terms of the number of conversions per year, it peaked in the mid-’90s, and it’s just gradually gotten slower since,” he says.

Activity picked up before the financial crisis, but then returned to a general downward trend, Clark says. One big reason for the slowdown: Few new mutual banks are coming online. The exception is when credit unions “flip” and become mutual savings banks, Clark says, and that’s a relatively rare event.

“It’s constantly dwindling because the pipeline is not getting replenished,” Clark says.