Why LeBron gets a Social Security tax break 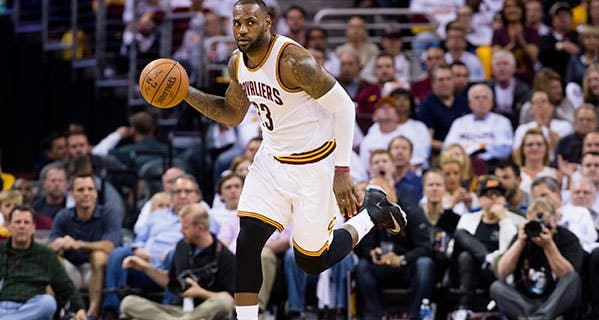 LeBron James is not only one of the world’s best and most famous basketball players. He seems to always find his way into tax conversations.

When he left his hometown Cleveland Cavaliers in 2010 to join the Miami Heat, many speculated that Florida‘s lack of an income tax was a factor in King James’ move. If so, he apparently socked away enough during those years in South Florida to cover his 2014 return to Ohio‘s NBA team.

Now James, whose Cavaliers have an early lead in the second round of NBA playoffs against the Atlanta Hawks, is being invoked as a reason to raise the earnings cap on Social Security taxes.

James “stops paying his Social Security taxes at the beginning of the second quarter of the first game of the season,” according to Rep. Alan Grayson, a candidate to replace retiring Sen. Marco Rubio in the U.S. Senate.

I agree with Grayson. The limit on earnings that are subject to Social Security payroll taxes is way too low.

The payroll tax, which most folks see listed on their paycheck stubs as FICA, short for Federal Insurance Contributions Act, is 6.2%. That same percentage is matched by the workers’ employers, with all the money going toward the federal retirement benefits program.

That means that the most a salaried worker will be required to pay into Social Security this year is $7,347.

Most of us will pay the Social Security tax on all our earnings because we never hit the earnings cap, which is adjusted for inflation each year.

But for folks like LeBron and his NBA colleagues, as well as other professional athletes and entertainment stars, that 7 grand is negligible. It’s only a minuscule amount of the millions, and sometimes billions, they pocket every single year.

Easy way to save Social Security

Right now, the Social Security Board of Trustees projects that unless changes are made to the system, by 2035 the current taxes will be enough to pay for only 75% of scheduled benefits.

The idea of eliminating or at least increasing the FICA payroll tax earnings limit has been proposed on Capitol Hill periodically. However, it never gets much traction.

Part of the reason is the general opposition to raising any taxes. But that’s a specious argument. Folks making the kind of money James and his ilk rake in aren’t going to miss a few more Social Security dollars, especially if the limit were simply doubled.

Businesses, of course, balk at the increase, since they would have to match the added FICA taxes. But again, in most cases businesses can deduct their portion of the tax payments as a business expense.

Will a new president be able to successfully counter those anti-tax arguments? Maybe.

Democratic hopefuls support changes to the payroll tax cap. Sen. Bernie Sanders of Vermont wants the limit raised to $250,000. Former Secretary of State Hillary Clinton has indicated a willingness to bump up the cap, but has not cited a specific amount. The issue isn’t addressed by Republican front runner Donald Trump.

I suspect, however, that there will be no change in the Social Security tax limit or other program tweaks made until we get closer to 2035 and the program’s fiscal concerns are more immediately real. Adjust your personal retirement savings plans accordingly.