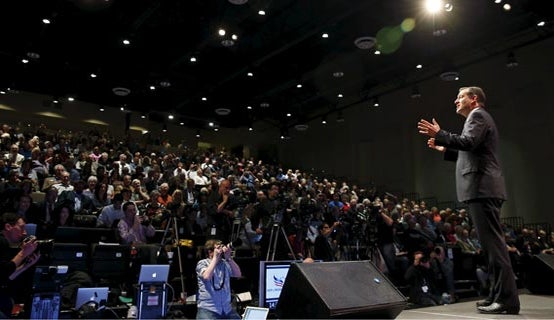 The 2016 presidential campaign is well under way. I know, I can hear your groaning through the Internet. To borrow a campaign catchphrase, I feel your pain.

As I type, six Republicans are seeking their party’s nomination. But by the time you read this, a couple of more candidates may have declared. The Democrats so far have just two official candidates.

But you can bet every one of the men and women looking to be the next Oval Office occupant have learned from the ill-fated run by Mitt Romney. And they will be working on tax plans that will appeal to his demographic, as well as to us regular voters.

Most political analysts say Romney’s wealth, and his secretly taped comments about the 47 percent of lower-paid Americans he described as taking too much in government services, were a major factor in his loss. Today’s 2016 candidates instead are seeking to woo that voting segment.

Despite the very healthy bank balances of most candidates from both parties, they want to make sure that we know they are, in their hearts of hearts, just regular folks, too. That means lots of stump speeches about too-high taxes.

But the candidates can’t forget those who are a bit nearer Romney’s income level.

Rich pay the most taxes

The Pew study found that although individuals with adjusted gross incomes of more than $250,000 accounted for only 2.4 percent of all federal tax returns filed, they paid nearly half (48.9 percent) of all individual income taxes. Their average tax rate (total taxes paid divided by cumulative AGI) was almost 26 percent.

At the other end of the income scale, Pew found that people whose incomes were less than $50,000 accounted for 63.4 percent of all individual income tax returns filed in 2013. All those forms, however, amounted to just 6.2 percent of total taxes, with an average tax rate of 4.2 percent.

The 2016 presidential candidates will have to walk a fine line to attract more voters in lower tax brackets without alienating higher earners who are contributing the lion’s share in taxes to the U.S. Treasury. During the last campaign, the rich did indeed favor Romney.

Look for each candidate to put out their own tax plans and for the details to be topics in the upcoming debates. The White House wannabes also might get some help from the current Congress, which continues to make noise about changes that could simplify the current tax system.

But remember, what is promised in on the campaign trail doesn’t always translate to real-life laws.

Will tax proposals play a major role in which presidential candidate you’ll support?

See which tax proposals made it into President Barack Obama’s fiscal year 2016 budget.