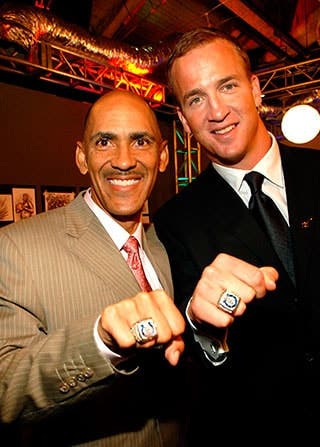 To the victor of the Super Bowl go the spoils, or rather, the bling.

Later this year, the Denver Broncos players, coaches and other team members will get their championship rings. Over the years, the size and cost of the rings have grown.

Big rings for the big win

My Bankrate colleague Judy Martel reports that the NFL gives teams an allowance of $5,000 per ring for up to 150 rings. Just 5 grand? Get real.

Teams can and usually do spend more on the rings. Each ring presented to the 2015 NFL champion New England Patriots contained 4.85 carats worth of diamonds and cost $36,500 apiece, the most expensive ever produced by Jostens, according to ESPN.

Will the Broncos out-do that for what is likely Peyton Manning’s final piece of championship football jewelry? We’ll just have to wait and see.

But one thing we already know for sure is that the Denver team members who get a ring also will get a tax bill.

The value of the ring is supposed to be listed as a taxable fringe benefit on the player’s W-2, says K. Sean Packard, a CPA who specializes in athlete tax planning as director of tax at the wealth management firm Octagon Financial Services in McLean, Virginia.

Packard says when he’s working with an NFL player, he usually figures around $25,000 as the taxable ring amount. “I haven’t had a Super Bowl winner in a few years though, and they keep getting bigger,” he says.

And while I’m sure every championship player hates paying the extra tax, there’s no way any of them will turn down one of those showy rings.