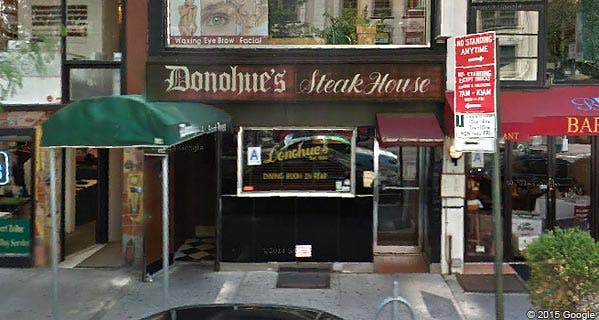 When does a server appreciate not getting a big tip? When that gratuity is delivered later as a bequest in a will.

Robert Ellsworth, a wealthy Big Apple art collector, regularly dined at Donohue’s Steak House not far from his apartment. He also was a generous tipper, according to wait staff there, typically leaving 20 percent of every meal’s bill for the staff.

When Ellsworth’s will was revealed this week (he died at age 85 last August), it underscored his reputation for appreciating good service. He left two Donohue’s waitresses $50,000 each.

Ellsworth didn’t know the women’s full names. He referred to them in his will as “Maureen-at-Donohue’s” and “Maureen-at-Donohue’s Niece Maureen.” It was easy, however, for the estate executors to track down Maureen Donohue-Peters, daughter of the restaurant’s founder, and Maureen Barrie.

The two women were surprised. “I just couldn’t believe it. I didn’t expect anything,” Donohue-Peters told the New York Post.

The pair also should be very grateful that Ellsworth decided to deliver his biggest tips posthumously.

Tales of waitresses getting extraordinary tips — and yes, it tends to be female servers who get the huge gratuities — show up now and then. They are great feel-good stories underscoring the hope that we really do care about each other.

But the downside of those tips left on restaurant tables across the country is that they are income. That means the servers who receive them must pay taxes on the tips.

The Donohue’s waitresses, however, don’t have to share their respective $50,000 bequests with either the Internal Revenue Service or the New York Department of Taxation and Finance.

Neither the IRS nor New York State collects an inheritance tax. Gifts, cash or property distributed post-death are tax-free to the recipients.

I’m pretty sure that Ellsworth wasn’t thinking about the tax implications of his gift to the Donohue’s staff. He just wanted to ensure he left them a final tip. It’s just great tax serendipity that he did so in such a tax-generous way.

A will is just one part of a solid estate plan. You need one regardless of how wealthy, or not, you are; in some cases a do-it-yourself will works fine.