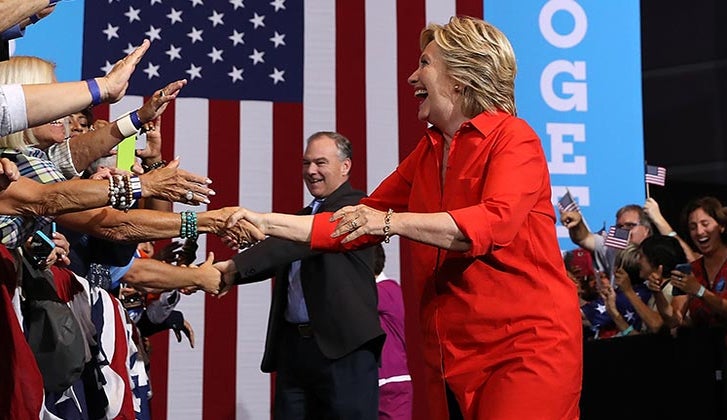 They also, no surprise, took the opportunity to call out Donald J. Trump, the Republican candidate, for refusing to let the public see any of his tax filings. Trump continues to say he won’t reveal what’s on his 1040s because they are under Internal Revenue Service audit.

The latest in a long tax return line

Clinton, however, has not been shy about showing the American electorate what she and her husband Bill put on their jointly filed taxes. The 2015 tax return posted on her campaign website appears along with the Clintons’ filings since 2007.

For the 2015 tax year, Hillary and Bill Clinton reported adjusted gross income of $10.6 million and a tax bill of $3.6 million. That comes to an effective federal tax rate of around 34%.

Kaine and his wife also joined the tax data dump. The Virginia couple’s 2015 filing was part of 10 years of tax returns they also posted to the campaign website. The Kaines paid an effective rate of 20% last year on $313,000 in income.

The Clintons, like millions of Americans, are self-employed. That means they report their earnings from various sources on Schedule Cs they attach to their jointly filed Form 1040.

The bulk of their self-employment earnings came from Bill’s speaking fees, which were around $5.25 million in 2015. He also reported $1.58 million in consulting fees.

Hillary’s speaking fees, a hot button issue pushed repeatedly by her opponents and critics in this presidential campaign season, came in 2015 to $1.48 million, which her travel and other business expenses reduced to a taxable $1.12 million.

She also got another $3 million from ZFS Holdings LLC. This is the limited liability company incorporated in Delaware in 2013 after she left the State Department to receive her speaking fees and book royalties.

Like most U.S. taxpayers, the Clintons used deductions to help lower their ultimate tax bill.

The Clintons’ itemized deductions helped cut their AGI to the lower taxable income amount of $8.35 million.

Their Schedule A deductions included just more than $1 million in charitable donations. The bulk of the couple’s philanthropic gifts went, of course, to the Clinton Family Foundation.

They also got to write off those previously mentioned New York taxes that they paid.

However, they didn’t get to claim their total Schedule A amount. It came to just more than $2.5 million. Because of their income, that itemized deduction amount was reduced to $2.2 million. This is known as the Pease limitation and was included as part of the so-called fiscal cliff tax bill enacted in early 2013.

And the couple also faced 2 of the tax bills imposed on high-income earners, the Net Investment Income Tax (NIIT) and the additional Medicare tax.

Like millions of Americans, the Clintons overpaid their tax bill last year.

Their total tax liability for 2015 was $3.6 million. But they paid estimated taxes, along with some nominal withholding, of $4.67 million. That means they’re due a refund of just more than $1 million.

But they won’t be getting that million or so from Uncle Sam. Instead, the Clintons told the IRS to apply it all to their 2016 estimated tax bill.

How many of the Clintons’ tax-filing maneuvers have you used on your returns?