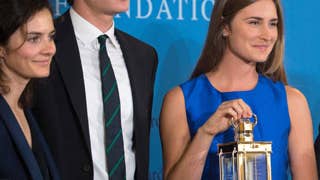 That was the sound bite of the 1988 Republican National Convention when President George H.W. Bush accepted his party’s nomination. Bush’s broken tax promise also is cited as the main reason for his failed re-election bid in 1992 to Democratic candidate Bill Clinton.

It did, however, earn him kudos from the John F. Kennedy Library Foundation.

The nonprofit’s annual Profiles in Courage Award this year went to the 41st president because of, according to the Foundation, Bush’s “decision to put country above party and political prospects” in the tax-hike deal with congressional Democrats.

“America’s gain was President Bush’s loss,” Jack Schlossberg said during the awards ceremony at the John F. Kennedy Presidential Library and Museum in Boston. Schlossberg is a JFK grandson and a member of the award committee.

“Candidly speaking, my grandfather did not want to raise taxes in 1990,” said Lauren Bush Lauren, who attended the ceremony and accepted the award on her grandfather’s behalf.  “But in our constitutional system of governance, Congress also gets a say. And more than that, he felt he owed the American people action and results.”

Note this year’s award. A similar one won’t be handed out anytime soon.

Given the political atmosphere today on Capitol Hill, few politicians want to cut deals, tax or otherwise, with the other side.

Even fewer want to utter the truth about taxes, which is the fact that we need them, and sometimes need to raise them, to pay for services everyone uses and wants.

Sure, taxes will be part of deals, but only after all other options are exhausted and, based on recent congressional recalcitrance, after we face near-catastrophic events such as government shutdowns.

I was working in Washington, D.C., during the Bush 41 years and watched the 1990 budget and tax negotiations closely. I wasn’t a fan of Bush 41, but I respect the hard decision he made in accepting that compromise and especially why he made it. So congratulations, Poppy Bush, and thanks for putting your country above your politics.

Maybe one day we will again elect candidates who think that way.