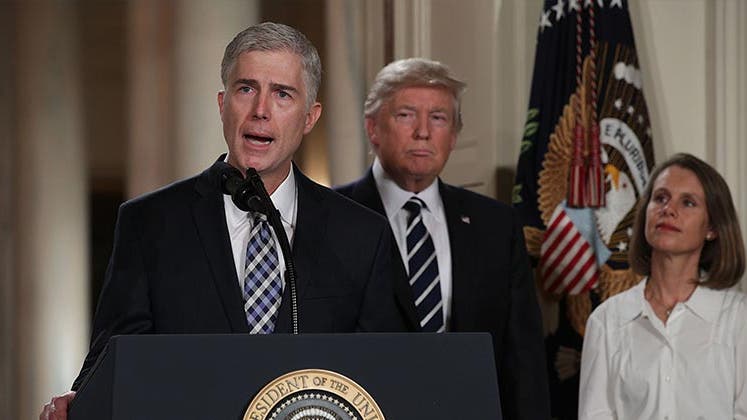 President Donald Trump’s first Supreme Court pick has been identified as the “most natural successor” to the late Justice Antonin Scalia, whom he would replace.

Neil Gorsuch, 49, a judge on the 10th Circuit Court of Appeals in Denver, is said to share many of Scalia’s beliefs and his judicial philosophy. That could tip the high court back toward the 5-4 conservative split it held during controversial cases prior to Scalia’s death, although Justice Anthony Kennedy will remain a liberal swing vote on certain social issues before the court.

Gorsuch’s big judicial decisions have favored religious freedom over government regulation and state’s rights over the power of the federal government.

But how might that impact consumers or their wallets directly?

“I think with a judge like Gorsuch, you can see there probably will be a tendency in that direction to dissuade innovation,” says David Reiss, a law professor at Brooklyn Law School and the academic program director for the Center for Urban Business Entrepreneurship.

That could mean the Consumer Financial Protection Bureau, whose unique management structure a judge on the U.S. Court of Appeals for the D.C. Circuit last fall called unconstitutional, could face an obstacle on the bench should the legal fight over its construction ever reach the Supreme Court.

Judge Brett Kavanaugh, who wrote the majority opinion for the D.C. circuit panel, said because this independent agency is headed by a director whom the president cannot fire at will – and not, say, a set of commissioners like other agencies within the government – it is a threat to individual liberty.

“In short, when measured in terms of unilateral power, the director of the CFPB is the single most powerful official in the entire U.S. government, other than the president,” Kavanaugh wrote. “In essence, the director is the president of consumer finance.”

How Gorsuch may rule

Supporters of the bureau are trying to get a hearing before the full U.S. Court of Appeals, but the issue could well wind up in front of the U.S. Supreme Court – that is if Congress doesn’t take action first.

Legal scholars say should Gorsuch win Senate confirmation he is unlikely to look favorably on the bureau’s structure.

“Judge Gorsuch, through recent decisions, has expressed his disfavor with permitting government agencies to not only determine what the law is, but also to interpret and re-interpret the law as they see fit, often based on the political climate,” Malpass says.

CARD SEARCH: Credit card rates are on the rise. Consolidate now with a low-interest balance transfer.

If the Supreme Court were to uphold the Kavanaugh ruling, it “may, in effect, destroy the CFPB as we know it, and that will have an effect on consumers,” Reiss says.

Not everyone, though, thinks restructuring the CFPB as a commission-led agency like the Federal Communications Commission, for example, would be bad for consumers.

.@BrianRKnight: Turning the CFPB into a commission would provide accountability & insulation from knee-jerk politics https://t.co/WWm3OmNoso

Gorsuch’s path to the high court

Democrats, still stung over the Senate’s refusal to consider Merrick Garland, then-President Barack Obama’s pick to succeed Scalia, could try to block Gorsuch’s nomination. Under current Senate rules, at least eight Democrats will need to cross the aisle to prevent a filibuster of the appointment.

Gorsuch, who was confirmed for his current post in 2006 by Senate voice vote, has won widespread acclaim in Republican circles. He also received a vote of confidence from a former Obama administration official.

“I think the Democrats are going to ask questions to determine if the nominee is outside what they call the political mainstream,” Reiss says. “We know this battle will be a brutal one, almost definitely because of the treatment of Merrick Garland’s nomination under the Obama administration.”