Dear Tax Talk,
I held some Series HH bonds jointly with my mother. When she passed away, the bonds became mine. I have since cashed them. Will I be responsible for the interest the bonds made while I had them? Will I have to pay taxes on the original investment even though they were originally under my mother’s Social Security number? Did she have to pay the taxes on the Series EE bonds before she rolled them into the HH bonds?
— June

Dear June,
If I understand correctly, you and your mom jointly held Series HH bonds, which mom obtained by converting EE bonds that you did not own jointly. After your mom died, you cashed the HH bonds.

Series HH bonds pay interest semiannually, so the interest earned since your mom’s death would clearly be taxable to you.

Upon death of one of two people named in a bond’s registration, any surviving person named on bonds as co-owner or beneficiary becomes the new owner. As the new owner, this person is required to include, on his or her tax return, the interest earned on the bonds for the year the bonds are redeemed. Also, whoever files the deceased person’s final, individual, federal income tax return for the year that person died has the option of reporting all interest earned on the bonds up to the date of death. 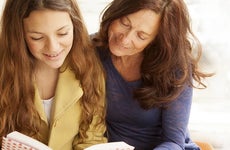 No tax break for savings bond