5 sweet ways to save money on a cheap date 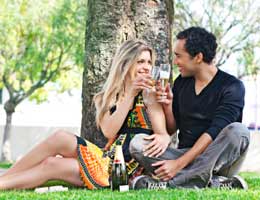 People on a blind date and longtime married couples alike are finding ways to date for less. In fact, having a frugal mindset could save money while helping you make a positive impression.

“They’re not (avoiding) dating anymore because of money; they’re just doing some clever and some inventive things,” says Whitney Casey, author of “The Man Plan” and a contributor to online dating site Match.com. “It’s cool to be frugal in a recession.”

Cheap and even free dates can be just as memorable, without taking a big chunk out of your paycheck or creating credit card debt.

There’s no evidence of a correlation between how much money you spend on a date and the kind of memory that’s created, says Jeff Yeager, an author based in Maryland whose books include “The Cheapskate Next Door.”

“Never hide or be shy about your attitude toward money, even when you’re first dating,” he says. 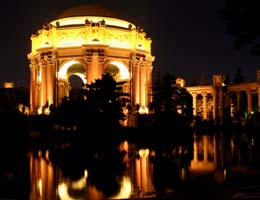 Authors, including celebrities, best-selling writers and debut novelists, often are scheduled as guest speakers at bookstores, libraries or a local college campus. Make their lectures a date and save money.

Or, plan a date around free days offered weekly, monthly or annually at museums. If it’s a favorite museum, becoming a member would allow you to visit for free and attend special events.

Getting out and about might take you to a festival. Events such as an apple festival in the fall to a springtime garden tour are often free, so check your state’s and city’s tourism website for the calendar. And when the temperatures are warm, there are free outdoor movies and concerts hosted by communities, park departments, schools and religious organizations. 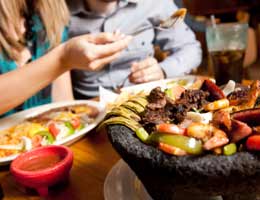 Restaurant coupons are an option, but check the expiration dates and other possible exclusions to be sure they are valid when the bill arrives.

Another way to save money when eating out is to select a restaurant offering buy-one-get-one-free specials on certain nights. Or, plan a date during hours when items such as appetizers are half-priced. A third option is trying a less-expensive meal, such as breakfast, at a trendy restaurant.

“If you’re willing to do something a little different, that’s when you save a lot of money,” says Lynnae McCoy, a wife and mother of two who blogs about frugal lifestyles at beingfrugal.net. To avoid the high cost of alcoholic beverages, go to a BYOB restaurant or forgo cocktails altogether.

If you’re trying a romantic picnic, don’t resort to the PB&J. Yeager says hit up a grocery store or gourmet shop that discounts its food bar after a certain time of day and fill up your basket. 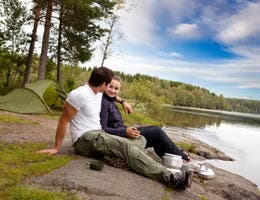 Attend free exercise and yoga classes year-round at fitness centers, community parks or recreation centers, and through local personal trainers. Apparel companies such as lululemon athletica make it easy for people to search at lululemon.com for a local gym or trainer offering complimentary classes. As the temperatures fall, look to cold-weather activities such as camping, hiking and skiing.

In the spring, try an activity you both enjoy, such as gardening, or head out in a canoe for a calming day on the water. Activities where you can act as partners and don’t have to keep up with each other are best. “You want to be in the same boat, literally and metaphorically,” Casey says.

Exchanging baby-sitting duties with other parents can help you save money that can go toward paying to see that new romantic flick or celebrate a special occasion with a dinner out. It’s something that some parents do once a month for some alone time. You baby-sit your friends’ kids for free one week, then you get to go out the next week.

“One of the first things to go out the window sometimes when you have kids and don’t have a lot of money is going out once a week,” McCoy says. “It costs a lot when you’re paying a baby sitter, and for dinner and a movie. People are looking for ways to connect with their spouse that don’t cost a lot of money.” 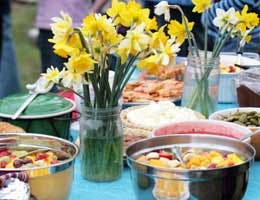 Married or longtime couples double date or bring together groups of friends weekly, monthly or whenever they have free time by scheduling a night at one of their homes. Instead of one couple preparing a gourmet meal, plan a potluck-style dinner, themed around “breakfast for dinner” or a certain culinary style to save money.

“That’s a great way to split up the expenses,” says McCoy. Play games or watch a favorite movie or TV series you already own on DVD and want your friends to enjoy. If there’s a recent movie everyone is dying to see, check it out at the library for free (try to reserve it online ahead of time).

“We’re thankfully well past the day when it’s considered awkward or inappropriate to discuss the cost of going out versus the cost of dining in, or having a potluck,” Yeager says. 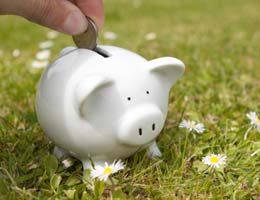