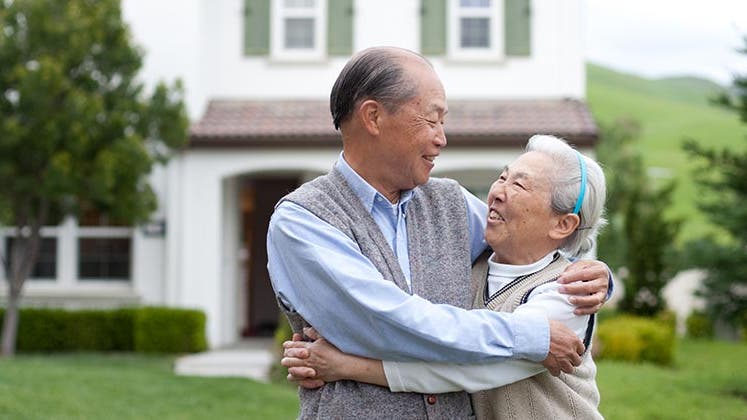 If you’re an older homeowner and are ready to say goodbye to mortgage payments, you might consider letting your home’s equity finish off your loan.

A reverse mortgage would allow you to tap your equity to pay off your traditional mortgage.

When used appropriately, reverse mortgages can be a useful financial tool for seniors, says David Johnson, an associate professor of finance at the Maryville University in St. Louis.

A home equity loan in which the borrower is not required to make payments. The homeowner must be at least 62 years old. The loan accrues interest and doesn’t have to be repaid until the homeowner dies or moves out of the house. The Federal Housing Administration, or FHA, calls a reverse mortgage a HECM, for home equity conversion mortgage.

No longer a ‘last resort’

“It was viewed as a last resort, and they assumed that the only people that do reverse mortgages are people that are desperate,” he says. “Clearly that’s not the case, and I think they are starting to view it differently now.”

Curious about reverse mortgages? Find a financial adviser to help you make the right decision.

Why get another loan?

One of the most common reasons homeowners get a reverse mortgage is to pay off their existing mortgage so they have more income to work with, says Maggie O’Connell, who runs ReverseMortgageStore.com.

“They already have this debt on the house, so instead of making their mortgage payments, they are just paying it out of their equity before they leave the home,” she says.

What it takes to get a reverse mortgage

To qualify for a reverse mortgage, the homeowner must be at least 62 years old and have sufficient equity in the house. The size of the loan depends on the value of the home, the age of the youngest borrower and how much is owed on the house. The owner must pay property taxes and insurance.

2 examples of paying off a mortgage with a reverse mortgage

Based on their ages and the home’s value, they can get a reverse mortgage for up to about $90,800. This is known as the principal limit or maximum loan amount. Closing costs, including FHA initial mortgage insurance, reduce that available amount to about $80,570.

Based on her age and the home’s value, she can get a reverse mortgage for up to about $213,200 (the principal limit). Closing costs, including FHA initial mortgage insurance, reduce the available amount to around $196,400.

Under FHA rules, she can get a reverse mortgage, pay off the HELOC balance and take out up to around $86,150 in cash during the first year. A year later, the remainder would be available to her.

How equity is cashed out

With reverse mortgages, homeowners have three options for cashing out equity:

Many homeowners are conservative and want to eliminate their mortgage payments, but they also like having the credit line available, says Beth Paterson, executive vice president of Reverse Mortgages SIDAC in St. Paul, Minnesota.

“Maybe they don’t need the money right now, but down the line they might have a medical emergency, so it’s good for them to have the option,” she says.

Maybe they don’t need the money right now, but down the line they might have a medical emergency, so it’s good for them to have the option.

That was the case with Barbara Hiebert after her husband died. Their house was mortgage-free, but she knew her retirement income wasn’t enough to cover some of her expenses, including medical emergencies. She decided to get a reverse mortgage and didn’t access the money until she had no other option.

She was grateful to have the funds at her disposal when she fell and faced costs of more than $10,000 during her at-home recovery.

“I had people come in for three hours in the morning and at night,” she says. “It was expensive. I couldn’t have afforded it without the reverse mortgage.”

The name stays on the title

Some seniors are confused about the process and worry that once they get a reverse mortgage, they’ll no longer own the house, Professor Johnson says.

“After they get a reverse mortgage, they still have title,” he says. “They can still do anything they want.”

If the house sells for more than the amount owed, the heirs receive the remaining balance. If the loan balance is bigger than the home’s value, the bank takes all the proceeds, but the balance of the loan does not have to be repaid.

Costs of getting a reverse mortgage

One of the common fears about reverse mortgages is that they are too costly, but they are no more expensive than conventional mortgages, says Peter Bell, president and CEO of the National Reverse Mortgage Lenders Association.

“It’s still going to be accruing interest on the house the same way as a conventional mortgage,” he says. “The question is whether you are going to be making those monthly payments now or let that be paid off later.”

Know the pros and cons

Because the homeowner isn’t making monthly payments to cover upfront costs, interest and mortgage insurance, the equity in the house can quickly shrink as the loan balance grows over time.

It’s crucial that seniors receive the required counseling before getting a reverse mortgage.

“For consumers, the most important thing they can do is to become educated on how it works,” says Johnson. “A reverse mortgage is not the solution for everybody, but clearly it’s an option for many people, and the more information they know, the better they can understand how the product works and they can make an informed decision.”