For one night each year, neighborhoods across the country (and the world) fill with ghosts, goblins, superheroes and other astounding creatures and sights to celebrate one of the world’s oldest holidays — Halloween. Kids and families take to the streets dressed up as their favorite characters in search of the finest candies and spookiest happenings. Decorations and carved pumpkins grace doorways and windows, providing light to evening festivities.

This year, Halloween occurs on Monday, Oct. 31, 2022. America continues to rebound from shutdowns and disruptions, including a return to regular Halloween traditions and spending. COVID-19 put a halt to many Americans’ holiday spending habits, but as the country continues to become more open, there’s a chance that Halloween spending will return to normal too.

The cost of Halloween

Kids love to dress up like their favorite characters and creatures and fill their bags and bins with bite-sized candy bars and other treats. Parents celebrate the holiday, too, but also foot the bill for Halloween festivities.

Consider all of the possible costs associated with Halloween depending on how festive you want to get. Costumes are one of the primary costs, especially if you have kids. If you prefer to open your doorway to neighborhood kids, you need to buy enough candy to keep your bowl filled all night. There are also pumpkins, indoor and outdoor decorations, lights and more. Throwing a Halloween party means more costs like food, drinks and other fun.

Americans don’t just spend money on Halloween. They also spend time participating in various activities and preparing for trick-or-treating and other festivities. Here’s a look at how Americans plan to celebrate Halloween this fall.

According to the National Retail Federation (NRF), total Halloween spending in the U.S. is expected to reach $10.6 billion in 2022, topping last year’s record of $10.1 billion. The increased spending is likely due to consumer participation returning to pre-pandemic levels, with 69 percent of American consumers planning on participating in Halloween festivities this year.

In 2021, consumers spent an average of $103 on Halloween candy alone. This year will likely fall just under that amount at $100 per consumer, according to NRF data. Unsurprisingly, costumes account for a good portion of consumer spending for Halloween. Spending on kids’ and adult costumes is expected to be $2.9 billion in 2022 — the highest amount since 2017.

While Halloween can rack up a significant bill depending on how intricate and spooky your decorations are, or how elaborate your children’s costumes end up being, it isn’t the most expensive holiday based on consumer spending. The following table compares Halloween with other widely celebrated holidays throughout the year:

How much do Halloween costumes cost?

Americans spent $3.3 billion on Halloween costumes for kids, adults and pets in 2021. This year, spending on costumes is expected to increase to $3.6 billion, with households spending an average of $33.75 each this fall.

It’s exciting to get dressed up for Halloween, but half the fun lies in choosing a costume. Whether or not you’re dressing up as your favorite trending character from this year’s box office or picking a class character you look up to, duplicating a costume can cost a pretty penny. And let’s face it, the opportunities are endless — even for our furry friends. According to the NRF’s recent survey, the top costumes for 2022 are:

Spiderman is the most popular costume choice for children, with over 2.2 million kids planning to dress up as the web slinger. Adults prefer traditional costumes, with 5.3 million adults planning to dress like witches. And for pet owners who love to dress up their furry friends, 9 percent plan to dress their pets up as pumpkins this year.

The cost of candy

It wouldn’t be Halloween without massive amounts of candy to fill plastic jack-o-lanterns, pillowcases and children’s (and parents’) bellies. Americans are expected to spend $3.1 billion on Halloween candy this year for an average of $29.51 per household.

Of course, everyone has their favorite Halloween candy of choice. As a parent, I’ve enjoyed my fair share of the spoils from my kids’ trick-or-treating adventures. I have my favorites too.

As with most surveys, we can debate which candy reigns supreme at Halloween.

The cost of Halloween decorations

The cost of pumpkins

Pumpkins are synonymous with Halloween. Americans have been carving pumpkins as far back as the 1800s. Now, pumpkins are a part of American home decor, lighting up porches and windows across the country.

USDA data shows that the average retail cost of pumpkins in the fall of 2021 was $4.98. With 44 percent of consumers planning to carve pumpkins this year, it’s one of the most popular Halloween activities among Americans.

Pumpkins come in all shapes and sizes. Choosing the right one depends on your personal preference, but the following tips from Home Depot will help you find one that will last:

Keep in mind, pumpkins typically start to decay within two to three weeks (or within a few days) once carved.

How to keep Halloween costs low

There’s no rule that says you must spend a lot of money on Halloween. Despite rising costs in many spending categories, there are ways to save money this Halloween.

Whether you like to build your costume from scratch with second-hand materials or deck your entire house out so it’s the spookiest one on the block, Halloween can be a fairly costly holiday — but it doesn’t have to be. If you are planning to drop some money this Halloween, maximize your return by using a rewards credit card or take advantage of a BNPL offer. Just keep in mind that any time you utilize financing of any kind, it is important to have a plan. Happy Halloween!

SHARE:
Written by Kevin Payne Travel Rewards Expert Contributor
Read more from Kevin
Kevin Payne is a freelance writer focused on the personal finance and travel spaces. He frequently writes about credit cards, banking, student loans, insurance, travel rewards and more. He is also the personal finance expert behind Family Money Adventure, where he regularly shares practical advice on managing family finances and traveling with a family.
Edited by
Liliana Hall
Edited by Liliana Hall Associate Editor
Liliana is an editor and journalist with a background in feature writing on the Bankrate Credit Cards team.
Liliana Hall
Associate Editor 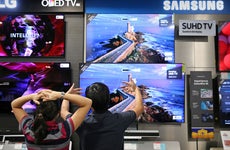 What to buy in November: From Black Friday doorbusters to holiday toys 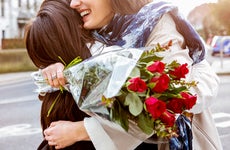 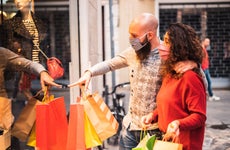 The average cost of Christmas: Gifts, food, decorations and more 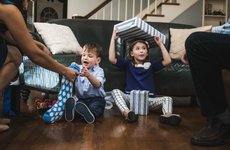 Holiday cost statistics in 2022: What you can expect to spend