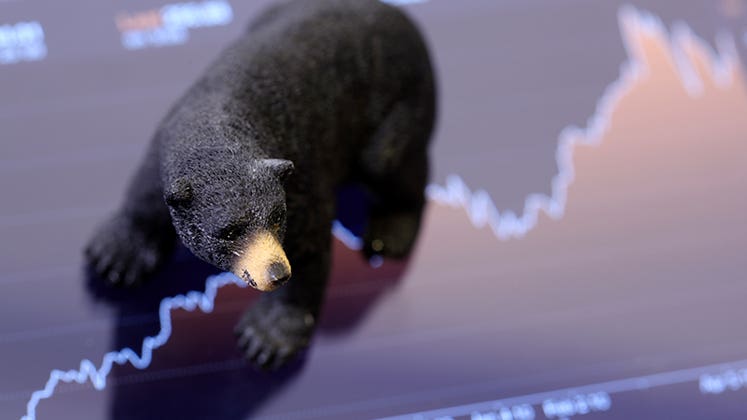 One of the biggest risks to your retirement is facing a bear market during the early years after you stop working. If you must sell stocks in a falling market, you risk depleting your nest egg at exactly the moment you need it — leaving you with too little savings to cover your needs for your retirement.

If you withdraw regular amounts from your portfolio to cover your living expenses during a market downdraft, you must sell more shares at a lower price. It’s essentially the reverse of dollar-cost averaging, which is what you did during the accumulation phase when you invested money at regular intervals. Dollar-cost averaging involves buying more shares when the market is down or fewer shares when it’s up.

“You’re liquidating a portion of the portfolio and locking in those negative returns and creating some very bad outcomes,” says Stephen Horan, managing director of credentialing for the CFA Institute and co-author of “The New Wealth Management.”

“We call that sequence-of-return risk,” he says.

In such a scenario, it’s best to leave stocks alone to recover from the loss and to draw instead on the fixed-income portion of your portfolio. Retirement experts recommend employing 1 of these 5 fixed-income strategies to ensure enough income in a bear market. Following are the pros and cons of each method.

A solid fixed-income strategy begins with calculating your bare-bones expenses and looking at what you will receive from Social Security and any defined-benefit pension. Next, choose a vehicle to ensure enough income each year to make up the difference.

One simple option is to design a CD ladder, such as a combination of 1-, 3- and 5-year CDs, the principal amounts of which will cover your income needs in case stocks fall, says Rick Rodgers, a CFP professional in Lancaster, Pennsylvania. If the stock market is up, you can reinvest funds from the maturing CDs in higher-rate CDs rather than spending the principal.

“You’re never going to make money in fixed income; that’s not the purpose of it. After taxes and inflation, it’s break-even at best,” Rodgers says. This is particularly true in these times of low yields.

“When the market is going up, I am going to be overweighted in stocks so I will be selling some stocks and putting it into fixed income,” says Rodgers. “It smooths out the ups and downs.”

The downside of a CD ladder: low yields, no upside as the market fluctuates and continual effort to reinvest maturing CDs, says Lynn Mayabb, a CFP professional and managing director at BKD Wealth Advisors in the Kansas City, Missouri, office.

Don’t let CD penalties prevent you from withdrawing your cash early, though. Weigh the penalty against the potential gain or need, Mayabb says.

If you’re looking for a little higher yield, consider creating a ladder of bonds with sequential maturities. “Having that money come due on a regular basis eliminates the need to have a lot of money sitting in cash,” Rodgers says.

The 2 key risks to investing in bonds are interest rates rising and credit quality declining. “We address both of those issues by laddering it. Each 1 of those bonds that makes up the bond ladder is different,” he says.

It’s a good idea to stick with highly rated bonds and stable companies, and be sure to monitor your picks for any decline in quality.

One danger of a bond ladder is that you can inadvertently shift the asset allocation of your portfolio if you don’t manage carefully, Horan says. As the front of the ladder matures, the makeup of your investments shifts. On the plus side, you’ve guaranteed enough income for the critical first years of retirement, which “set the initial path” for your retirement portfolio, he says.

“Sometimes a bond ladder doesn’t always make sense, depending on what the yield curve looks like,” Mayabb says. Often, the middle-term maturities tie up your cash longer but fail to reward you with higher rates.

Instead, she favors a barbell approach, in which you divide your money equally between short-term bonds and those with 10- to 15-year maturities, skipping intermediate-term bonds altogether. “Those are the sweeter spots for getting the rates.”

Or consider laddering the coupon payments on a bond, rather than the bonds themselves, Horan says. For instance, if you need $50,000 each year, you could buy a 5-year bond with a 5% coupon and $1 million face value. At the end of the 5 years, you’d get $1 million back.

It may be more efficient to find a single bond with the desired payment structure, rather than piecing together 5 different bonds in a laddered structure, he says.

As with a traditional bond ladder, these variants may also suffer from a lack of diversification and need to be monitored for credit quality, says Panaccione.

If all this seems like too much work, consider investing in a floating-rate fund — also called a bank-loan fund — which holds a variety of bonds or bank loans with adjustable rates, giving you exposure to a range of credits. “In fixed income, you have to be realistic about how closely you’re willing to watch” credit quality, Panaccione says. “If you’re not willing to review things on a regular basis, don’t buy individual bonds.”

Unlike individual bonds, floating-rate funds have no maturity date, so you can lose principal if market fluctuations cause fixed-income investments to drop in value. “I don’t like bond funds because they don’t guarantee my principal,” Rodgers says, while conceding that they can be a good choice in some cases. “For the individual investor who’s not using an adviser, they should be using a bond fund.”

Focus on the total return of your portfolio, rather than the rise or fall in a particular fund, says Anthony Valeri, CFA, a senior vice president and market strategist at LPL Financial in San Diego. Liquidity is an issue, since these bonds don’t trade on an exchange. “If we have a recession you’ll see price declines” in floating-rate funds, Valeri says.

The classic strategy for ensuring a stream of income in retirement, of course, is purchasing an immediate annuity. This insurance product guarantees that you will receive a stream of payments for as long as you live.

The downside: You pay a premium for that guarantee and lose control of your assets forever.

“I’ve done annuities this year only because of clients demanding them,” Panaccione says. The insurance companies are “probably investing in what you would’ve invested in and charging you a premium. Is that what you need to sleep at night? Then it’s probably worth paying the premium.”

If you’re married, the question of an annuity becomes more complicated. You can buy a joint life and survivor annuity for a smaller payout, or opt for provisions that guarantee some portion of your payment goes to your spouse if you die. But it will cost you, Mayabb says.

By choosing an annuity, you lose the flexibility of changing your mind. “Once you annuitize, those assets are no longer yours,” she says. “With a bond ladder, CD ladder or investment account, if something happens and you need $20,000, you go sell something.”