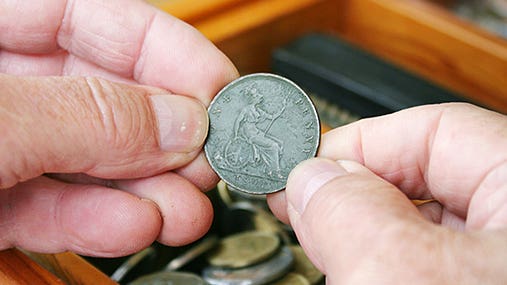 You’ve just inherited your grandmother’s antique desk, or your father’s coin collection. While the sentimental value may be obvious, the financial value may not be. You could be looking at a considerable financial windfall or just another pretty painting that’s hardly worth more than the cost of the frame.

A professional appraisal can help you decide if you should toss it or treasure it.

It pays to know the value of what you own or inherit — whether you need to purchase insurance, divide up your assets, value an estate or determine the worth of charitable tax deductions. And in many cases, an appraisal is required — to obtain insurance or to write off taxes on donated items that exceed a certain amount, for example.

David Goodis, CEO of software company Revelex Corp., hired an appraiser after his father died, and he took a look at what was in the estate. “My father had a lot of what I call ‘blind’ items: paintings, statues, jewelry — and a lot of items from my grandparents,” he says. “I had no idea what they were worth.”

An appraiser was able to help Goodis answer his immediate questions about the value of items in his father’s estate and then prevent him from making mistakes. “My first concern was, what is all this stuff worth, and second, what should I keep? What would appreciate in value? What is irreplaceable? Where is the market soft? My appraiser gave me unbelievably valuable advice,” he says.

“I was going into it blind and I was grieving, so that’s a vulnerable position. I wanted someone I could trust who is also knowledgeable. I knew there was value in the estate; I just didn’t know what it was,” he says.

Andrew Kravit, president of Kravit Estate Holdings and the appraiser who helped Goodis, says estate valuations aren’t always done after death. “Some people want to know the value while they’re alive so they can divide the estate evenly,” he says. “In a lot of situations, we help avoid complications in the family.”

Although many inheritors think they can go on the Internet and find out the value of specific items, there’s rarely enough detail to make an apples-to-apples comparison, Kravit says. “Almost everyone who inherits finds out that items are worth less than they thought. The original owners are the level-headed ones,” he adds. “Inheritors see things online and think they’re worth more, but different items look the same on the Internet. For example, if you have a Patek Philippe watch from the ’60s, you need to know if the dial is original, what the metal is and details about the specific model.”

Art, in particular, can be difficult to appraise because each is a unique piece, Kravit says. “A lot depends on the subject matter, the period, the condition; there are a lot of intricacies involved.”

Gayle Skluzacek, principal and executive appraiser of Abigail Hartmann Associates, says the process of valuing an estate can lead to some unexpected discoveries. “As people get older, they forget where they put things,” she says. “I’ve often found jewelry or coins hidden throughout the house — under a mattress or in pockets. Never give away clothes without looking in the pockets first.”

One woman came to her with a painting she had purchased in the 1960s, but Skluzacek discovered a more valuable work of art on the backside. “The painting on the front was probably worth $80,000, but the one on the back was worth $7.5 million.”

But more common, she says, is the flip side of the discovery. “People think their family history is valuable. Family history itself has no value. Just because Great Grandma had it, doesn’t mean someone wants to buy it.”

Many of the heirs she advises keep items for the sentimental, rather than monetary, value. “They appreciate the piece just because it was Mummy’s,” Skluzacek says.

That was true for Goodis. “One interesting thing that came up in the appraisal is that my father had this Roman coin set; I used to play with it when I was little,” he says. “The appraiser sent it to an agency that specializes in coins. One of the ones I was so fascinated with came back as a fake. My father had no idea. The rest were valuable.” The reduced value of the coin set didn’t matter in the end. “It had intrinsic value to me,” Goodis says.

But the appraisal process revealed more than just the going rate of the items in the estate for Goodis. “One of the fun aspects of the process for me was finding the provenance of some of the pieces and the stories behind them,” he says. “He (Kravit) was able to make it all come together for me.”

After the appraisal, Goodis was able to make a better decision about what to sell and what to keep. “I sold the things that had no value to me, like the jewelry my wife or daughter wouldn’t like and some art it made sense to sell.” Using the appraisal, he was able to properly insure the items he kept.

The cost of hiring an expert

When a valuation is necessary for an estate, it’s usually the executor who makes the decision to call in an appraiser, says Skluzacek. “If an appraiser comes in after death, the estate pays the cost and it’s tax deductible,” she says. If someone uses an appraiser while alive, it’s not tax deductible.

“In those circumstances, it usually goes along with setting up a will and dividing items equally among children.”

Most appraisers will charge an hourly fee to appraise items. If they are helping to liquidate an estate, they can charge a flat percentage on the sale. But beware, Kravit says, that it’s a conflict of interest for an appraiser to both appraise and sell items they’ve valued. They should do one or the other because otherwise they may underprice an item that they themselves buy as they liquidate the estate, taking advantage of the owner. It’s also unethical for an appraiser to charge based on a percentage of the value of an appraised item for the same reason. An unethical appraiser could place a higher value on an item for the purpose of raising his own fee.

Also remember there are no state licensing requirements for appraisers, so make sure to do your homework before hiring one. “Anyone can call themselves an appraiser,” says Skluzacek. “You have to remember you get what you pay for.”

Hiring an appraiser to value an estate

Although appraisers aren’t required to be licensed, you can check to see if they are members of one of the three associations that require members to comply with a code of ethics and keep up with the Uniform Standards of Professional Appraisal Practice, or USPAP.

“Look for those USPAP guidelines,” says Kravit. “For appraisals accepted by the IRS, that’s the end of the line.” Associations will require appraisers to pass tests and show continuing education.

Ask about the appraiser’s experience, says Skluzacek. “Find out if their appraisals have ever been challenged and the outcome. The IRS looks at any appraised item over $50,000.” Reputable appraisers will also provide references, including names of attorneys or insurance companies they’ve worked for, she adds.

Skluzacek also advises people to ask appraisers about the experience they have had with specific items in your collection. “Beware of someone who says they can do it all,” she says. “A generalist may overlook something that has value. Don’t be penny-wise and pound-foolish.”

More On How to Value An Estate: