Ask Bankrate is a recurring feature where Bankrate’s experts answer your financial questions. Visit this page for more information on how to submit your question. Click on a question here to jump straight to it.

Q1: Where should I put my savings for down payment?

If I’m saving for a down payment on my home. What type of account should I save the money in? Some people have told me money market accounts, while others have said just regular savings.

Answered by Greg McBride, CFA, Bankrate chief financial analyst: “Bank money market accounts, which are federally insured, and bank savings accounts are largely six of one, half dozen of the other — and either is an entirely appropriate choice for money you plan to need in the short term.

Q2: In what order should I tap my retirement savings?

In retirement, what is the best pecking order for use of assets? Cash, taxable accounts, tax-deferred, etc.

Answered by Greg McBride, CFA, Bankrate chief financial analyst: “Generally, it is advantageous to use taxable assets (including cash) first and allow your tax-advantaged retirement accounts to continue to grow.

There are exceptions in some cases depending on a retiree’s financial situation. For example, if they’re retiring in their late 60s and have a lot of assets in tax-deferred retirement accounts, they may wish to start using some of those assets right away so they’re not forced to take a much larger required minimum distribution (and pay the resulting much larger tax bill) at age 72. (Converting some of those assets over to a Roth each year can help mitigate this issue as well.)

Another exception would be if tapping those tax-advantaged retirement accounts sooner would allow them to defer taking Social Security so as to maximize their payments in the future. (In this instance, you’d still want to use your taxable assets first before tapping the retirement accounts). Holding off on taking Social Security is a permanent pay raise of 8 percent for each year you hold off from your full retirement age until age 70. The difference between claiming at age 62 and claiming at age 70 is even more stark — about 75 percent higher benefits at age 70 than at age 62. In those cases, a retiree might prefer to tap tax-advantaged retirement accounts earlier than the conventional wisdom might suggest.

Because advice is specific to the individual in these cases, consider working with a financial professional such as a certified financial planner (CFP) before committing to a strategy.”

The Federal Reserve plans to hold rates low for the foreseeable future. How is it that mortgage refinance rates aren’t lower than they are?

Answered by Greg McBride, CFA, Bankrate chief financial analyst: “There are a few variables at play. To start, mortgage rates are closely tied to long-term rates such as the 10-year Treasury note, rather than the short-term rates controlled by the Federal Reserve. The 10-year Treasury is at 0.68 percent, while the target federal funds rate is within the range of 0.00 to 0.25 percent.

We’re also seeing lenders charging higher rates for refinance loans than for purchase loans. Some of this is due to the forthcoming 0.5 percent Adverse Market Fee applicable to refinance loans to be delivered to Fannie Mae or Freddie Mac after Dec. 1, in which lenders are bumping up rates by approximately one-eighth of a percentage point.

But even predating the announcement of that fee, many lenders were charging higher rates because they were inundated with applications and had limited capacity to process mortgage applications. So they used higher rates as a way to meter the flow of applications, similar to merging onto a Los Angeles freeway.

The movement of mortgage rates going forward will be predicated on the longer-term outlook for the economy, inflation and interest rates and over time may prove to be more volatile than the shorter-term rates more closely influenced by the Federal Reserve.”

What is the difference between buying discount points and APR?

Answered by Greg McBride, CFA, Bankrate chief financial analyst: “Buying discount points involves essentially pre-paying interest charges and this is done to ‘buy down’ your interest rate. By paying one point (1 percent of the loan amount), you may reduce your interest rate by one-quarter percentage point. The longer you live in the home, the better the deal this will prove to be as you’ll get more years of that lower rate that you acquired for the fixed, upfront cost of the discount point. Move in the next three to four years and it is unlikely to pay off.

APR stands for annualized percentage rate and it is designed to reflect the total cost of credit — the interest rate, any points you’ve paid and the cost of obtaining the credit. This better facilitates an apples-to-apples comparison of different rate/point/fee combinations when you’re shopping around.”

Can you reinvest your RMD into your existing 401(k)?

Answered by James Royal, senior investing and wealth management reporter: “You can’t reinvest a required monthly distribution (RMD) directly into a 401(k), because contributions to a 401(k) only come out of your paycheck. However, what you could do potentially is increase your contribution from your paycheck by the amount of the RMD, so that the net effect is the same. Be sure that you’re still able to contribute to your 401(k) at all, since if you have a required distribution on one account, you may have it on others.”

Q6: Can I contribute to an IRA and receive tax benefits?

If my husband is retired and no longer contributing to his 401(k), can I contribute the max into an IRA under my name and receive tax benefits? Is unemployment considered earned income?

Answered by James Royal, senior investing and wealth management reporter: “If your husband was working, you’d be able to open and contribute to a spousal IRA, even if you weren’t working. But without a job or self-employment, you’re not able to contribute to an IRA, since your income must be earned.” 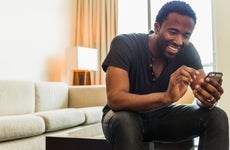 The best places to keep your emergency fund

Ask Bankrate: How much do you need in savings to buy a home?

Ask Bankrate: Should I pay down my mortgage or extend the loan term?

9 ways to save for a down payment