Investors usually buy companies they believe will make money, preferably lots of money at the lowest possible cost to the business.

Knowing that a company earns oodles of money selling gadgets or gizmos isn’t enough, though. Investors need to know how much it costs to make those sales, for instance, in the form of purchasing inventory or production. To understand that relationship and compare profitability to the past and to other businesses in the industry, you need to look at a ratio called gross profit margin.

The gross profit margin looks at revenue from sales, subtracts the cost of those sales and distills the information to a percentage.

Where do I find this information?

To find this top line information, investors turn to the financial statement. Publicly traded companies release quarterly earnings, plus an annual report. The revenue and sales information is found on the income statement.

Here’s a look at Apple’s income statement from the 2014 annual report.

Gross profit margin looks only at the impact of the cost of sales on revenue, before all the other expenses of running the business are accounted for. Expenses such as marketing and administrative costs aren’t included in cost of sales. 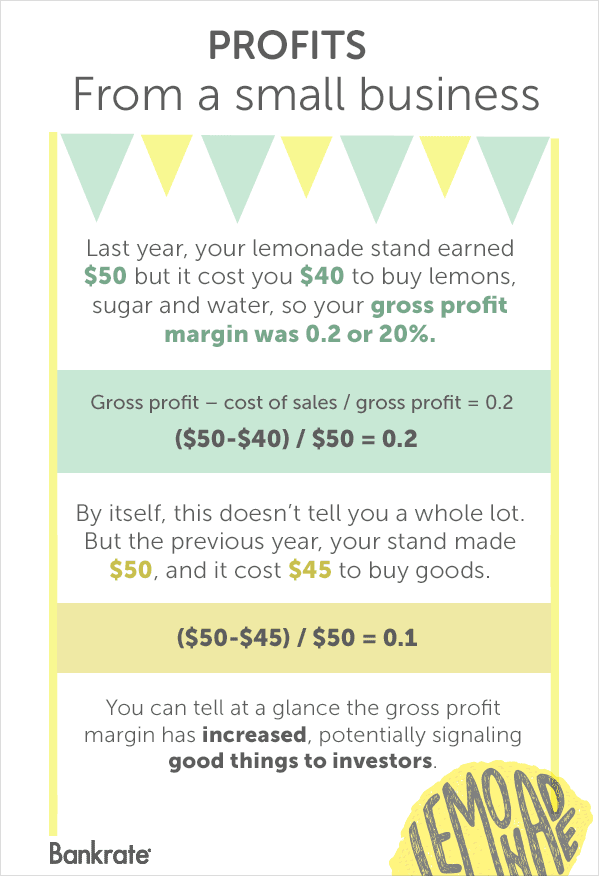 Other things to know about gross profit margin

Comparing the gross profit margin of disparate or vaguely similar businesses won’t tell you much.

“If you have 2 businesses, looking at Wal-Mart versus Tiffany for example, you would expect Wal-Mart’s gross profit margin to be much smaller than Tiffany’s. It doesn’t mean Wal-Mart won’t make more money. They may be a volume business, pay their people less, have less expenses, have more stores, pay less expensive rent,” says Keith Lanton, president of Lantern Investments in Melville, New York.

Target Corp. would provide an apples-to-apples comparison for Wal-Mart.

A gross profit margin that decreases over time would be something to note, as would profits dramatically below those of a similar firm.

“That may be a cause for concern,” Johnson says.