After the U.S. stock market bounced back from its worst December since the Great Depression, investors are generally upbeat for the 12 months ahead, according to new survey results from Bankrate.

Investors cannot be totally optimistic about the equities market because a great deal of uncertainty remains with what the Federal Reserve, politicians and the long-term future hold in store, according to the Q2 2019 Market Mavens survey. Bankrate’s survey of stock market professionals was conducted from April 22-29 via an online poll. Fifteen respondents participated.

Timothy Chubb, chief investment officer at Girard, says the biggest risk to the market is the lingering geopolitical conflicts that have arisen during the past several years.

“Investors forget that Brexit has created a great deal of uncertainty, and the recent U.S.-China trade tension has as well,” Chubb says. “Business owners do not like uncertainty and have been left facing more difficult decisions than normal regarding the future of their workforce, key offices or their supply chain.”

Several investors said interest rates, and whether the Fed decides to cut, raise or leave them unchanged, will play a major role in the stock market’s success going forward.

“Interest rates are always a major driver for financial markets,” says Patrick J. O’Hare, chief market analyst at Briefing.com. “A residual factor not to be dismissed in the year ahead, however, is the 2020 election campaign. Political posturing will be a major part of the narrative, but more so in 2020 when the race for president is better defined and the market can ascertain if existing policies are likely to remain intact or if there is an increased risk of seeing less-favorable tax policy and regulatory efforts.” 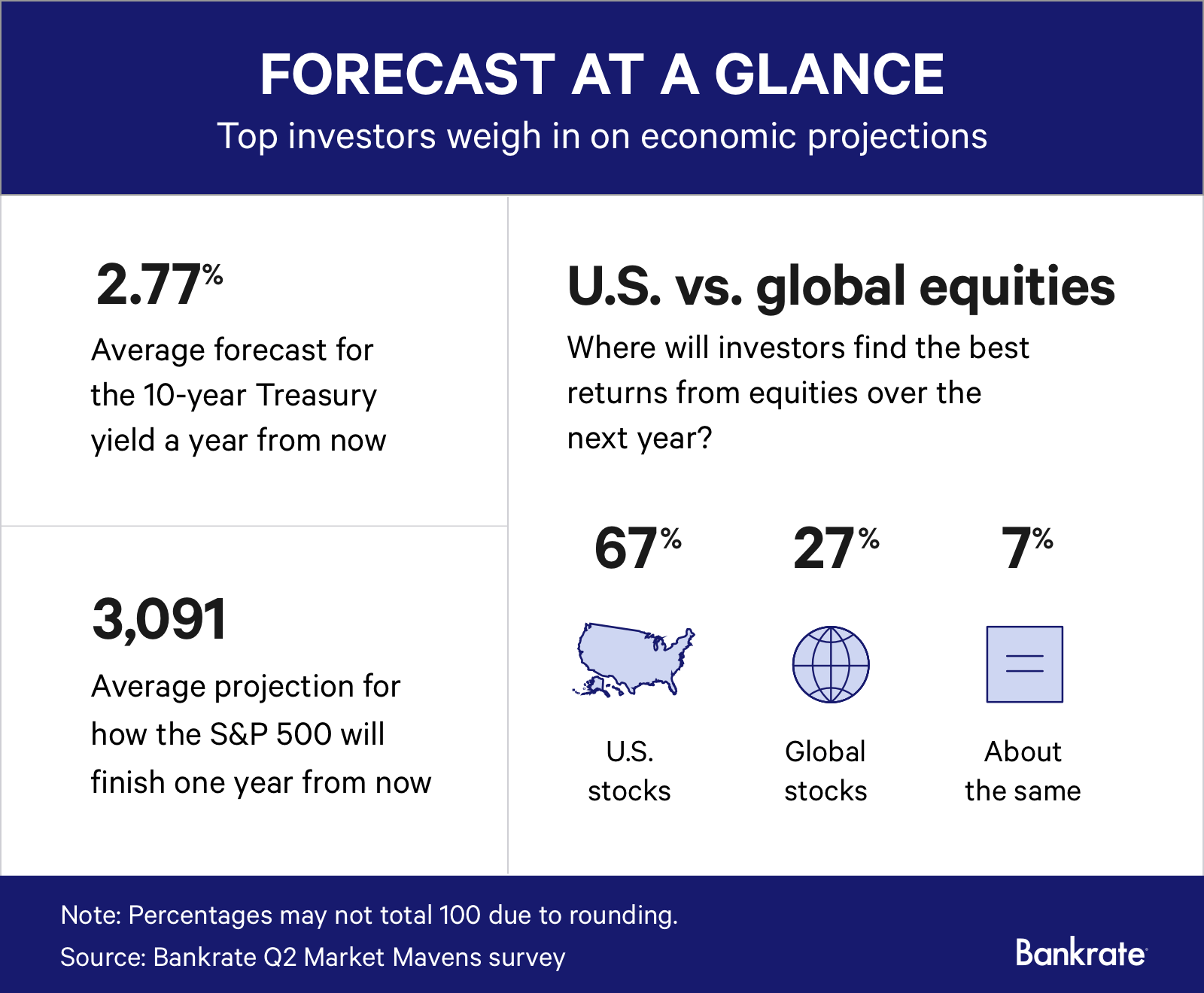 On average, the Market Mavens see the S&P 500 hitting 3,091 one year from now. That would represent a 5 percent increase over Tuesday’s close of 2,945.83. The benchmark index has already seen a 19 percent surge since markets opened Jan 2.

The crystal ball is not giving a clear message on what the market will look like past the second quarter of 2020.

A small majority of the investing experts surveyed (47 percent) predict returns from equities will be lower during the next five years. That’s contrary to the 40 percent of respondents who foresee equities remaining about the same as their historical average.

“We will certainly have a recession here in the U.S. over the next five years, so at some point, earnings will drop and that will likely hit valuations as well,” says Brad McMillan, chief investment officer at the Commonwealth Financial Network.

“Demographics points to growth of the U.S. economy as millennials start having families and establishing households. This, in turn, should be a driver for investment growth,” Forrest says.

Only one respondent expected returns from equities during the next five years to be higher than their historical average. Another person indicated they were uncertain or did not have an answer.

Analysts seemed split at the beginning of the year on whether to look to U.S. stocks or global equities for the best returns. Now with a few months under their belt, most experts (67 percent) have settled on U.S. stocks as the winner going forward.

“The relative performance of markets, as well as a number of important economic and earnings numbers, suggests quite strongly that U.S. stocks will continue to outperform,” says Hugh Johnson, chairman and chief investment officer at Hugh Johnson Advisors.

Just over a quarter of respondents (27 percent) say global equities are the way to go. And one respondent predicts returns from U.S. and non-U.S. shares will be about the same.

Industry professionals are looking to growth stocks to provide the greatest returns in the year ahead. Sixty percent of respondents favor growth equities – shares of a company expected to increase in value rather than pay higher dividends – compared with 20 percent who are more optimistic about value offerings.

“As long as the bull market remains intact, you will see growth outperform value; however, during periods of market pullbacks, value will outperform growth for those shorter periods of time,” says Chris Zaccarelli, chief investment officer at Independent Advisor Alliance.

Twenty percent of respondents expect returns from growth and value stocks will be about the same.

While the Federal Reserve appears to be holding interest rates steady for the foreseeable future, the Market Mavens see a modest increase in the yield of the 10-year Treasury note.

On average, they see the yield at 2.77 percent a year from now, compared with 2.51 percent, where it was Tuesday.

Rising 10-year Treasury rates are thought to create a headwind for the stock market. The impact of rising rates can be felt throughout the economy, making debt costlier for some mortgage holders and those with credit card balances.

The Market Mavens survey suggests that investors should enjoy further gains even after the strong rebound seen for the market since Christmas Eve of last year, says Mark Hamrick, senior economic analyst at Bankrate.

“Over the next half-decade, there might well be a recession given the nearly record run enjoyed by the current expansion,” Hamrick says. “For long-term investors, including those saving for their retirement with many years to go before the end of their work, any concern about the potential for lower returns should not deter them from striving toward their financial goals.”