Who manages the family money? 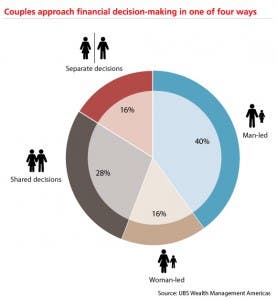 Who is the financial decision-maker at your house?

At mine, it’s my husband. I don’t roll over and play dead because I’m interested in money management and have spent a long time managing my own money. But my husband is a certified public accountant with actuarial credentials and years of experience managing other people’s money, so I defer. UBS Wealth Management Americas says women like me shouldn’t be so passive.

UBS recently surveyed couples and found that when you ask them if they share financial decision-making, the overwhelming majority — 99 percent of men and 92 percent of women — say they do. But when UBS pressed them for details, a different picture emerged. In couples of every age group from millennials up to the World War II generation, men tend to manage the investments while women take care of paying the bills, and together they make decisions on things like buying a house. This isn’t necessarily wrong, but there are nuances worth considering, especially when it comes to retirement planning.

Don’t get left out

Among the 40 percent of couples where men make most of the decisions, women often report that they feel uninformed and they tend to worry more about whether they will have enough money in retirement.

Being at least somewhat involved in the process is very important, says Jeff Scott, director of market research for UBS Wealth Management Americas. He says both the study and the experience of UBS financial advisers suggest that, “Women who were not part of the decision-making process feel less confident about retirement, while women who are engaged in decision-making during the years leading up to retirement know where the money is coming from and feel more confident that they’ll have enough to lead the kind of life they want to lead.”

UBS also found a higher degree of conflict between spouses in retirement when the husband controls the income — 30 percent have argued over how much money to spend in retirement.

Scott points out that the uncomfortable reality for nearly all women is the likelihood that they will eventually have to live with the consequences of their failure to understand the couple’s finances because they will outlive their spouses.

“Women are on average two years younger than their spouses and live on average five years longer. If they haven’t been involved, they know they are going to have to get involved at some point. If you are depending on your investments and you don’t understand them, you are going to be very concerned about how this will work out,” Scott says.