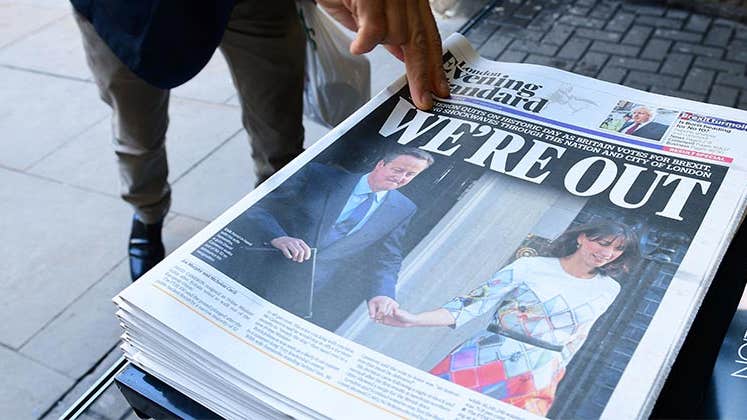 If ever there ever was a time for not thinking about the money you’ve been stashing for retirement, it’s now.

Even before Britain’s decision to exit the European Union was confirmed, the markets started shaking. On Thursday, ahead of the Brexit vote outcome, the Dow Jones industrial average was down more than 400 points for a moment, then recovered.

When the markets reopened Friday morning, the Dow immediately plunged more than 500 points.

What does all this mean for you, the ordinary person saving for retirement? First, it was a good day not to look at anything financial. A friend in the financial services business said he kept seeing people checking their accounts on their phones. Then, he would watch them freak out.

“Almost every individual investor is going to think about this the wrong way,” says Michael Delgass, chief executive officer and managing director of Sontag Advisory in New York.

Instead of asking yourself what is going to happen to the value of your retirement accounts, Delgass says the question to ask is: How does this play out for me financially, years down the road? “That’s the fundamental question in retirement: looking far down the road and making some assumptions that stand up.”

Everybody loves a bargain

Brexit might be bad for savers, but in fact, it could be good for retirement investors.

First, all the stuff in your 401(k) is now down in value. The good news? You are buying more investments at a discount.

Did you hear that right? Yes, Delgass says. The magic of so-called dollar-cost averaging means you keep putting money in, and when stocks dip in price, you are essentially getting to buy more of those stocks for the same dollars that previously purchased a smaller amount.

It‘s not that bad!

There is no reason to panic, says Catie Hogan, owner of Hogan Financial Planning in Columbus, Georgia, though she adds that it’s understandable, especially when stocks are plummeting 5 minutes after the opening bell.

“I really do think these are short-term fears,” Hogan says. The everyday investor needs to remember that the markets tend to overreact.

More good advice: Turn off your TV every now and then. “The news cycle makes it seem apocalyptic, but if you’ve consulted with a financial planner and you have questions, contact that person,” Hogan says. “Don’t let these things scare you!”

Always be prepared for the worst

For those people near retirement or actually in it, Delgass says planning and stress-testing your portfolio is key. A portfolio should be able to handle another 2008.

“You have to come to terms with the fact that that will probably happen,” he says.

If you didn’t already plan for a big downdraft on Wall Street, you cannot fix it by taking action. You can only make it worse. Selling stocks now? Same as grabbing a falling knife, Delgass says.

So there you have it.

Don’t over-react to over-reacting markets; don’t watch too much news; and don’t try to fix what may be only temporarily broken.