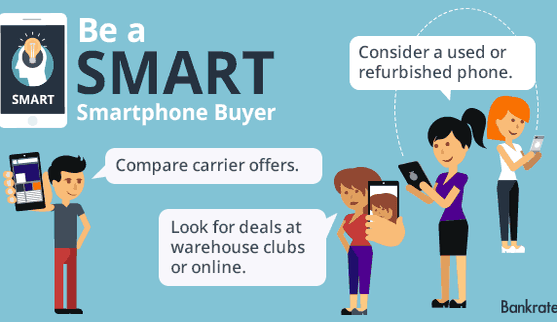 In late summer, Sprint became the 3rd major mobile phone carrier to drop phone discounts and upgrades on 2-year contracts. Verizon and T-Mobile announced similar plans earlier. What does that mean for consumers?

It means many of us will either pay the full price of the phone upfront or agree to an installment plan. It could change how long we hold on to our phones, as well.

“The incentive for grabbing a new phone every year no longer exists,” says Maggie Reardon, senior writer at CNET.com. “That’s because we’ll no longer be paying $250 for a $600 piece of equipment.”

This new landscape means most of us are going to be buying unsubsidized phones on our own. Shopping is more complicated because phones are available everywhere from our carrier to Costco. How can we get smarter about buying our smartphones? Here’s some expert advice on how to buy a phone in the new, non-subsidized world.

All the major carriers offer monthly payment options that allow you to pay for your phone over time. You’ll need to compare monthly phone payments and overall wireless costs from carrier to carrier. Make sure to look at them separately. In some cases the phones can look like a great deal but the service won’t be or vice versa.

When Apple announced its new 6S iPhones in September, the many new bells and whistles included Apple’s financing plan, which allows customers to spread out payments on a new phone for 24 months. The company also is offering an iPhone upgrade program which, for an extra fee, provides a new iPhone every 12 months.

Before you jump into either of these options, be sure to ask yourself whether you want to stick with Apple. Once you sign up, you won’t be able to grab an Android phone that catches your eye or looks like a better deal without paying off the remaining balance of your iPhone.

Costco and Sam’s Club are offering phones with 2-year contracts at a discount along with mail-in rebates. John Oldshue, founder of SaveOnPhone.com, says eBay is another good venue for phones. But, he adds, always go with a reputable, well-reviewed seller.

Ask yourself: Do I really need the latest version?

Importantly, the last generation of a phone — Apple or Android — sells for significantly less the minute the newest model is introduced, says Oldshue. You can find even better discounts for phones 2 generations back. Keep an eye on new product introductions. That’s the time to buy older versions of new phones from either your carrier or other dealers.

That said, if you buy a phone more than 2 generations old or hang on to your phone for more than 2 years or so, you may get frustrated by not having access to the newest features and technology.

“I caution going too far down the chain,” Reardon says. “There may be advancement in software in the new phones. If your phone is too old you may find the software is no longer supported.”

Same timing applies here. You can find the best deals for used and refurbished phones just after new versions are introduced and people wanting to upgrade start flooding the market with their old phones. With refurbished phones, manufacturers buy back old model phones, test them and resell them, often with a warranty. You can often save between 20% and 40%.