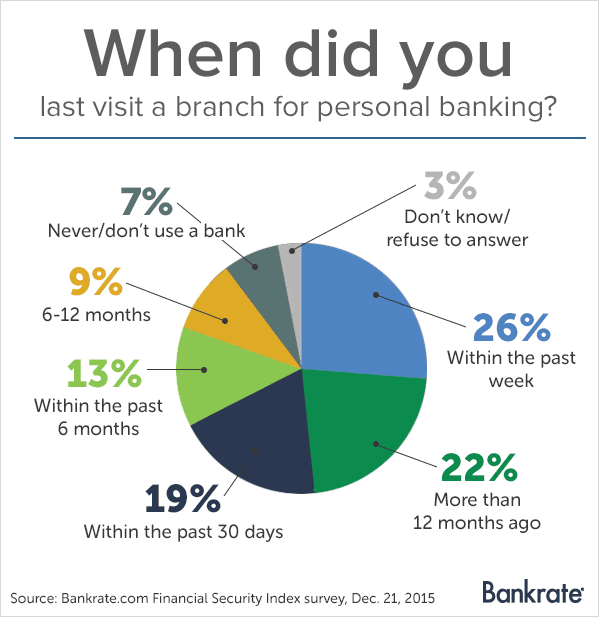 In this era of electronic banking, it’s still not all that unusual to find yourself waiting in line at your local bank branch.

Visiting a brick-and-mortar bank or credit union is more common than you might think.

While the rise of online and mobile banking have made it convenient to do most of our routine financial transactions remotely, it doesn’t mean that bank branches are about to go on the endangered species list.

In a recent Bankrate survey, 45% of Americans said they had visited a bank or credit union branch to conduct personal financial business sometime in the past 30 days. And that does not include using an ATM. Fewer than a quarter of the population hasn’t been in a bank branch within the past year.

Furthermore, about 4 in 10 millennials have been in a branch within the past 30 days. The difference was fairly even across age groups, ranging from the 41% for those youngest respondents to 48% for people between the ages of 50 and 64.

Branch use varies by income

The highest income households — presumably those with the most numerous and active financial relationships — were most likely to have visited a branch in the preceding month, with the likelihood declining at lower income levels.

Among those making less than $30,000 a year, 13% said they don’t use a bank at all, which is higher than any other income group.