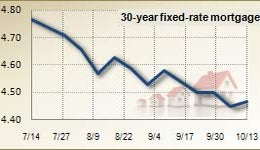 Mortgage rates barely changed this week, with the rate on the 30-year fixed lifting just above last week’s record low.

The benchmark 30-year fixed-rate mortgage rose 2 basis points this week, to 4.47 percent, according to the Bankrate.com national survey of large lenders. A basis point is one-hundredth of a percentage point. The mortgages in this week’s survey had an average total of 0.35 discount and origination points. One year ago, the mortgage index was 5.32 percent; four weeks ago, it was 4.54 percent.

Those three mortgages — the 15-year fixed, the 5/1 ARM and the 30-year jumbo — fell to record lows in the history of Bankrate’s weekly survey.

This week, it became clear the Federal Reserve is inclined to pour more cash into the economy in an effort to make interest rates go down and prices go up. The Fed would accomplish this by starting another round of quantitative easing — a fancy term for buying Treasury notes. By paying for billions of dollars’ worth of Treasuries, the Fed would add billions of dollars to the money supply. In theory, this would cause a drop in interest rates, including mortgage rates.

The Fed could begin its next round of quantitative easing as soon as early November, after its next scheduled rate policy meeting Nov. 2-3. Quantitative easing isn’t a sure thing, but members of the rate-setting Federal Open Market Committee meeting have already discussed how they would go about it.

That discussion was described in the minutes of the Sept. 21 rate policy meeting, released this week. There was some disagreement over the trigger for quantitative easing — whether the Fed should act if the jobs picture doesn’t get better, or if it should wait until unemployment gets worse.

Although the Fed members didn’t agree on whether more monetary stimulus is necessary yet, they did agree on how they would do it — according to the minutes, they would buy long-term Treasuries.

They also discussed “purchasing additional long-term assets.” Last year and early this year, that meant buying mortgage-backed securities. That’s what it would mean this time, too.

The Fed’s minutes say some participants noted “that the economic benefits could be small in current circumstances” — an indication they don’t believe mortgage rates have much room to move lower.

Even with rates at or near modern record lows, home sales are almost at a standstill. John Walsh, president of Total Mortgage Services, in Milford, Conn., has a suggestion for goosing home sales: Raise the conforming limit nationwide.

In most of the country, the maximum amount for a Fannie- or Freddie-backed loan is $417,000. That’s known as the conforming limit. The limit is higher in expensive locales, such as Los Angeles and New York City. In the priciest places, the limit is $729,750.

He says underwriting standards “have made the loans much more creditworthy than they were in recent history.” Walsh thinks increasing the conforming loan limit across the board would spur more purchase activity and increase refinancing.

“That’s something that could be done very quickly and help out a lot of people and pump a lot of money into this economy,” Walsh says.