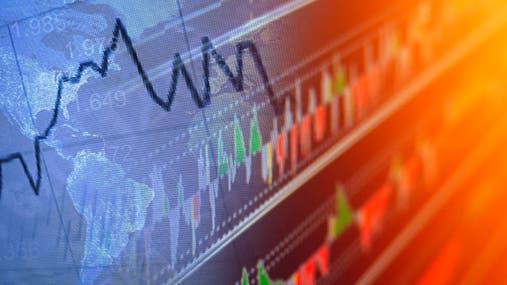 Life is full of risks. Crossing the street can be dicey, driving is unquestionably perilous and nearly everything you eat may cause cancer or heart disease. We bravely engage in these potentially life-threatening behaviors on a daily basis with barely a thought.

When it comes to taking stock market risk, though, the average investor behaves more like a doomed supporting character in a B-horror movie: utterly terrified and unable to make any sort of rational decision. Instead of escaping, investors’ panicked blunders lead to their own grisly demise.

Fleeing stock investments when the market starts a serious slide is like floundering into the obvious trap laid by the supernatural chainsaw killer. It feels like a daring getaway when in fact, it’s just the opposite.

Selling low locks in losses forever, and there’s slim opportunity to catch the market on the rebound. The mantra of the misguided investor — “sell low, buy high” — doesn’t lend itself to optimal investing.

But people bail out of the stock market at just the wrong time over and over again.

The illusion of safety

The irony is that trying to stay safe often leads to worse outcomes for investors. An annual study called the Quantitative Analysis of Investor Behavior, or QAIB, by research firm Dalbar shows that individual investors regularly underperform the market — even the bull market of 2012. Investor behavior drives returns because people consistently do the wrong things, such as selling out of mutual funds on bad news. In the most recent QAIB, Dalbar reports that over the past three years, the average equity investor received a return of 7.63 percent compared with 10.87 percent for the Standard and Poor’s 500 index.

“People need to rethink risk,” says Greg McBride, senior financial analyst at Bankrate.com. “Too many people don’t save enough to begin with and then they further compound their shortfall risk by investing too conservatively because they are afraid of what amounts to a short-term pullback.”

It boils down to this: Accepting a lower rate of return in the interest of staying safe increases other risks over time, most notably the very real danger of not being able to retire when you’d like.

How not to bail out of the stock market

To avoid the cardinal sins of novice investors, construct an investing plan that accounts for your ability and willingness to take risk. Use a retirement calculator to target the approximate annual return you’ll need to reach retirement and design a portfolio that delivers at least that return with the lowest possible risk. And that’s the easy part: Sticking with the plan is where amateur investors run into trouble.

“Serious investors — the foundations and institutions — the people that truly have a focus and strategy, they don’t move in and out of the markets day to day or minute to minute. That is not the way you make money in the market. All you do is incur trading and sales charges,” says Michael Masiello, president of Masiello Retirement Solutions in Rochester, N.Y.

He advises clients to avoid the TV when things get ugly.

“I usually tell them to turn off the evening news and go out for dinner,” Masiello says.

Why does bad investing happen?

Why do perfectly functional people turn out to be lousy investors? In a nutshell, it’s the factory settings in the human brain that are to blame.

“Most people only buy after they see a trend that has already taken place, and generally it is toward the latter part of a trend when it looks like everyone else is making money. The mind seeks patterns and people believe that the future is going to look like the past,” says Michael Gayed, CFA, chief investment strategist of Pension Partners and co-portfolio manager of the ATAC Inflation Rotation fund.

Behavioral finance calls it a “recency bias.” Basically, people are wired to believe that what happened in the market yesterday and today is what will happen tomorrow. That’s one reason why individual investors are not generally on the leading edge of a market development. Instead of anticipating what’s coming next, they jump on the bandwagon that’s already tootling down the road.

“One reason that people do worse than a buy-and-hold strategy is that the media focuses attention on the assets that have done best,” says Jay Ritter, Cordell Professor of Finance at the University of Florida. “For instance, in 2006 there were many stories about people getting rich off of real estate. Of course, 2006 turned out to be the peak before a disastrous real estate market collapse.”

Sad to say, but by the time an investor hears of a market move on the news, it’s a sign that the trend is on the way out.

“The trend is right on average, but it is wrong at the extremes. When you look at studies of fund flows and you look at the way individual investors who really do not follow the market day to day behave, those people tend to get in at the extremes,” Gayed says.

The combination of today’s 24/7 news world and the tendency of investors to overweight recent events does not lend itself to rational analysis of calamitous world events.

When the market goes south, investors can hardly be faulted for thinking maybe this time is different; maybe this is the time that everything falls apart. To bail out of the stock market seems like the rational thing to do.

Of course, that kind of “this-time-is-different” mindset could have applied to the dot-com bust or the correction between 2000 and 2002, McBride says.

“At that point we hadn’t seen a decline like that in decades, and the financial crisis (of 2008) was even worse,” he says. “Perspective shows us that with sharp drops, even unprecedentedly sharp drops, the economy and the markets return to profitability and we have seen a rebound. In some cases, the rebound came much quicker than forecast.”

Stepping back to look at the big picture, it’s clear that the market goes up over very long periods of time. On a small scale, it’s a mess. Case in point, from 1993 through 2013, the S&P 500 served up an average 7 percent annual return, not including dividends, says McBride.

You could do a lot worse than a 7 percent return every year: If you’re the typical investor, you probably did.