As an investor, are you concerned that you’ll lose out if you buy bonds at today’s low interest rates, just before rates begin rising?

You might want to consider a step-up bond that offers the possibility of an increasing interest rate over time. That way, when interest rates start going up, you still have the chance to keep up and won’t have to give up potential income gains.

Although this sounds like a good deal, these bonds, issued by a variety of corporations and government agencies, also come with added risks in addition to typical risks, such as the danger that the issuer may default. 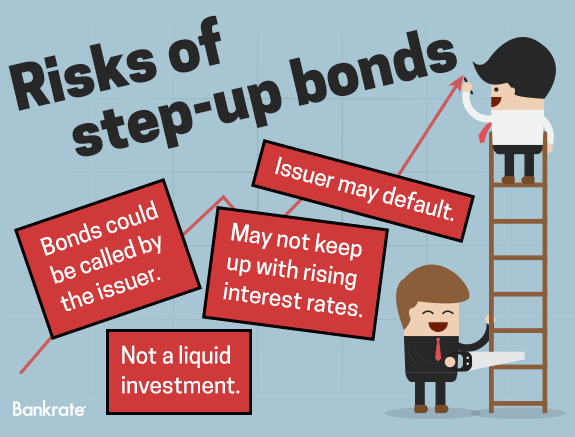 On a bond with a step-up feature, the interest rate could start out at an initial rate, say 2%. The interest rate would then start to rise at defined intervals. For instance, 2 years after the issue date it could go up to 3%. And 2 years after that, it could rise further to 4%. The specifics of the intervals at which the rates would rise and to what extent would depend on the terms of each bond offering.

“It can be literally soup to nuts as far as how the interest rates adjust or change,” says Joseph Eschleman, an investment officer with Wells Fargo Advisors in Sacramento, California. “It depends on how the issuer structures that particular bond and that particular deal.”

Even though you might start out at an initial interest rate that could be a bit lower than the yield offered by another comparable bond without this step-up feature, you could still come out ahead. That’s because the step-up feature would provide the possibility of a higher blended interest rate over time.

Drawback: Bonds could be called

Another risk is that interest rates could go up higher than you anticipate during the period that you hold the step-up bond. In that event, you could be tied down to a lower interest rate rather than getting higher market rates. In this case, of course, the issuer has no incentive to call the bond and pay out higher interest rates by issuing newer bonds, so you’re stuck. And if you decide to sell before it matures, you would end up selling your lower interest rate-bearing bond at a discount to its face value.

Mary Talbutt, a fixed-income portfolio manager with Bryn Mawr Trust Co. in Devon, Pennsylvania, says investors who buy these bonds are taking a calculated bet. “You are sort of playing the likelihood of your forecast versus how the particular instrument will act,” she says.

In case you want to sell your bond before maturity, you also face the risk of trading in a market that is not very liquid. If your step-up bond is not listed on an exchange, which is typically the case, you will have to find a buyer on the secondary market.

And if you don’t find many buyers for your step-up bond, you will likely face a decline in the price you can get for your bond. There could be a wide spread between the price you ask for and the price a buyer is willing to pay for the bond.

“The liquidity on selling these step-up bonds is less than it would be on a traditional fixed-income bond,” says Greg Ghodsi, managing director of investments for Raymond James’ 360 Wealth Management Group in Tampa, Florida. “And the reason is that you would have to make multiple calculations to say, ‘What is the fair price of that bond in a rising interest rate environment?’

“It’s more complicated than a straight fixed-income (instrument) that would pay for 20 years,” he adds.

Some bank-issued certificates of deposit come with a step-up feature. These instruments not only provide the same potential benefit of an interest rate that moves higher over time, they also offer the protection of insurance from the Federal Deposit Insurance Corp. But their yields are paltry right now.

Like their bond counterparts, CDs also may be called back by the issuing bank. You could buy step-up CDs at your local bank, but they are more likely to be available through a broker-dealer when a bank wants to raise money. And if you have to sell a brokered CD on the secondary market, in this case, too, you face the prospect of taking a hit on your investment.

Are step-up bonds or CDs for you?

Step-up bonds could work for investors who don’t mind adding on a less liquid investment in anticipation of getting a higher yield. They may be appropriate for retired investors with a buy-and-hold strategy who want a hedge against rising rates. Step-up CDs could also benefit younger investors who are interested in the FDIC insurance coupled with a potentially higher yield.

“Typically, I don’t look to a step-up to hedge against the threat of rising interest rates because of the call provision,” says Eschleman. “The one thing I don’t want a client to do is own a step-up bond or CD and have a schedule of what looks like pretty attractive interest rates, only to have it yanked away from them 2 years from now because the issuer is able to call it.”