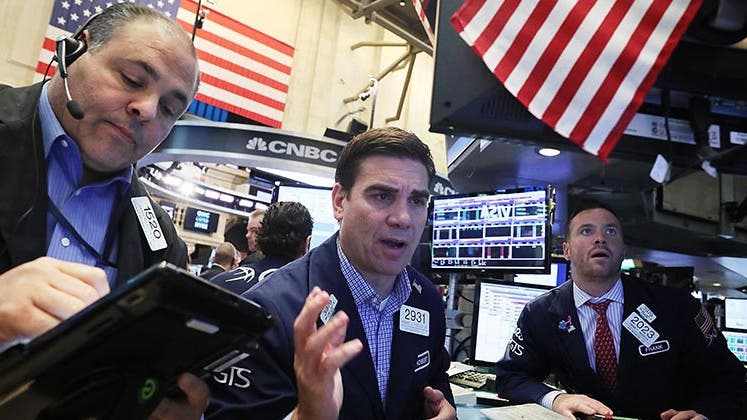 Traders work on the floor of the New York Stock Exchange in New York City on June 24, following news that the United Kingdom had voted to leave the European Union. The Dow Jones industrial average quickly fell nearly 500 points on the news, with markets around the globe plunging. (Spencer Platt/Getty Images)

Financial markets got a jolt with the surprising Brexit vote. And while that has upended the political landscape for the United Kingdom, it doesn’t appear to have prompted a radical shift for the money management outlook, as indicated by Bankrate’s quarterly Market Mavens Survey.

This time we conducted 2 surveys:

Of 12 investment professionals responding to our 2nd round, only one indicated he was changing his outlook for the benchmark S&P 500 index. He’s Oliver Pursche, CEO with Bruderman Asset Management.

“We have reduced our target from 2,175 to 2,100 for year-end 2016 based on our expectation of a slowdown in cap ex spending and renewed pressures on U.S. multinationals due to a resumption of the U.S. dollar rally,” Pursche says. “We do not expect the impact on markets in general to be disastrous but do expect fears surrounding the impact of Brexit to act as a cap to equity prices.”

Pat O’Hare, chief market analyst at Briefing.com, says, “The market had its fundamental challenges before the Brexit vote and it would have had the same challenges even if the ‘Remain’ camp prevailed. Low growth, weak earnings, and high valuation — that’s just not a great combination for high returns.” 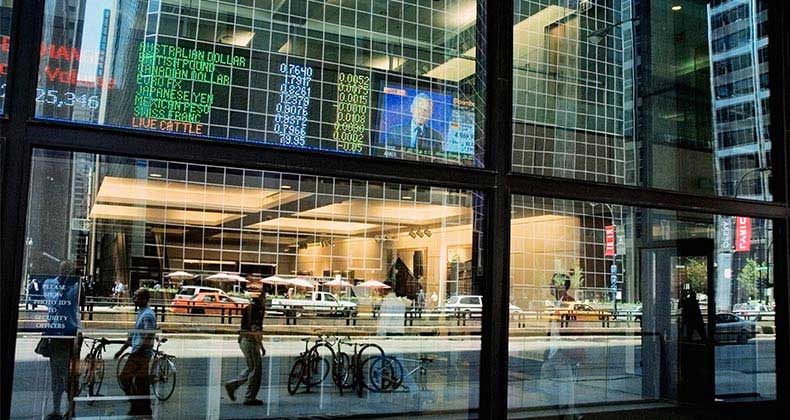 Asking experts: Is it time to kick some assets?

Either way, if you are looking to make money from the stock market over the next year, it could be more challenging than seen in recent years. On the other hand, interest rates are low with the Federal Reserve, other central banks and markets providing support. “Inflation is weak, the job market is better but not mended and the outlook of the economy is uncertain. How in the world could you even consider raising rates in the next few months with those facts?” asks Jeff Reeves with InvestorPlace.com. Reeves maintains his previous market outlook, saying, “Same old, same old. The Brexit vote isn’t binding, isn’t going to immediately change things, and is simply a representation of broader economic ills such as low wages, stagnant growth and other challenges in the West — including here in the U.S.” 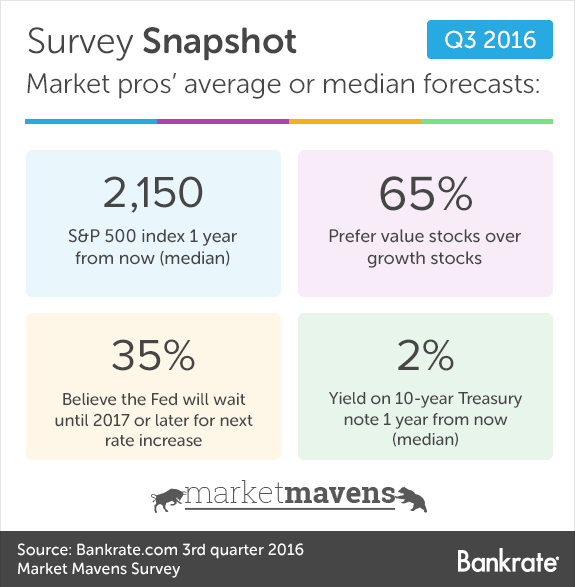 If the recent past has demonstrated anything, it is that uncertainty and volatility will be with us. Among the big unknowns still to be resolved is how investors, consumers, savers and borrowers might be affected by the U.S. election.

“Bull markets don’t die of old age, they die of fright. What investors fear the most is the possibility that the U.S. will fall into, or be dragged into, a recession. We don’t see a recession coming in the next year,” says Sam Stovall, U.S. equity strategist at S&P Global Market Intelligence.

Flat stocks: About two-thirds of the experts expect the stock market to be higher over the next 12 months. While that percentage was down slightly compared with the previous quarterly survey, about a quarter of them look for the market to edge lower. Among those favoring flat was Kim Forrest with Fort Pitt Capital Group, who says, “We are rangebound, given the worldwide flat growth we seem to be caught in. So, news will drive the markets in the range we are currently in.”

U.S. market or global preferences: Here, 41% of our mavens look for the U.S. stock market to perform best, while 29% thought the global equities outlook was better. The remainder, 29%, says the result would be about the same.

Bear market odds: The odds of a big downturn in the stock market (defined as 20% or more) are elevated, but below levels in our previous survey. Taken together, the experts put the bear market risk at 30%. And nearly three-quarters of the survey respondents set the odds of a bear market over the year at less than even. “A bear market unfolding in the next 12 months is likely tethered to a recession unfolding in the next 12 months, which we see at this juncture as a 30% probability,” says Briefing’s O’Hare.

One who sees elevated risk of the bear claw is Mark Willoughby, senior vice president at Hilliard Lyons, who worries aloud about a mistake on the part of policymakers. “Since markets are so fixated on the Fed, a misstep by the central bank or a perceived loss of effectiveness or credibility will be extremely negative to the market,” says Willoughby.

ADVISER SEARCH: Saving for your child’s college? Search today for a financial adviser who can help.

One of the experts advises against worry about recession while suggesting there could be some help for the economy coming from the new president and Congress. “I am anticipating tax reform and infrastructure spending,” says Barry Armstrong, president of Armstrong Advisory Group.

Growth versus value stocks: When asked where they’d put their money over the next year, value was the clear choice among most of the experts.

“Value is much more reasonably priced relative to growth, and better positioned to succeed in what looks increasingly like a continued slow growth environment,” says Brad McMillan, chief investment officer at Commonwealth Financial Network. 65% went with that pick, while 29% thought the returns from growth and value would be about even. Just one investment professional thought growth will be the place to be.

Federal Reserve on hold: Even before the Brexit vote, the survey respondents thought that the odds of a rate hike coming from the Federal Reserve were low in the near term. When asked when such a rate boost might come, only 30% thought it would come during the third quarter. A nearly equal number point to the final 3 months of the year and the remainder saw it coming in 2017 or later. As she downplays the likelihood of a rate hike anytime soon, Marilyn Cohen, president, Envision Capital Management says the central bank has lost respect. “The Federal Reserve has not only lost its credibility, its lost its way. They have not been data dependent as advertised. The Board has changed their rules as they’ve gone along,” says Cohen.

10-year Treasury yield: Here, the outlook for low rates remains strong as well. When asked where the benchmark yield would be in a year, there was a range of 1.5% to 2.6% offered. That’s lower and more narrowly defined than previously. Before the 10-year Treasury yield dropped sharply after the Brexit vote, Chuck Self, chief investment officer with iSectors, predicted an eventual rebound in yield “as the prospect for stronger economic growth in 2017 becomes clearer.”

U.S. election effects: The November election looms large on the political landscape, but how it affects the markets might be another issue. We asked the pros whether there’s anything in particular they’d counsel regarding what investors should do ahead of the election. Chuck Carlson, CEO of Horizon Investment Services, says investors should look beyond the balloting. “History shows markets tend to move higher, regardless of who is in the White House. To alter a long-term investment program to reflect who you believe will win the White House is a fool’s errand.”

Similarly, Hugh Johnson, chairman and chief investment officer for Hugh Johnson Advisors, says it is difficult to make decisions based on the election alone. But, Johnson adds, “If there will be a significant policy change, it will be reflected in the trends in stock market prices to include the trends in sectors, stocks representing different capitalizations, interest rates, the yield curve, and quality spreads collectively.”

Finally, on the post-Brexit global outlook, there’s a higher risk that more nations will look for the EU exit sign, notes Robert Brusca, chief economist at FAO Economics. “There is now bad blood between the U.K. and the EU and things could get acrimonious and in that event, negotiations could break down. The possibility of a more damaging scenario lurks in the wings. Already Spain is reviving claims to Gibraltar; France wants to renegotiate a deal that keeps migrants in Calais and out of the U.K. The list will get longer.” Even so, Brusca is sticking with his forecast for “modest gains for one year out” for stocks.