It should come as no surprise that all investments are not created equally. But every investment offered by 401(k) plans should be in the best interest of plan participants. Investments that aren’t in their best interest tend to be needlessly expensive and underperform over time.

Unfortunately, that distinction isn’t limited to any one type of asset; instead, there are many individual stinkers.

It’s tricky to identify these investments.

For individuals, the fees associated with a mutual fund or exchange-traded fund can offer clues as to how the investment will pay off in the long run. But focusing on fees isn’t a foolproof strategy for outperformance or risk management.

People have varying needs and risk thresholds, and one size rarely fits all when it comes to 401(k) investment choices.

The best investments in the world of 401(k) plans should be those with the lowest cost relative to the riskiness of the investments and the level of returns. It’s no easy feat.

Very generally, the best funds for 401(k) plans, according to the strategy Davis uses, are those that temper their efforts to reach for big returns in favor of less risk.

“We would give up a little upside return in return for a manager that takes less risk on the downside. When you’re choosing investment options for other people’s money, it’s more important to protect on the downside rather than reach for the upside,” he says.

“Every plan is different. What I might offer a lawyer would be different than what I offered to ditch diggers,” Davis says.

Low expense ratios, low turnover and broad exposure to many stocks or bonds typically make index funds a perennial favorite among many investment advisers for at least part of a portfolio.

Turnover refers to the buying and selling that goes on within the fund. The cost of the trading isn’t reflected in posted fund fees known as the expense ratio, but nevertheless they are passed on to investors.

An index fund will deliver all the ups and all the downs of the market it holds, but there are investors who may prefer a less exciting ride.

“There are times where you want to actively control the risk. How much return are you getting versus how much risk?” asks David Gratke, founder of Gratke Wealth in Beaverton, Oregon. “In some cases, having active management makes sense to control risk.” 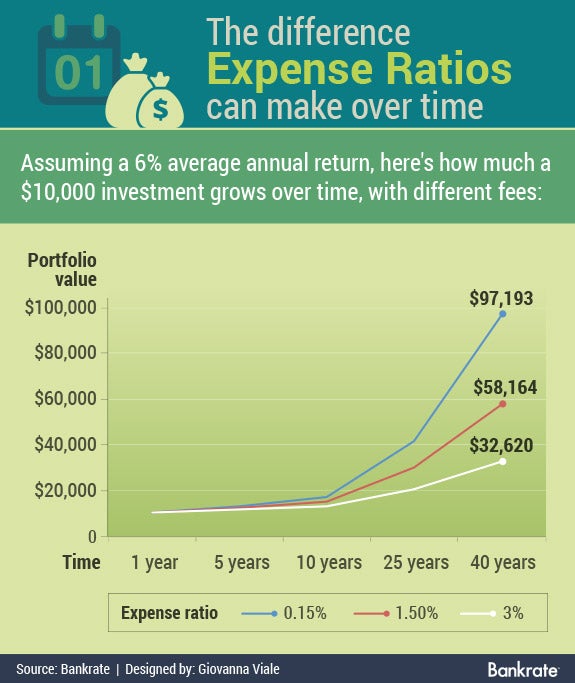 An actively managed fund, as opposed to an index fund, has a manager or a team of managers who make decisions about what investments to hold within the fund. Investors seeking active management should have an idea of what need that fund will fill in their portfolio.

Every investment manager or adviser to 401(k) plans may have different strategies for finding investments for plan participants. For instance, Davis says his formula includes “a suite of actively managed funds in growth and value styles.”

Plus, he looks for “a suite of index funds without style bias for core investments, and then a suite of target-date or risk-based funds.”

Target-date funds to set and forget

Target-date funds solve a lot of problems for 401(k) investors, including asset allocation and rebalancing. Plus, the funds automatically shift the mix of stocks and bonds as retirement looms.

The way the investments transition toward the retirement date is known as the “glide path.”

The type of business may dictate what type of target-date fund is most appropriate for those particular workers.

Gratke says he sometimes sees a mismatch between glide paths and the employee population.

“Let’s just generalize, but for an employee population with higher-than-average incomes, the 401(k) bucket might be the last one to be tapped, so it would be appropriate for the glide path to go ‘through’ retirement,” he says.

A less skilled or lower-paid group of workers may not have piles of money from which to draw an income. For them, market volatility near retirement age would be undesirable, which could make a glide path “to” retirement more suitable.

Insurance-based investments may be the most controversial.

There are two kinds of annuities that are used in 401(k) plans. The first is the group annuity.

“It is a way of structuring a plan for a group. What can make it good or bad are the fees in the annuity contracts. With reasonable fees, they can be a great set of investments. It depends how it is structured,” Davis says.

“The second is what’s being talked about in the future. Participants can put a portion of their contribution towards guaranteed retirement income,” he says. “That is the future evolution of the business; usually people are talking about the other kind. (Group annuities) have been an area that can be abusive in terms of fees.”

For individuals, annuities do tend to be more expensive than mutual funds, says Craig Morningstar of Dynamic Wealth Advisors.

“Often for an annuity inside of a 401(k), the total disclosed and undisclosed fees can range from 2.5 percent to 4 percent,” he says.

By comparison, an index fund might have fees of about 50 basis points, or 0.5 percent, according to Chicago-based investment research firm Morningstar.

Change is constant in the retirement plan business. In the ’80s, 401(k) investment choices consisted of only a couple of options. Now, employers may offer 100 or more mutual funds in their plans.

Managed accounts are also growing in popularity, as many people don’t feel up to the task of choosing and managing investments and prefer professional help. Assets in managed accounts at the top eight providers grew about 74 percent between the second quarter of 2012 and the same time this year, according to Cerulli Associates.

Here’s how they work: Service providers offer to manage plan participants’ investments, usually for an added fee on top of the usual fees paid for funds. As of now, there’s no industry standard for managed accounts. Some service providers include funds and asset classes not found in the 401(k) lineup, such as commodities, according to a June report from the Government Accountability Office.

The GAO’s report concluded that managed accounts can offer participants an edge, but only if returns beat the fees charged by a wide enough margin to make them worthwhile.