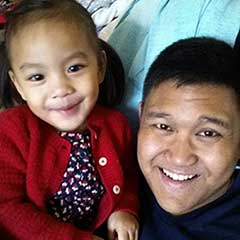 Paolo Astorga, age 26, of Bethesda, Maryland, was awarded $3,000 as the grand-prize winner of Bankrate’s Money Makeover. He is the proud father of a 3-year-old daughter. Paolo earns $56,000 per year as an accreditation specialist for a health care nonprofit, where he has been working since graduating five years ago from the University of Maryland with a bachelor’s degree in economics.

First and foremost, Paolo wants to achieve debt-free living. His short-term goals are paying off credit card debt and his car loan, along with building up emergency savings. Paolo says his longer-term goals include buying a house and saving money for his retirement and his daughter’s education.

These are the lean years for Paolo, a time to which many others can relate. He’s in his first job out of college, has a young child and is working to further his education in a way that will propel him to higher earnings in the future. Along the way, he has incurred credit card debt. As a result, his budget is tight.

He has no student loan debt from his undergraduate years, but he is paying out of pocket to pursue a certificate in accounting. It typically costs $450 per class, and he takes one class per semester. This is paid with an upfront fee and then regular monthly installments that often end up going on his credit card at 12% interest. No tuition reimbursement is available through his employer. Nevertheless, he expects to complete this program in spring 2016 and eventually sit for the CPA exam.

He has racked up $7,500 in credit card debt, which constitutes 45% of his credit line, and is paying interest at 12%. He is living with his parents on a temporary basis and has been paying $600 to $800 every paycheck against this debt to get it paid down as quickly as possible. However, once he moves out of his parents’ house in the next few months, his budget will be much tighter, and making progress against this debt will be much slower.

In addition to considering taking a second job on a part-time basis, Paolo also will get some much-needed breathing room in his budget when he pays off his car loan next spring, freeing up $402 per month.

He has started to save for retirement and emergencies but is currently not able to make much progress.

Paolo has $1,700 in his emergency savings, plus an additional $510 in an account for his daughter, which can be used for emergencies or saved for her future education. Any birthday or Christmas money given to his daughter is earmarked for her account. Both accounts are at his credit union, earning a very low annual percentage yield. His emergency savings has been depleted by car repairs and other unplanned expenses, but he has been building it back up by depositing $100 to $200 after each paycheck, depending on what is left over, while living with his parents. He aims to have $3,000 saved by the end of the summer, but his moving and initial setup expenses will essentially wipe this out.

Paolo is deferring 6% of his income into his workplace 401(k) plan, and his company matches an additional 4.5%. He is taking advantage of the full employer match. His current account balance of $24,000 is allocated 89% in the target-date 2055 fund, with the remaining 11% split between large-cap growth and small-cap blend funds. The deferral is similar: 90% into the target-date 2055 and 5% each into large-cap growth and small-cap blend.

Paolo originally started a traditional IRA and wisely converted to a Roth IRA, although he is not currently contributing. His $8,400 IRA account balance is appropriately allocated, with 93% toward equities and 5% to bonds. But his equity allocation is spread across 15 different individual stocks and exchange-traded funds, or ETFs. There is a significant amount of overlap among asset classes. He even has 2% of the account in a call option position. There is no need to get fancy, especially with just 12% invested internationally and in an account where every buy or sell, no matter how small, triggers a commission.

He also has a Coverdell Education Savings Account, or ESA, for his daughter. Although he hasn’t funded the account recently, the account is primarily earmarked for college, as the public schools are very good in the area where they live. He has thought about opening a 529 college savings plan but has never looked into it. The $1,350 account balance is allocated 88% across a range of individual stocks and ETFs, and 12% in cash. Like the IRA, the ESA is held in an account where every buy or sell triggers a commission and, because of all the small positions, any trades chew up an inordinate percentage of the holding. For example, even on the largest holding in the ESA, 2.3% of the proceeds would be surrendered just via the commission if sold.

Reallocate the existing 401(k) balance and future deferrals solely into the target-date 2055 fund, as the large-cap growth and small-cap blend funds duplicate exposure that is already obtained via the target retirement fund.

Paolo should see if he can qualify for a 0% or other low-rate balance transfer offers to accelerate the credit card debt repayment. Check out the free search engine at Bankrate.com to find the best promotional rate offers.

Roll over the Roth IRA to a firm where a large menu of ETFs can be bought and sold commission-free. He’ll then be able to reallocate the entire account for a minimal commission cost. Aim for an allocation of 35% U.S. large cap; 15% U.S. mid and small cap; 45% developed and emerging international markets; and 5% to a bond index fund.

Finally, Paolo should activate his free two-year subscription to myBankrate for winning the Money Makeover. This will help him monitor ongoing improvement in his creditworthiness as he pays down debt and positions himself to eventually buy a home.

Paolo can apply the $3,000 Money Makeover winnings to his credit card debt, along with any earnings from a part-time job. Once his car loan is paid off in March 2016, he can increase his monthly credit card payments, putting him on target to pay off the credit card debt by September 2016. At that point, he’ll be enjoying debt-free living.

Paolo can channel any pay increases into a higher 401(k) contribution, particularly once the accounting certificate is received in spring 2016. After the credit card debt is paid off and as the emergency savings cushion is becoming healthier, he can resume contributions to the Roth IRA.

For his daughter’s college savings, he can leave the ESA as is and utilize a 529 college savings plan instead. But he should hold off on opening and contributing to a 529 until he’s been able to pay off all the debt, make significant progress on rebuilding his emergency savings, and can max out at least his annual IRA contribution — if not also the 401(k).

Take a photo or video of one of your financial goals using #mastermoney on Twitter, Instagram, Vine, Tumblr or upload directly to our page.