Most consumers have likely come across a “buy one, get one free” promotion at some point. Do credit card issuers offer such deals? Apparently it is possible. That’s been the experience of reader Aimee.

She writes, “Hi, I was approved for a new credit card and my bank has mailed me two credit cards instead of only one. They have different account numbers and a different line of credit amount ($300 less on the second one). I would like to know what I should do with the extra credit card that would be best for my credit score.”

On the credit score front, one immediate boost if you do get two credit cards is that your overall available credit goes up. If you own two cards and one has a $5,000 credit line and the other one a $5,300 credit line, your total available credit would be $10,300. That means that when you carry a balance your credit utilization ratio will be lower.

Considering that your credit utilization ratio accounts for as much as 30 percent of your credit score, the second card would certainly enhance your credit profile if used responsibly.

Enhanced credit access is a plus, but you may not have a choice in the matter of keeping your two cards. Typically, banks don’t issue two of the same credit cards when you apply for a credit card and have controls in place to prevent this from happening.

Perhaps you submitted two applications instead of one due to a browser glitch and the bank processed both of them and issued two different cards instead of the sole card you should have gotten.

If you start using both cards, you could hear from the bank at some point telling you that it is canceling one of the cards. A bank can close a credit card account at its discretion at any time without much notice. This could come about if a consumer’s credit profile has changed or if they haven’t actively used the card for a while, for instance.

The Consumer Financial Protection Bureau advises, “Most card issuers reserve the right to close an account at any time, and are permitted to do so under the law.” The Credit Card Accountability Responsibility and Disclosure Act of 2009 says issuers only need to give 45 days’ advance notice if they are going to make significant changes to your card account, such as changing an annual fee, for example.

Negotiate with the bank

Valley Bank, the issuer of Aimee’s credit card, declined to comment on the matter when asked about this situation. A spokesperson for the bank said it would prefer to “resolve directly with the customer” and advised her to reach out directly to the bank.

Aimee, it seems it would be in your best interest to follow up with Valley Bank and try to resolve this matter with it. For one, you could ask for a bigger credit line if you get to keep only one card. Otherwise, if you start using both cards you will likely hear from the bank at some point advising you that it is canceling one of them.

If you get two of the same cards from a credit card issuer after applying for a card, it is likely due to an error on the part of the bank. Even though banks have controls in place to prevent this sort of error, it does happen occasionally. Banks can use their discretion to cancel your credit cards at any time.

Once a bank gets wind of your two-card situation it is likely to cancel one of them, leaving you in the lurch if you had counted on that enhanced credit line. You should proactively reach out to your issuer and ask for an enhanced credit line on one card in case the bank won’t let you keep both cards.

SHARE:
Written by Poonkulali Thangavelu Senior Reporter
Read more from Poonkulali
Poonkulali Thangavelu is a senior writer and columnist at CreditCards.com and Bankrate, addressing debt and credit card-related legal and regulatory issues.
Edited by
Brady Porche
Edited by Brady Porche Editorial Director
Brady Porche is an editorial director for Bankrate Credit Cards and CreditCards.com. He has two decades of professional experience as a writer and editor.
Brady Porche
Editorial Director
Reviewed by
Grace Pilling
Reviewed by Grace Pilling Editor
About our review board
Grace Pilling
Editor 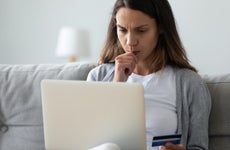 My new card has a lower credit limit than I expected 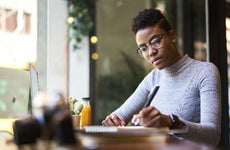 How to choose your second credit card 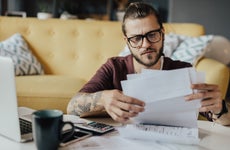 What happens if you don’t pay your secured credit card bill? 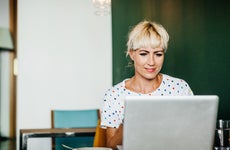